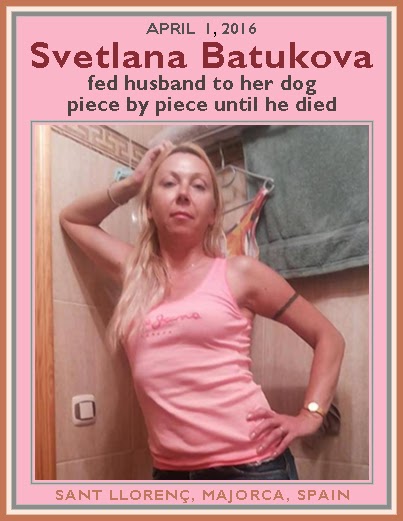 On April 1, 2016, Svetlana Batukova, a 46-year-old Russian-born newlywed living in Sant Llorenç, Majorca, Spain slowly butchered her German husband, Horst Hans Henkels, 66, with a butcher knife – feeding strips of his flesh to their dog until he took his last breath. Henkels could not shout for help because he was recovering from surgery on his trachea, rendering him speechless. He bled to death after being repeatedly stabbed and after pieces from his arms had been carved off to be fed to Svetlana’s American Staffordshire bull terrier.

It is Alleged that the murderess had previously approached a man in a bar to murder her husband for about $57,000.