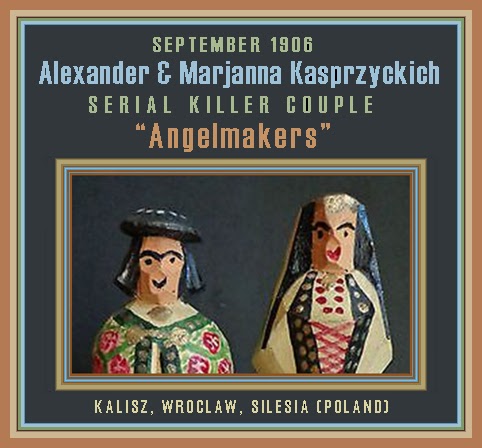 FULL TEXT: Tenants of the Siarkiewiczowej House in Czaszki neighborhood often took note in amazement that a couple living there, Alexander and Marjanna Kasprzyckich, frequently arranged funerals for children. In the space of three years the couple buried five children, two of them secretly. It was later discovered out that the Kasprzyckich took in children to rear. Suspected them of criminal acts, one of the tenants of the house reported what had been observed to government officials, which, on Friday [Sep. 21, 1906] afternoon, resulted in an investigation of the premises by delegated commissioner Klimov, along with Dr. Sikorski and […] Remiszewskim, for report to prosecutors.

At the Kasprzyckich apartment, shared with a certain Stanislaw Marjańskim and Anna Bartosik, was found half dead, extremely emaciated child, which as it turned out two weeks ago Kasprzycka received from Hendli Sznaper, from the Jewish hospital, and that the child was born in hospital a woman named Rivka Heinochowicz of Sieradz. For the room and board and upbringing of the child Heinochowicz gave Kasprzyckich couple 17 rubles. A few minutes following the arrival of the authorities yet another child met its death in their presence.

With the incontrovertible evidence of the dead child, the Kasprzyckichs were arrested.

Stanislaw Marjańskim and Anna Bartosik disclosed that disgusting dealings of the  Kasprzyckich couple had been going on for three years. During these three years, three children were legally buried at the cemetery. One of them, which was stillborn, had lain in the apartment for a few days under a table. One was secretly buried by Anna Bartosik in the cemetery, and one Jewish child named Jojne was taken away in the night. No child in the Kasprzyckich quarters lived longer than two or three months. The Kasprzyckich would give the children watered-down milk, a pint per day, to which was added a decoction of poppy husk (laudanum), to keep them in a sleeping state. Even after the roommate repeatedly pointed to the mishandling of the children to Marjanna still kept Kasprzyckich up her odious practices.

One mother [of a child she paid the couple to look after], a woman named Marjanna Owczarek, learning that her child was sick, received any, but apparently from poisoning and exhaustion on the second day died.

After the revision in the apartment Kasprzyckich found a small bottle "laudanum".

Wrocław (pronounced Vrots-swaf; commonly known by its German and English name Breslau before 1945) is the largest city and capital of Lower Silesian Voivodeship, Poland. Wrocław is also the historic capital of Silesia. With a population close to 630,000 and a metropolitan figure well over a million, Wrocław is the fourth largest city in Poland, and is among one of the republic's major manufacturing, banking, industrial, tourist and cultural centers. Thanks to hosting events such as the Euro 2012 Championship and the 2016 European Capital of Culture, Wrocław is gaining a larger European and international profile, drawing in a growing amount of tourists for its historic city center, picturesque bridges and islands, and the city's relaxed liberal culture. The city is also known for its high quality of life.[Wikitravel]