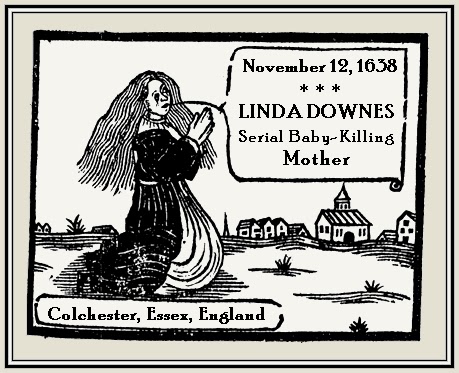 Depositions of Linda Downes of Colchester, Essex, accused of a series of three infanticides, were taken on Nov. 12, 1638. Most modern descriptions of the case do not state the woman’s name.

EXCERPT (1 of 3): Colchester was notorious in late-seventeenth and early-eighteenth-century England as the site of a multiple infanticide case: in the late 1630s, one of its inhabitants “buried one child, poisoned another, [and] smothered a third – all of them illegitimate. During a series of depositions following her crimes, she confessed to trying first to abort her children with the help of her lover, who “by phisick [had] often assayed to destroy the same child within her,” but did not succeed.

EXCERPT (3 of 3): Thus a Colchester woman who was made pregnant in the mid-seventeenth century took 'savin' and other 'phisick', but neither was successful. When she again conceived illegitimately, her lover, an amateur physician, 'by phisick often assayed to destroy the same child within her', but again unsuccessfully. (28: The whole extraordinary set of depositions is contained in a set of examinations taken on 12 November 1638, in the Colchester Examination Book for 1619-45, at County Hall, Colchester. I am grateful to Mr J. A. Sharpe of the University of York for the reference.) [From: Peter Laslett, Karla Oosterveen and Richard M.Smith (eds.), Bastardy and its Comparative  History (Arnold, 1980); p.71: Alan Macfarlane, “Illegitimacy and illegitimates in English history.”]