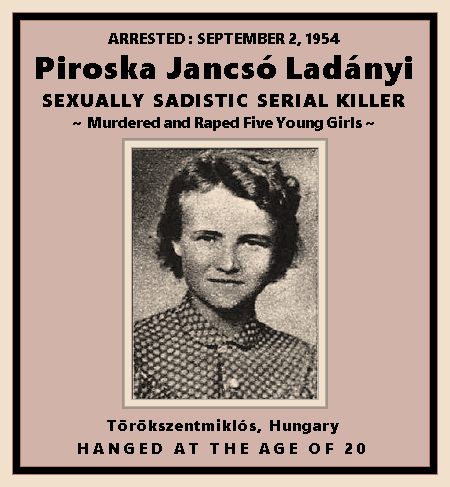 This case represents an extremely rare “recorded instance”: “Moreover, there is no recorded instance of a female necrophile killing to achieve her goal of a dead and supremely compliant partner, unlike the men who litter the pages of lurid tabloids and academic journals alike. There is no female equivalent of Jeffrey Dahmer or Ed Gein.” [Helen Gavin, “Evil or Insane? The Female Serial Killer and Her Doubly Deviant Femininity,” 2014, Transgressive Womanhood. Inter-disciplinary press, Oxford, pp. 49-60.]

Törökszentmiklós, Hungary – By the age of 14, Piroska Jancsó Ladányi, was servicing occupying Soviet soldiers at the Ladányi farmhouse, as was her mother, receiving miniscule in-kind payments. Her mother had been promiscuous from an early age. Piroska’s story includes incest with a brother and the mutilation of animals.

Piroska’s mother, Borbála, described her daughter as troublesome and abusive to other children: “I always had trouble with Piros because of the kids. Whenever went down the street with her, whichever child was next to her, she would strike in the face or back for no reason. It was all about hitting others, causing others pain. When she stuck a child, she was pleased with herself.”

Piroska also abused animals – from her confession: “I forced the genitals of two cats together. They scratched me, so I tied them together with twine, and I managed to have sex between them in a violent way. After that, I killed them and dissected them, with a particular focus on their genitals.”

Piroska, at the age of 15, persuaded her then six-year-old brother to give her oral “sexual pleasure.” She found confirmation of the method of her experiment she tried with her brother in reading pornographic novels.

There was hysteria in the entire region. Talk of the ages-old Blood Libel – anti-Jewish claims of human sacrifice of gentile children – spread. Another rumor was that Jewish director at a local funeral home was using the hearse to abduct children. Superstitions about the number “13.” – date of the first disappearance and the age of three of the victims – were evoked by some. An inaccurate rumor about an arrest of a suspect attracted a mob of a thousand to the police station. It was the first instance in Hungary of a large agitated mob since the Russian occupation had begun 9 years earlier. This resulted in the Szolnok County police department taking over the case.

On October 13, 1953, Piroska lured Marika Komáromi (11) to the farmhouse, strangled her to death with an electric wire, undressed her, and then, after sitting on her face, she exercised her sexual desires. She pulled dragged the corpse with the help of a rope tied around his neck and threw it into a well-covered with sheet metal on the porch of the house. Piroska was wearing her victim’s shoes when later questioned by police.

On June 12, 1954, Piroska she met Hoppál Piroska (13), who was selling chickens on the market, brought her to the farmhouse, where she strangled her with a wire. Piroka stated: “I looked at the genitals of the corpse, licked it, and then stuck a carrot in my own genitals, and had an orgasm. Then I measured the depth of a broomstick by inserting the end of a broomstick into his genitals. Later, I rubbed my genitals against the dead girl’s protruding tongue, while holding on to the corpse, and climaxed again.” She then threw the body into the well.

On August 9, 1954, Piroka lured Simone Irene (17) to the farmhouse and strangled her with an electric wire and then threw the body into the well. Pirtoka said she was motivated to kill her because she had had several sexual encounters with her and was afraid the secret might be revealed.  The murder took place because she had been sexually established with the girl several times before and was afraid to unravel their secrets.

On August 11, 1954, Marika Botos (13), had arrived in Törökszentmiklós for a holiday. Piroka met her at the bus stop, and then, with the pretext of helping to carry her luggage, joined her. She persuaded the girl to go with her to the farmhouse, where she strangled her with a cotton cord and then had sex with the corpse before discarding it in the well.

On August 14, 1954, Piroka lured Katalin Szőke (13) from the vicinity of the railway station. this time Piroka strangled her with a trouser strap, and then engaged in sexual activities with the corpse and threw it into the well. The military (Russian) strap was found on the neck of the fifth victim. Police suppressed this politically dangerous piece of evidence.

On September 2, 1954 István Balázsi went to a field in order to retrieve a bag of clothes left behind during a triste. Piroska saw her and offered her brandy. Balázsi dosed off in the grass. She was awakened by Piroska strangling her with a wire. Mrs. Balázsi fought off her attacker and rushed to the police.

Police questioned her and she immediately admitted the attempted murder. Yet police made no connection between the crime before them and the mystery of the missing girls. Police went with the victim to the field where the attempted strangling murder took place, but the bag of clothes was missing. Then they went the Ladányi farmhouse and searched for the missing bag. In the process, they accidentally discovered a well on the porch that was covered with a metal sheet. In it were found the decaying corpses of the five, now almost unrecognizable, missing girls.

The local police were terrified of occupying Soviet forces. They learned that from a young acquaintance, Ilona Czene, that, on August 27, Piroska, drunk had confessed to Ilona that she had killed 11-year-old Mária Komárom with her mother's help. But Ilona also told police she saw a Russian commander exiting the Ladányi house. The police told Ilona to keep this fact a secret.

Confession 1) Piroska made a full confession, but falsely claimed she had male accomplices. She first said that she had committed the murders with Raffael Józsefné and Irén Simon's suitor, Sándor Fekete, and a Soviet soldier. Police detained the two named individuals, but it soon became clear that they were not in the city at the time the crimes were committed.

Confession 2) At her second interrogation, Piroska no longer spoke of Raffaelna or Black. She made it clear that the killings were due to Nikolai Bogachov, a Russian soldier.

Confession 3) The following day, Piroska made a new confession that no longer featured Soviet soldiers, but told of her attraction to women. She said this had been felt since the age of 15, triggered by illustrations in a book of pornography she bought at the local market. She cited a picture in which women met their sexual needs with one another and another showing a dog licking a woman’s genitals. Piroska said: "Initially, I gave different stories because I was ashamed to reveal the real reason for my act. That's why I also said that I got the little girls for Russian soldiers and then strangled them so that they would not reveal what happened to them. I was ashamed to admit that I killed the girls because of my perverted sexual desires. I'm still very ashamed of that.”

~ Prosecution: Charges Based on Final Confession as Sole Killer ~

On September 20, 1954, the Szolnok County Prosecutor's Office prepared the indictment against Piroska Jancsó Ladányi and Borbála Jancsó for murder and other crimes.

The rial took place September 29, 1954 in Szolnok, behind closed doors. The court issued an explanatory statement: "According to the investigative data, moral and sexual issues are to be discussed, the disclosure of which would be contrary to the public interest". Only the parents of the murdered girls permitted in the gallery. Two other girls testified that Piroska wanted to cheat on them as well, and other witnesses reported that the Piroska had been selling the clothes of the murdered children.

The complicity of Piroska’s mother, Borbála Jancsó, was also established.

Piroska Jancsó Ladányi was found guilty and to death and Borbála Jancsó to 2 years and six months in prison.

The judgment was appealed. On October 14, 1954 heard the case. the defendants maintained their previous testimonies. The prosecutor called for a heavier punishment for Borbála Jancsó's responsibility and complicity. Piroska's defender asked for the girl's pardon because the accused was young and had been "raised by the street." Piroska, expressing remorse, requested a lighter sentence. Following a recess Piroska asked to change the confession upon which the original trial was based. She now identified her mother as an active accomplice.

Piroska testified: “The reality is that my mother also knew about my actions. ... In the second case [June 12, 1954 – Piroska Hoppál, 13], mother told me to bring someone from the market who has good clothes and money if possible. For the others, I did it because I needed money and I wanted to satisfy my sexual desire.” She also claimed the victims’ hands and offered the cord to bound them. “No matter how much I earned, my mother wasted everything. She threw away my money in men, confectionery, drinks. I was left completely naked, so I thought about getting clothes for myself. My mother kept pushing for money and prodding me.” The court found the claims plausible because it was thought Piroska lacked the physical strength to commit the murders and move the bodies.

As a result of the new testimony, the verdict was changed: Borbála Jancsó was also sentenced to death. Borbála was, however, granted a commutation by the Presidential Council and given a sentence of life imprisonment. The daughter’s sentence remained unchanged: death by hanging.

On December 12, 1954 at 10:11 a. m. Piroska was hanged in the courtyard of the Szolnok prison. At 10:22, according to the doctor’s report, her heart had stopped beating. Her body was removed from the gallows 30 minutes later.

Her mother, Borbála, died in prison in the late 1960s.

1953 – Piroska sentenced to six months in prison for theft; after a month, during the general amnesty, she was released. Two other similar prosecutions occurred later on.

Aug. 27, 1954 – later witness Ilona Czene reports that Piroska, drunk, confessed on Aug. 27 to her that she had killed 11-year-old Mária Komárom with her mother's help. She mentions seeing a Russian commander exit the Ladányi house. Police are afraid of Russians, so they tell Ilona to keep facts secret.

Oct. 14, 1954 – Barely two weeks after the first-instance verdict, case was heard by the Supreme Court.

Sep. 20, 1954 – Szolnok County Prosecutor's Office prepares the indictment against Piroska Jancsó Ladányi and Borbála Jancsó for murder and other crimes.

Sep. 29, 1954 – trial; Szolnok, behind closed doors; "according to the investigative data, moral and sexual issues are discussed, the disclosure of which would be contrary to the public interest". Piroska Jancsó Ladányi sentenced to death; Borbála Jancsó sentenced to 2 years and six months in prison.

Oct. 1954 – appeal; As a result, the verdict also changed: Borbála Jancsó was also sentenced to death, and she is not sent to gallows just because in her case the Presidential Council exercised her right to pardon and changed the woman's sentence to life imprisonment; sent to Kalocsa prison.

Oct. 1954 – Piroska, in last testimony before the Supreme Court, states that her mother knew about his actions. 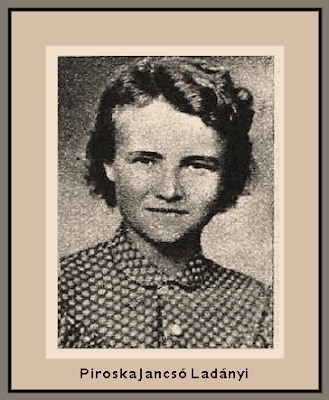 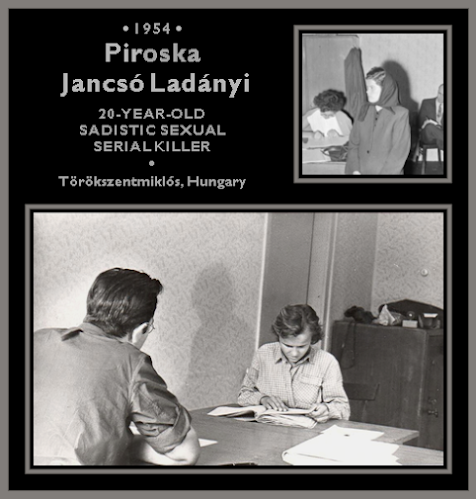 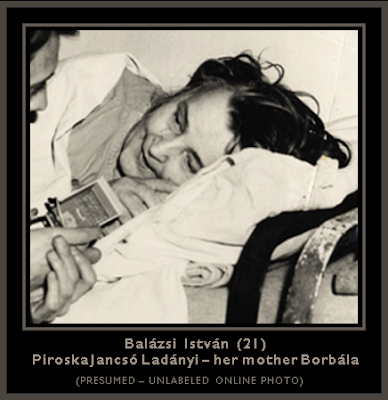 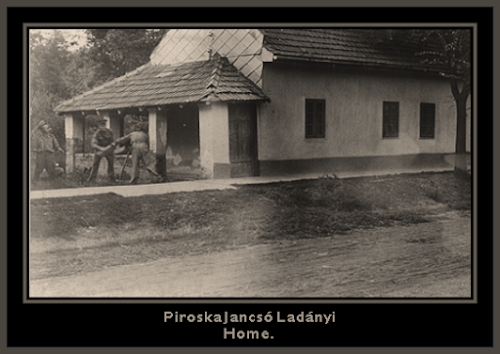 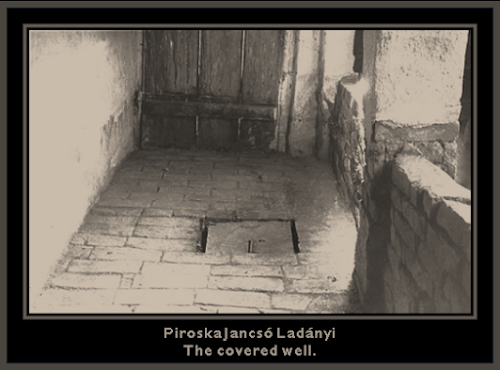 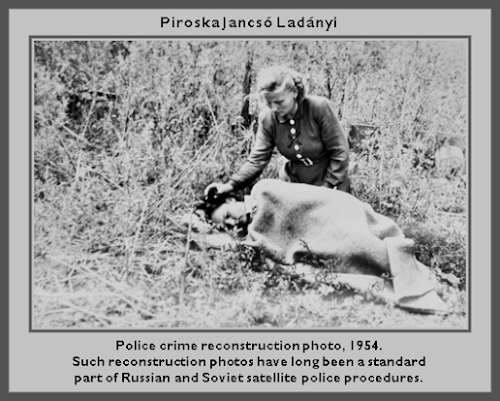 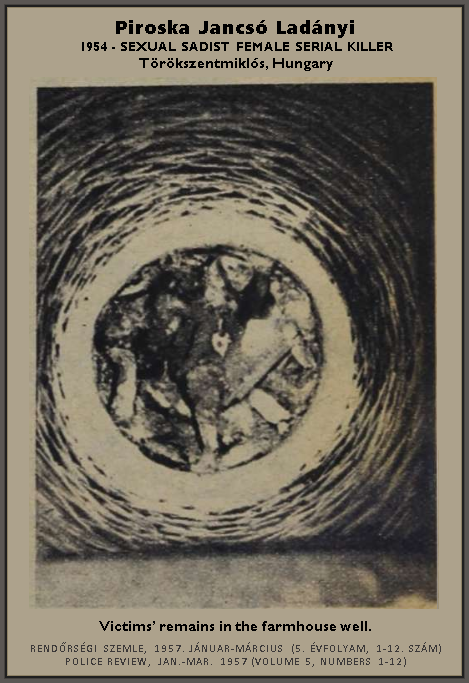 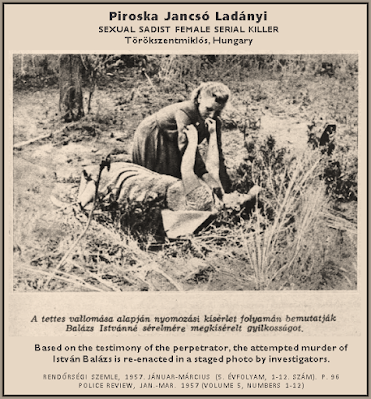 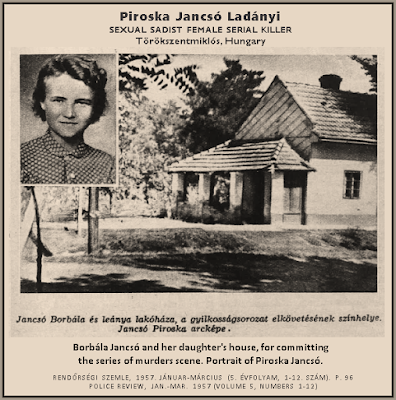 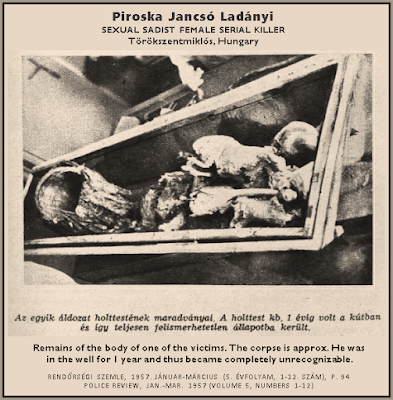 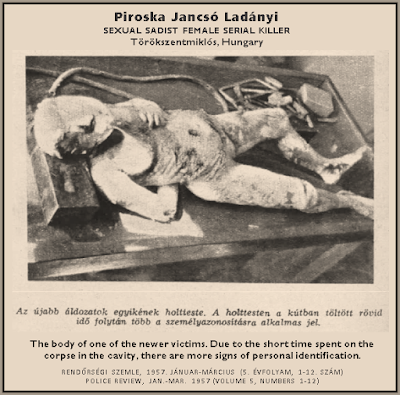 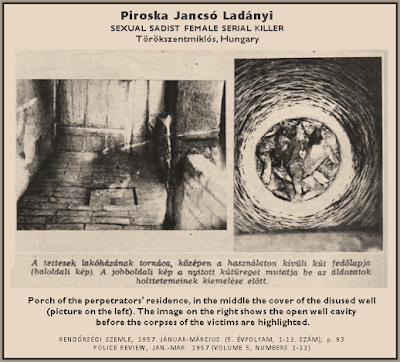 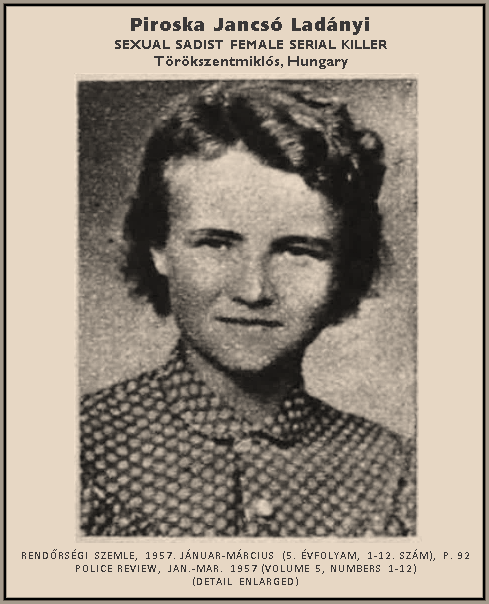 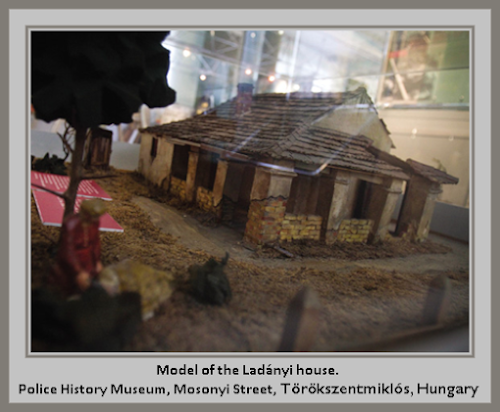 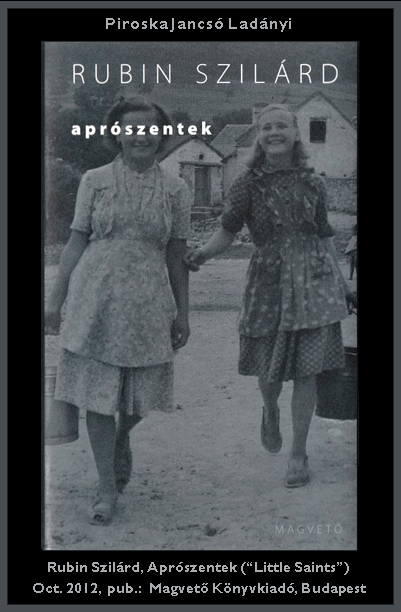