FULL TEXT (Article 1 of 3): St. Louis, Nov. 18. – If the charges against Midwife [Henrietta] Bamberger are true, she is one of the greatest criminals in the history of the world. Sworn statements accuse her of killing no less than 300 women and infants during her career in St. Louis.

The grand jury has returned one indictment for murder and four for manslaughter against her. her resort, on Chouteau avenue, was a veritable charnel house, it is said, where unfortunate girls met death and where infants were killed and then burned to destroy evidence of horrible crimes. Sworn statements in support of these charges have been made by Lizzie Rieger, Mary Haar And Katie Bleckinger, who reside now at 1829 South Tenth street,  but were formerly employed in Mrs. Bamberger’s house. As a result of this testimony, Mrs. Bamberger has been indicted for murder in the first degree on specific charges, and, besides, there is an indictment pending against her for manslaughter in the first degree and on three other charges.

The sworn statements of the three women charge that among some of Mrs. Bamberger’s victims was Louisa Miller, whose body was found in the Meramec river, near Luxembourg. The witnesses claim that Mrs. Baumberger packed this girl’s body in a trunk, paid an expressman $50 to haul it away from her house and with her own hands threw the trunk from the wagon into the Meramec river from a bridge.

Lizzie Bessert disappeared in September, 1897, but her body was never found. It is charged that it was buried in Mrs. Bainberger’s cellar.

A Bohemian woman, who lived near Ninth and Southard streets, is said to have been disposed of in the same manner.

Miss Colekamp (or Kulkamp), a girl of Mexico, Mo., died in March, 1894, and her death has never been explained.

A child of Mrs. Dugan, of Thirteenth street and Blair avenue, also died there.

It is also charged that bogus certificates were secured to bury some of the victims, that a fake doctor on South Broadway issued the certificates for $50 in each case. The authorities worked up the present case against Mrs. Baumberger as a result of the expose that 37-year-old Wilhelmena Spoeri, of 3432 Illinois avenue, met death in the resort. Mrs. Baumberger and John B. Texler, the young man in the case, were arrested at the same time, and their trial comes up next Wednesday. These facts developed in the Spoeri affair, enabled the authorities to dig up other alleged crimes. All of the cases specified above are sworn to by the three young women mentioned.

[“Wholesale Murderess – St. Louis Midwife Charged With an Awful List of Crimes. They May Aggregate Fully 300 – Children and Young Women Killed In Her Resort – And Were Buried Secretly.” The Pittsburg Press (Pa.), Nov. 19, 1899, p. 2] 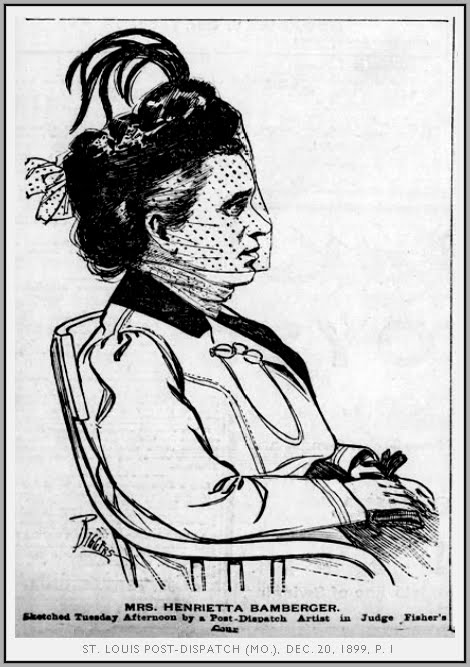 FULL TEXT (Article 2 of 3): Mrs. Henrietta Bamberger, midwife, of 919 Chouteau avenue, St. Louis, Mo., is a murderous fiend in woman’s form, a life-taking monster, slaying women and babies under the cloak of a ministering physician, if the evidence on which the grand jury indicted her recently be true. The testimony of four persons stamps her as a degenerate of the Holmes type, a murderess, brutal as Mrs. Nack, a creature without an atom of humanity in her heart.

She burned and drowned babes, and killed young women and disposed of their bodies. One she carted off in an express wagon and cast into a river.

Another she buried in the cellar or her own stable, a third she buried under a fictitious name from her own house. Eye-witnesses have testified to the crimes. They charge that as many as four babes were burned in one day and the total number of these crimes charged by the witnesses is almost incredible. The details of the specific killing alleged against Mrs. Bamberger are almost past belief. The woman stands indicted for four murders. One is a murder in the first degree; the others manslaughter. Information alleging other crimes is being investigated. The Chouteau avenue house will be thoroughly searched for further evidence. The cellar will be searched for traces of craves. Any number of crimes that may be alleged against the woman would not surprise the officials who have been engaged in bringing about her indictment. The crimes charged in the indictments were committed durlne the last five years. Mrs. Bambereer was in business in the same house many years before that.

It is not probable that her motnoas were ever different from the present.

The testimony on which the indictments were found was given by women formerly in Mrs. Bamberger’s employ as nurses or servants. This testimony is corroborated in part by material evidence, such as jewelry and clothing worn by the victims, and a photograph of one of them. The young women who are said to have died through Mrs. Bamberger’s instrumentality, dis appeared from their homes and none has been heard of by relatives since.

The discovery of the true character of Mrs. Bambereer’s business and tho crimes for which she now stands indicted was made by accident. An inkling the murders reached the office of Circuit Attorney Eggers six months ago. He made an investigation. The developments corroborated his first information. He applied to the police department for assistance. Detectives Lally and Harrington wore assigned.

Since that time Mr. Eggers, his assistant, Mr. Hodgdon and Detectives Lally and Harrington have worked in conjunction to unearth the crimes charged. They encountered many obstacles and overcame seemingly impassable barriers in the investigation.

The other day they had placed before the grand jury sufficient evidence to warrant indictments. Mrs. Bamberger was arrested by the detectives, who merely told her that the chief of police wanted to see her. Mrs. Bamberger was locked up in the holdover.

Subsequently Mr. Eggers swore out a bench warrant for her and the woman was placed in jail. The evidence is considered almost sufficient as it now stands, but the circuit attorney and the detectives are working to secure additional corroboration. It is charged that Mrs. Bamberger committed the crimes for hire. It was her business in perform operations and destroy evidences of this business. Women from far and near placed themselves under her care. Under the circumstances which surrounded the contracts between Mrs. Bamberger and her patients it is reasonable to suppose that the patients did not tell friends and relatives of the compacts. Consequently when one of the patients died, her relatives were not notified. She was considered missing. Mrs. Bamberger’s former nurses declare that as many as twenty patients were treated in one day. They say thousands of babes were burned. This latter statement is considered extravagant. Lizzie Rieger, the chief witness, declared that she saw five babies burned in one day. 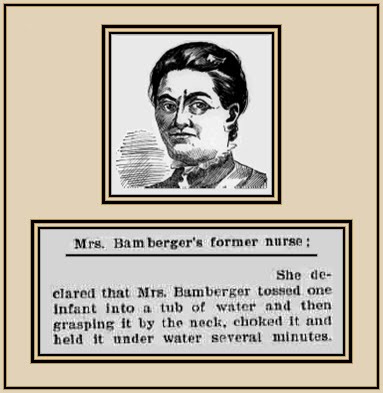 She said hundreds of infants that she did not see were destroyed. She declared that Mrs. Bamberger tossed one infant into a tub of water and then grasping it by the neck, choked it and held it under water several minutes. Lyda Bressert went, according to the story, to Mrs. Bamberger for treatment in September, 1897. Mrs. Bamberger locked her in one of the rooms to smother her cries, that they might not be heard from the street.

The nurse was at Lyda’s side while the latter died. The nurse declared that Mrs. Bamberger tied the girl’s arms across her breast with a towel and swore like a fiend because she said she would have to pay “him” another $50 to get rid of that one. Mary Hohlcamp of Mexico, Mo., the witnesses say, died from an operation some time early in November. 1896. The nurses declare that the girl asked Mrs. Bamberger to notify her parents at Mexico should she die, but that Mrs. Bamberger did nothing of the kind. Annie Zimmerman of Marine, Ill., became a patient at the Bamberger house in October, 1894. An operation was performed and the girl died some days later. The nurses declare that Mrs. Bamberger doubled up the corpse, placed it in a trunk and had it carried to the Merrimac river, they say.

Unlocked the trunk, liftef th body out alone, und heaved it over tho bridge railing into the water. Names of those known to the circuit attorney:

Infant (mother not positively known), strangled and drowned in 1895 and body burned in a range. Lyda Bressert, daughter of Mr. and Mrs. Henry Bressert of 2113 Madison street, in September, 1897, and buried in cellar under Mrs. Bamberger’s stable.

Mary or Ida Zimmerman of Marine, Ill., died in October, 1894, body thrown into the Merrimac river and buried by St. Louis county authorities as an unidentified suicide. 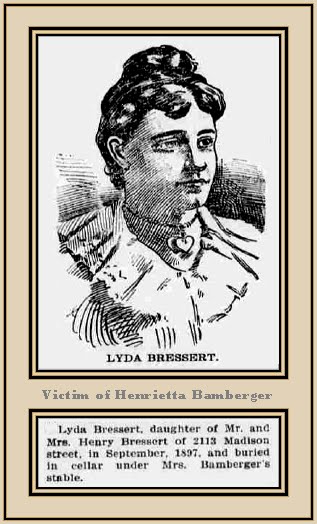 The house is a three-story brick structure, and stands back from the pavement and there is a side yard. The building is dingy on the outside. There is no front entrance. There is a small porch on the side of the house. The door hear leads into a hall at the foot of a stairway. Doors open from this hall into the parlor and into the second room. There are nine rooms in the house, three on each floor. The front room on the first floor was furnished as a parlor in plain style. The second room was the operating room.

It was in this hall that the baby was strangled and drowned. There was one witness in the kitchen and an other in the hall when the murderess committed the deed. A back stair
way runs up from this hall.

The party of officials ascended the front stairway, preceded by Kinzle.

They had inquired of the latter the location of his mother’s instruments and he had told them that he knew nothing about his mother’s possessions. Mrs. Bamberger declares that she is innocent. She asserts that the evidence against her is false, and that it was inspired by motives of revenge.

[“Her Fiendish Crimes - Terrible Criminal Record Of  A Female Butcher. - Killed Little Innocents by the Score to Hide Other Deeds or Lesser Evil - Henrietta Bamberger of St. Louis Believed to Be a Monstrosity.” Kansas Agitator (Garnet, Ks.), Dec. 22, 1899, p. 2]

FULL TEXT (Article 3 of 3): St. Louis, Mo., March 16. – The jury in the case of Mrs. Henrietta Bamberger, the midwife, today returned a verdict of guilty of the charge of manslaughter and fixed her punishment at five years in the penitentiary. It was charged that she caused the death of Wilhelmina Spechir [or, Spoeri], a girl who came to Mrs. Bamberger for relief. 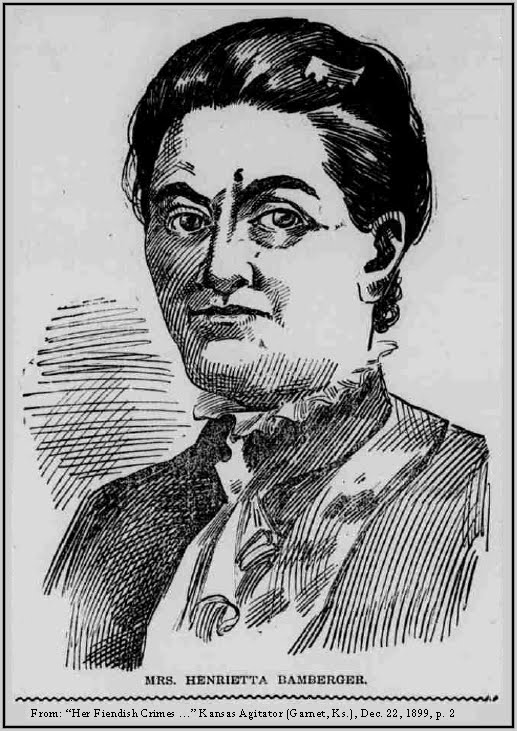 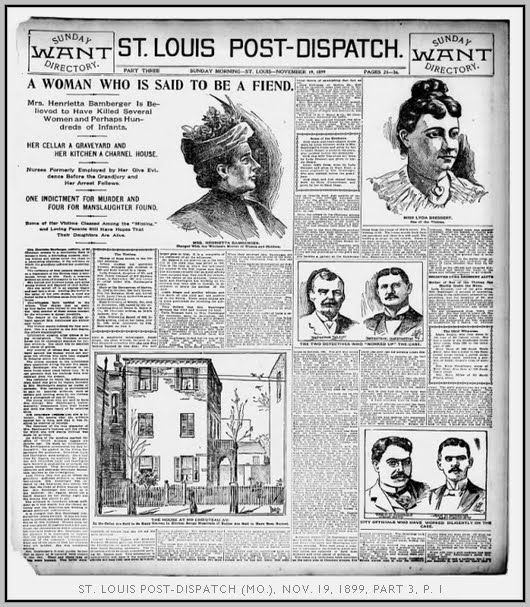 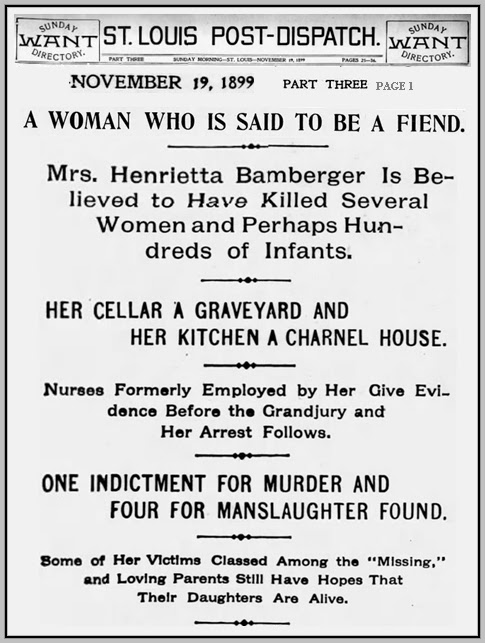 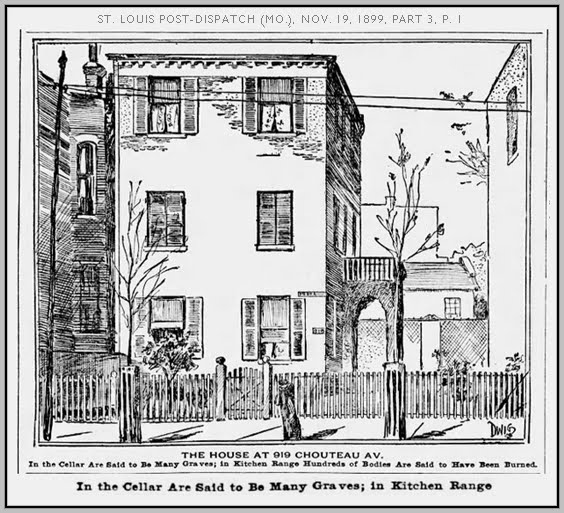 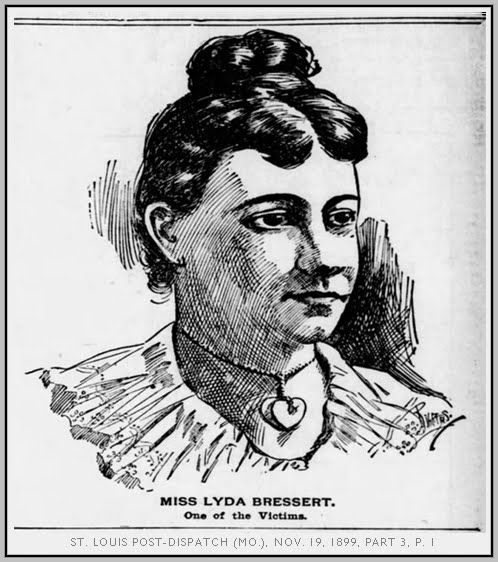 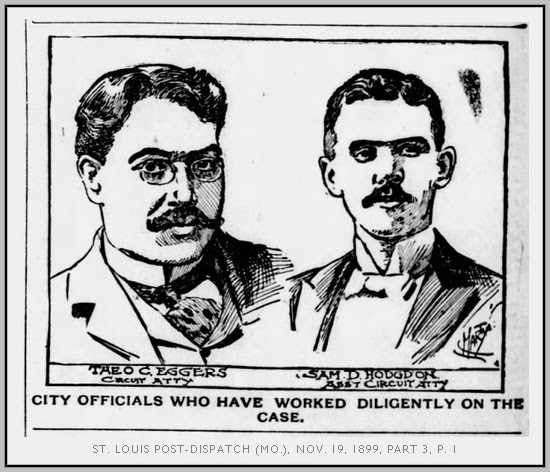 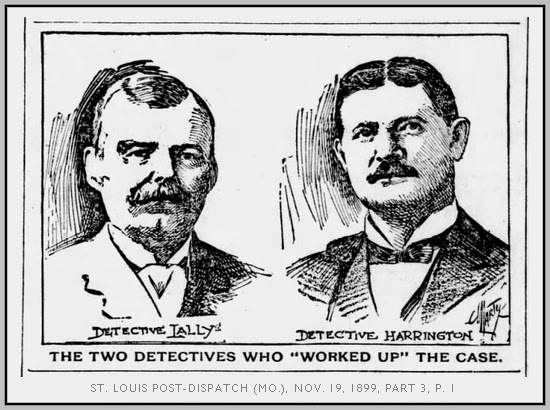 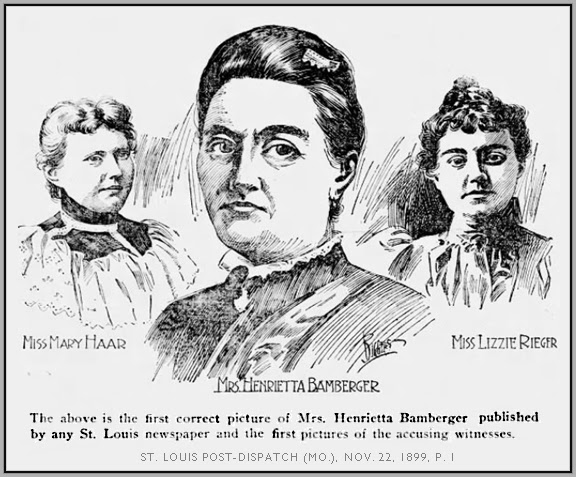 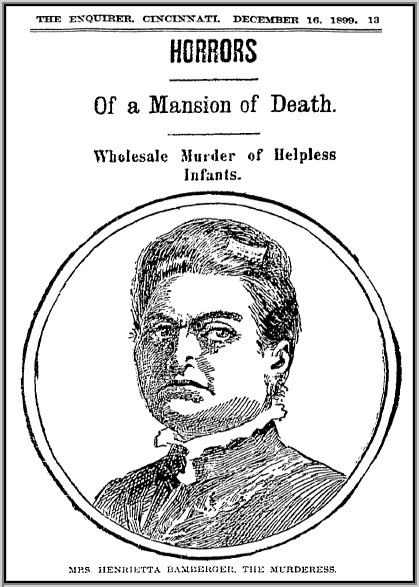 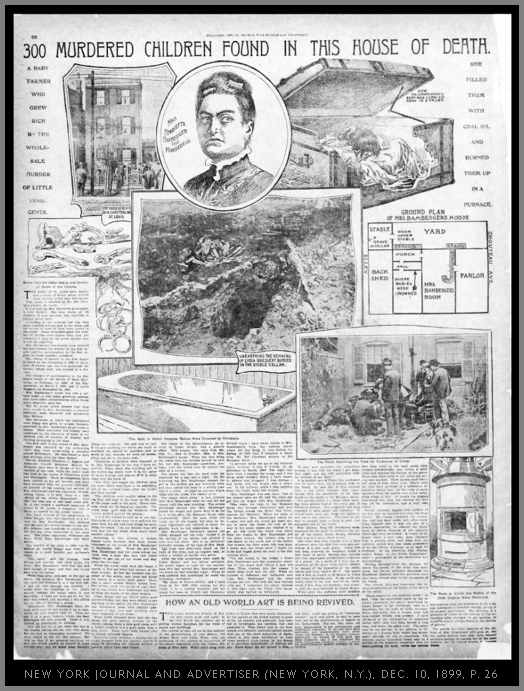 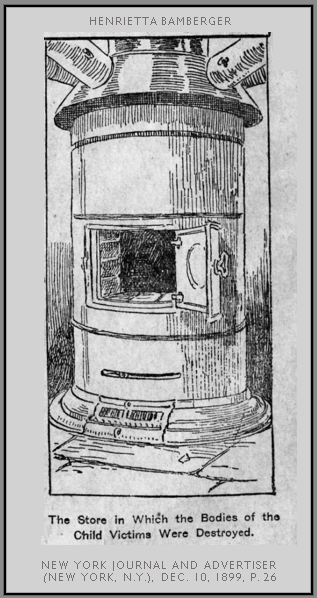 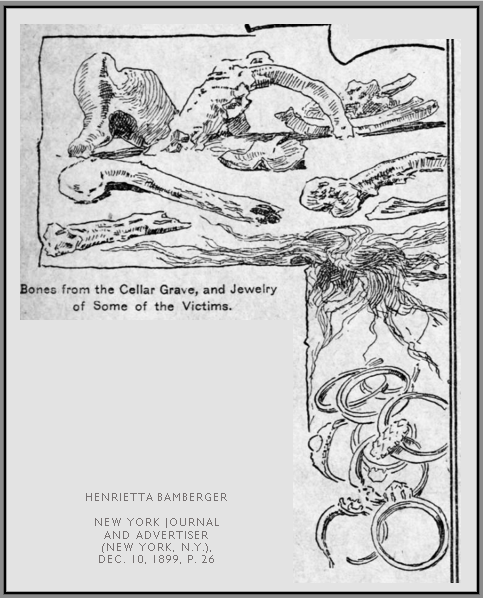 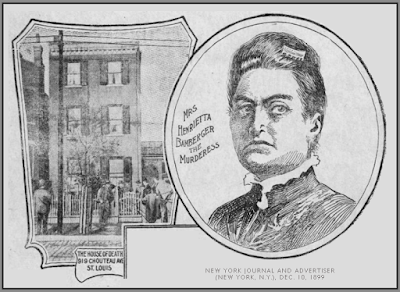 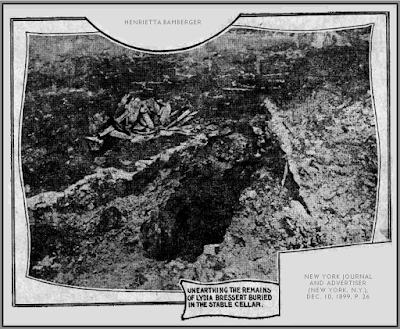 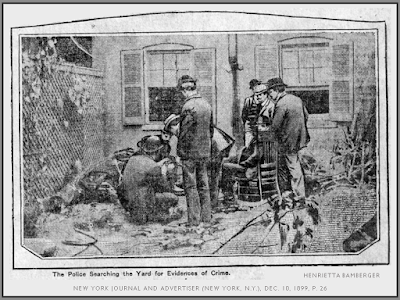