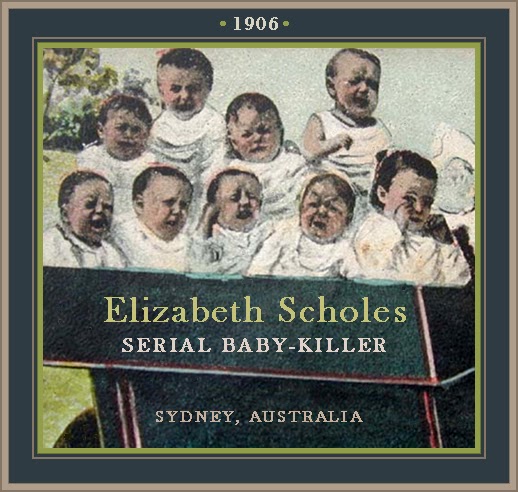 FULL TEXT: Some remarkable evidence was given to-day at the Paddington Police Court, in a case in which three women – Elizabeth Scholes, 41 years of age, married, Grace Saru, 41, married and Eliza Ann Kennedy, 37, married, were charged separately with having received into their care Ruth Liggins, three-weeks old to adopt from the parents’ custody, without a written order from a justice of the peace specifying the terms upon which the child might be received. The accused were also charged with having received £8 in connection with the adoption of the child.

Senior-Constable Davoren said the he went to the house in Newtown on September 4, where he saw the accused, Kennedy, and Annie May Liggins (the mother of child). Liggins told the witness that Kennedy was the woman who adopted her child and that she gave her £8. Liggins added that she thought the baby was going to a woman at Moss Vale. Kennedy admitted having taken the baby and eight sovereigns.  When at the Paddington police-station Kennedy said she gave the baby to the accused, Scholes, as well as the £8.  Scholes answered that she received only £2 and the baby. Later on Scholes said, she gave the baby to the accused, Sarau was first seen she denied receiving the baby or the money, but at a later interview Sarau admitted the truth of Scholes’ statement, and said she knew she had done wrong in obliging Kennedy by taking the baby.

Evidence was given that the birth of the child had not been registered. Sarau was the only one of the accused who chose to give evidence. She said she followed the occupation of a nurse, and on August 18 she received a telegram from Mrs. Kennedy, and sent Scholes in answer to the message. Scholes returned with the baby, and told her that Kennedy wanted it weaned, for which she was paid £2. The child was successfully weaned. She did not take the child for the purpose of adoption. She had kept the baby from August l8 to September 4, but did not register it.

The three accused were committed for trial.

Scholes was paid £5 to care for a baby, but she passed it over to another woman, with a promise to pay 5s per week. Only one payment was made.

Scholes made a trade of receiving babies on the plea that she was going to adopt them. She pleaded guilty to abandoning two other children.

Kennedy got £8 with one child, and passed it on to another woman.

The police stated that six babies were found at Scholes’s residence from August 2 to September 1. Eight abandoned children were found in the streets, and four died.

The judge said Scholes’s case was a serious one. Death had resulted in two cases for which she was responsible, and he sentenced her to 18 months' imprisonment. The other two accused were bound over to come up for sentence when called upon.