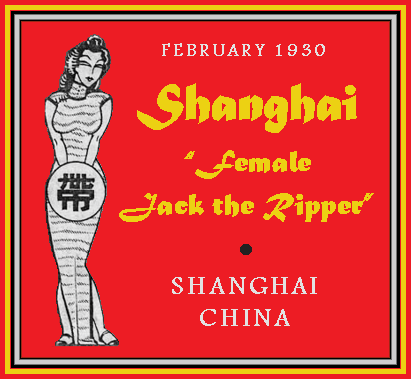 FULL TEXT (Article 1 of 3): Shanghai, Feb. 10. – The activities of a female "Jack the Ripper" are baffling the police in the foreign settlement at Shanghai. Two child murders have been reported in the past two days. On Saturday afternoon a Japanese girl seven months old was stabbed in the neck and strangled, and last night the water police picked up a Chinese girl in the harbour, who had been strangled in similar manner.

The murder of the Japanese baby occurred in an upstairs room at its home, and the police are searching for a pretty Chinese girl with bobbed-hair, believed to be a cabaret dancer, who was seen by the mother of the murdered child to leave the premises shortly after the tragedy. The absence of any apparent motive for the crimes intensifies the mystery surrounding them. The entire staff of the Japanese Consulates is assisting the, municipal police in their endeavour to trace the murderess.

The father of the first victim is a cashier at the Yokohama Specie Bank at Kajiwara.

FULL TEXT (Article 2 of 3): Shanghai, Tuesday. – The Japanese, consular police, in conjunction with the International settlement police, have arrested the supposedly female “Jack the Ripper,” in connection with two child murders, which have been committed within two days.

She is a Japanese dancing girl, employed at a local cabaret. It is believed that she is insane.

On Saturday, afternoon a Japanese girl, seven months old was stabbed in the neck and strangled.

On Sunday night, the water police picked up a Chinese girl in the harbour strangled in a similar manner.

The Japanese crime occurred in the child's home upstairs. The police began the search for a pretty, bobbed-haired Japanese girl, believed to be a cabaret dancer. She was seen by the mother of the murdered child when leaving the premises.

The absence of an apparent motive intensified the mystery. The entire force of the Japanese consular police assisted the municipal police in tracking the murderer.

FULL TEXT (Article 3 of 3): Shanghai, February 11. – The Japanese consular police, in conjunction with the international settlement detectives, have arrested the supposed female “Jack the Ripper.”

A Japanese dancing girl, employed in a local cabaret, confessed to the murders. She is believed to be insane. Two young children were murdered in two days. 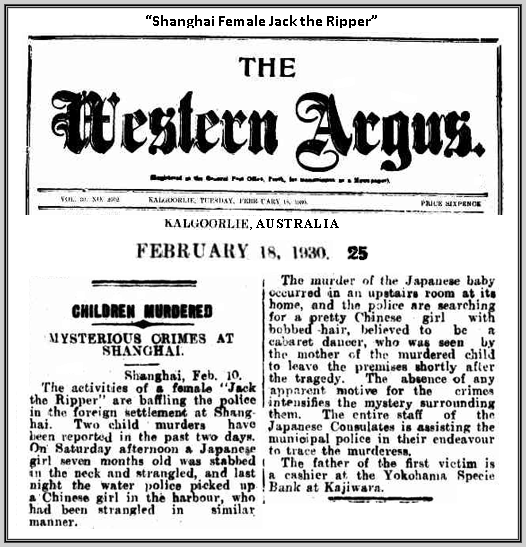 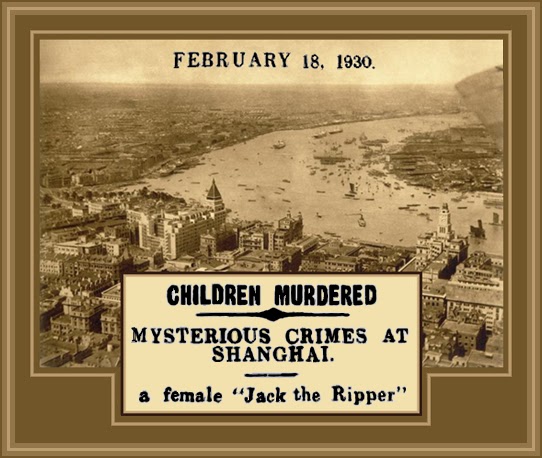