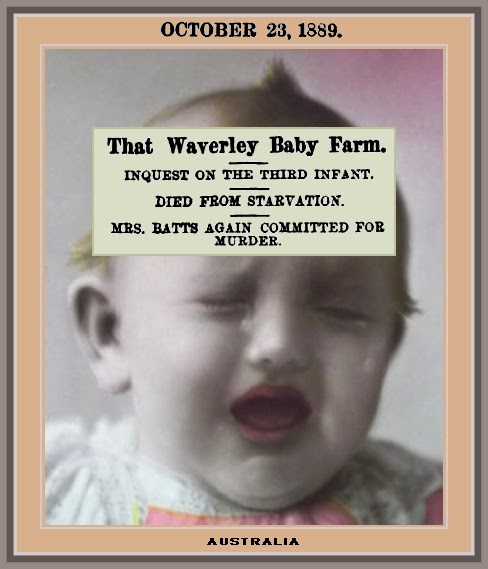 FULL TEXT (Article 1 of 2): At Waverley. yesterday the inquest on the body of the infant, Elizabeth Cohen, who died on 10th instant, at the residence of Mrs. Ellen Batts, No. 10, Vernon-street, Waverley, having been in that person’s care, was resumed before the City Coroner and a jury of twelve.

Mrs. Batts, who is now awaiting trial, charged with the murder of two other infants, was before the court.

William Mogford Hamlett, Government Analyst, stated that he subjected to chemical analysis the stomach and viscera of the deceased, which had been placed in a sealed jar. The stomach was almost empty, only a very small quantity of liquid being present. The membrane was very much blackened and discolored. The liquid was examined and found to contain traces of lime and carbonate of soda. The whole of the viscera was divided and analysed, but no metallic or other irritant poisons could be discovered. Neither were there any alkaloids or vegetable poisons; but there were found traces of cadavaic alkaloids.

By the jury : It was not usual to find lime and carbonate of soda in the stomach of infants. The carbonate of soda might possibly have endangered the life of the child by preventing digestion. By Mrs. Batts : The lime may have been given to the child with water. By the jury : It was possible sometimes to trace the presence of laudanum in the system; but owing to the rapid absorption of the drug it was frequently impossible.

Dr. F. M. Smith, of Waverley, said that, having heard the evidence of Mr. Hamlett, he was of opinion that death was due to improper and injudicious feeding, which was tantamount to starvation.

Senior-Constable Bobert Stove, stationed at Waverley, testified to having handed the viscera of the deceased, which was in a sealed jar, to the Government analyst.

Emily Stephens deposed that up to the 10th instant she was house-keeping for the late Benjamin Hyam Cohen, at No. 56, Newtown-road. She was present at the birth of the deceased infant, Elizabeth Cohen, on or about August 11. The mother of the child, and the late Mr. Cohen requested witness to take the child to Mrs. Batts’s place. Witness accordingly took the baby there when it was about nine hours’ old. About two months before the child was born witness and Miss Cohen (the mother) went to Mrs. Batts and made arrangements about taking the infant. Did not then hear anything said about payment. On the Wednesday after witness took the child to Mrs. Batts the late Mr. Cohen authorised her (witness) to again see Mrs. Batts, and ask what she would charge for adopting the baby, and added “Get her to do it as reasonable as possible — say about £7.” Told Mr. Cohen that Mrs. Batts would not take less than £9 10s, and the following day that amount was accordingly paid her, for which witness was given a receipt. When witness saw the child again it was sickly and was suffering from a cold.

Ellen Batts, after being cautioned in the usual way by the Coroner, deposed that when she received the child it was small and weak. Fed her on cow’s milk and limewater. Sometimes fed her with a spoon. Never gave the deceased any carbonate of soda. Cleaned the feeding-bottles with washing soda and water. Witness always prepared the food, and gave it to the babies her self. Deceased soon contracted jaundice. Used about three and a-half bottles of cod liver oil in all, but she did not get any better. Deceased was then seized with the whooping cough, and witness gave her syrup of squills. Deceased, like the other children, never could keep any food on its stomach. Witness had sixteen years’ knowledge of the rearing of children. Believed deceased to have died of whooping cough. Witness found the clothing for deceased, but the late Mr. Cohen paid the funeral expenses. For a whole month witness never retired to bed, in consequence of having to attend to the children who were suffering from whooping cough. Never allowed the babies to sleep together. Witness received £9 10s for adopting the deceased.

By the jury: She did not send for a doctor, because the child did not seem to fall away, only when it was seized with the whooping cough. Three babies were taken away from her charge. During the past eight months she had adopted four children, all of whom were dead. Within the past eleven months twelve children had died in her house. The Coroner in summing up said that according to the evidence of the mother and Mrs. Stephens, the child was strong and healthy when born, but this was denied by Mrs. Batts. The evidence of the doctors prove that the child was healthy; but that it had been deprived of food and proper nourishment, and they could not in any other way account for death. Therefore the jury could scarcely come to the conclusion that death arose from natural causes. The child had been placed in Mrs. Batts’s charge, and she was responsible for its care. The jury would have to consider whether this child’s death was due to wilful starvation or simple negligence— one was murder and the other manslaughter.

The jury then retired to consider their verdict, and after half an hour’s deliberation, returned a verdict of wilful murder against the woman Ellen Batts.

Mrs. Batts was then formally committed to take her trial.

FULL TEXT (Article 2 of 2): Ellen Batts, the keeper of a baby farm at Woollahra, has been again acquitted on a charge of murdering another of the infants who died while in her keeping.