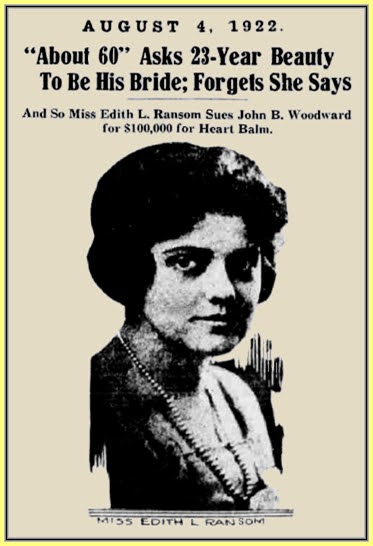 FULL TEXT: Miss Edith L. Ransom, a twenty-three-year-old Richmond, Va., beauty filed papers in a suit in Supreme Court for alleged breach of promise against John B. Woodward, an executive and part owner of a Chicago newspaper. He is a widower, about sixty years old, and while in New York lives at the Dearborn Apartments in West 55th Street, Miss Ransom lives nearby in the Hotel. No. 147 West 55th Street.

In her complaint filed by her counsel, Thomas J. Stapleton of No 305 Broadway, Miss Ransom alleges that Woodward asked her to be his wife while they were a dinner in the Hotel Majestic, on June 20, 1920, and that he renewed this promise in October of the same year while the were at a sanitarium in Summit, N. J. Now, she avers, that recently he withdrew his promises to marry and $100,000 damages.

In a letter to her lawyer, included in the complaint, Miss Ransom writes:

“After several quarrels Mr. Woodward told me that he did not intend to marry me as he had discovered that I had a very jealous nature, and that I got on his nerves at times when I became hysterical after his quarreling with me.

“Due to the disappointment and heartache and worry over the compromising position in which I have been placed I fell seriously ill last summer in the Edgewater Beach Hotel and can secure proof from people in Chicago that Mr. Woodward introduced me to his friends and paid all my expenses while in Chicago at his fiancee.”

Among various letters submitted by tin plaintiff in her complaint is on the letterhead of a Chicago newspaper, saying in part:

“Dear Edith: You have great versatility in letter writing. In almost every letter you write you show it. Sunday you pictured me as a your big wonderful man. Tuesday I was a shrimp, not it to continue as your devoted pal, that on my return to New York  I was not to speak to you Wednesday I was to prepare for the Wedding March and on Thursday I was a cold-hearted villain who had forsaken his Princess and was rushing widows and vamps. Your letters are always interesting and I enjoy them immensely.”

Affidavits are submitted to Mrs. Margaret Ott, superintendent, and nurse, at the Esther [?] Erbach Dr. Reinie’s sanitarium, Summitt, N. J., declaring that Woodward and Miss Ransom spent ten days in adjoining rooms of the sanitarium and that she held Miss Ransom out as his fiancée and it was understood they were to be married next December.”

Miss Ransom is an orphan, her parents having died when she was an infant. She was reared in the .Masonic Home in Richmond, Va. During the war she was secretary to George Creel, Director of the Bureau of Public Information. It was while she was Mr. Creel’s secretary that she first met Mr. Woodward. 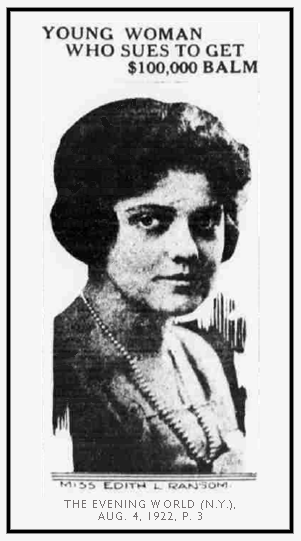