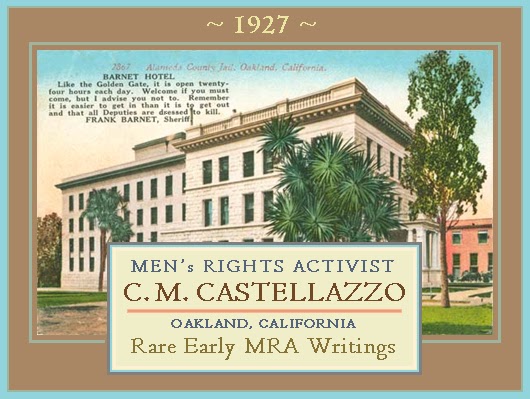 FULL TEXT: Alameda county’s “alimony martyr,” Emil R. Whittenberg, is willing to go to work and pay alimony in order to get out of jail, but he was still a cell inmate today, his fourteenth day of imprisonment. No longer is he a militant striker openly, whatever his private convictions on alimony, he now craves the freedom of the wide open spaces.

But Wittenberg’s freedom largely depends upon the consent of his wife to arrangements by which he may get out of jail and work for her support. Her attitude today remained constant, if he will pay, he may go free, but no pay, no freedom.

Even the moral support of Sam W. Reid, famous alimony-martyr of Glenn county, California, failed to hold Wittenberg against the craving for freedom.

Wittenberg’s plight has attracted another sympathizer, C. M. Castellazzo, box 1533 Redwood road, Castellazzo wants to enlist the men in a general campaign against the "women’s clubs.” “It will take manhood to put it over,” he wrote Wittenberg.

I read with interest that, you are forming an Anti-Alimony club. I understand that the club will urge special legislation for alimony payers. Let me inform you that it will take move than mere urging to put it over.

You have the combined forces of women’s clubs against you. You note that the women’s clubs which claim to have high ideals and an eagerness for righteousness are not helping you in your predicament. It will take manhood to put it over. It requires initiative by taking what is right, not mere urging.

All men worthy of the name men, who are not mentally degenerate, such as those who figure that the women are always right – are eligible to the club. Since you state that you are without funds, I am enclosing a 2-cent stamp, should you wish to make a reply. Wishing you the best of luck, I am,
Very truly yours, C. M. CASTELLAZZO...

Signing himself “Another Alimony Dodger,” still another supporter came to Wittenberg’s camp today. He said:

“Dear Sir:
“It is with interest I read of your case, and I heartily sympathize with your case. America is today run by women. When a man is so foolish as to marry one of them, he is done for, so long as she cares to hang on to him.

“About the only relief that the man has is that some other bonehead will come along and take friend wife off his hands. Every man of experience knows that most wives will not give up one meal ticket until she has the next in sight.

“I am wondering if there isn’t a better way out of your difficulties than the one you have chosen. Isn’t it possible for you to pay tip and leave California? It seems a shame that you should have to waste your time and lose your freedom over such a trifling matter.

“You are at least lucky in being divorced. Some of us have not been so fortunate. I personally spent about four hours in jail, and three weeks later, when I got things in shape, I took a 2000-mile trip for my health. I found my health so much better that I have never gone hack.

“You will only afford your alimony-grabber satisfaction by remaining in jail when you might be working to your own advantage if you were free and out of California.

“More power to you! I hope you never pay, but that, you will work out some scheme to beat the alimony graft.

“American men are today the laughing stock of the rest of the world, and of their more intelligent fellow Americans – and they deserve to be.

“Never in the history of the human race have men fallen into such a preposterous situation as that of most American husbands. The humor of the situation lies in the fact unil they have built the net in which they are now floundering. One by one they have passed stupid and asinine laws till today a man has as much right to say what shall be done with his properly, his children, or even his person, as a jack ass.

“Well, I must close. Here’s a handshake for you and all the fellow alimony dodgers. Perhaps in time other slaves will gee the light and stand out against this asinine and tyrannous graft. Until that time it will be each of us for himself and the devil take the hindmost.”