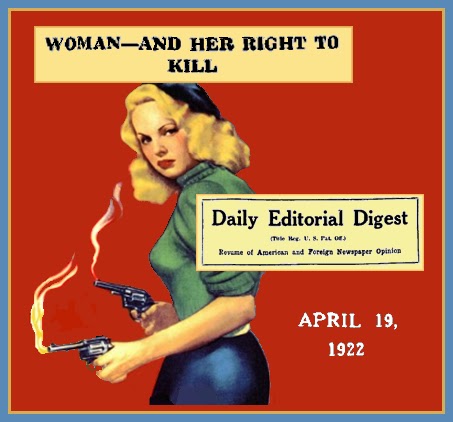 FULL TEXT: Whether it is not wasting the money of the taxpayers trying women for murder in cases where the so-called unwritten law can be evoked is the subject of comment throughout the country. The discussion centers upon the recent acquittal of Miss Olivia Stone, the Cincinnati nurse, who shot a former corporation counsel of that city because she alleged he had failed to keep his promise to marry her.

“If women who commit crimes of passion are always to go free,” suggests the NEW YORK WORLD, “why bother to try them? Why not provide an immunity procedure, based on the unwritten law and including recognition of the tender susceptibilities of sympathetic jurors, whereby the process of exculpation may be shortened and cheapened? The plan would do away with considerable hypocrisy and humbug in the name of justice,” which leads the Syracuse, N. Y. HERALD, to remark:—”Why not? Why should the money of taxpayers be wasted in the prosecution of women who kill their comrades in illicit relationship?

If the law making deliberate murder a capital offense is to be suspended in the discretion of juries, when the assassin is a woman, it would be better for the cause of justice, and it would make law more respectable, specifically to exempt from any punishment women who murder their paramours. Such travesties of justice as this help to give fresh impetus to the crime wave.”

It is pointed out by the BROOKLYN EAGLE that “we no longer stage a purely judicial proceeding for the trial of a woman accused of murdering a man from whom she has suffered real or fancied wrong. Instead we stage a melodrama, with the defendant as the persecuted heroine and the dead men as the villain.” The EAGLE points out that while the judge may try to hold the scales of justice even, acquittal is certain, and adds:—”Perhaps one of the earmarks of our civilization is our frank recognition of the fact that law can be made to mean one thing for a man and an entirely different thing for a woman,” Which brings from the Worcester TELEGRAM the suggestion that “juries of normally hardboiled males continue to view crimes through a glamor of romance, chivalry and sympathy, set the seal of their approval upon homicidal endeavor and bid the law, instead of the defendant, go hang,” while the Columbus, Ohio, STATE JOURNAL, sarcastically remarks that “the acquittal is in strict accordance with the exact terms of the unwritten law and we trust will give added impetus to the movement among our girls in their pursuit of happiness to arrange to be deceived and then shoot.” 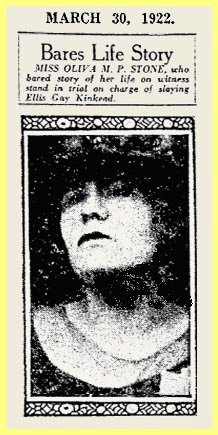 The fact that the verdict, like all of its kind was, after all, “against society,” is pointed out by the Pittsburgh, Pa., GAZETTE TIMES, which feels convinced that “Americans do not believe in the unwritten law, as commonly defined; they do not believe in private vengeance, the forgiveness of which by a jury amounts to usurpation of authority by twelve men whose sole duty is to determine the facts of a case. Justice for society demands that the criminal courts function legitimately.” And in this specific case, the Danville, Va., REGISTER, points nut. there was no evidence only by Miss Stone herself that she had been wronged by Kinkead and adds: “even if he had deceived the woman as she claims, does that justify her in shooting him down?” And acquittals of this character naturally will have the effect of encouraging women to slay the Lafayette, Ind., JOURNAL-COURIER believes, and “thus is murder in a “love nest” given a place among the favorite indoor “ports of the day.”

The jurors may have had some justification for their verdict in the opinion of the Richmond, Va., TIMES DISPATCH, which points out that “the evidence in this case had revealed to them a defenseless young woman, her betrayal and subsequent relentless hounding by a man who led a Jekyll-Hyde existence, her humiliation and desperation—then the fatal meeting.

That was the picture impressed upon the minds of the jurors, and, right or wrong, the verdict they gave is the verdict we may expect to continue hearing in eases of this sort.”

Which prompts the Savannah, Ga., NEWS to suggest that in view of the imposition of a seven and a half years imprisonment on Gussia Human in a New York court for perjury at her lover’s trial for murder and the acquittal of Miss Stone “the truth may be that the greater the crime the less likelihood of punishing, the woman in the case.” And the Richmond, Ind., ITEM, feels convinced that “it has got to a point where almost any woman can be sure of acquittal for killing a man. All she has to do is to throw hysterics and shed tears in court and her conviction is seemingly impossible.” 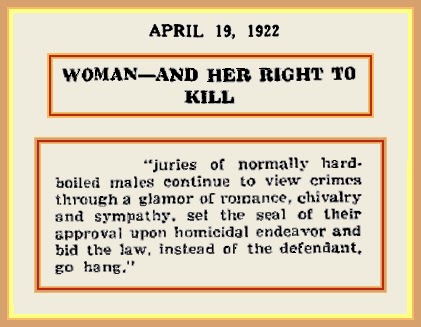 The Port Huron, Mich., TIMES HERALD, feel that “one may have unlimited sympathy for the wife who kills the woman who steals) her husband, and may find plenty of excuses for the man who shoots his friend for violating the honor of his wife, but (here is considerable question whether it is a wise method of administering justice, although too often the punishment may be well deserved.”

The economic phase of the situation furnishes a strong appeal to the editor of the Worcester, Mass., GAZETTE, who sarcastically declares that “taxes are high; government is expensive, let’s save hundreds of dollars and much nerve force. When a lady pulls her trusty gat and perforates her sweetheart don’t arrest her. Save time and money and wear and tear. Besides, this plan would enable the killer to get on the stage or in the movies within a day or two after the killing.” The very fact that there are so few, by comparison, killings by women leads the Cleveland NEWS to call attention to the fact that “it may be said the nature of American women is demonstrated as being generally and notably kind, patient and peaceable by the fact that murderesses are not more numerous in a country where it always is an open season for man hunting by women.” 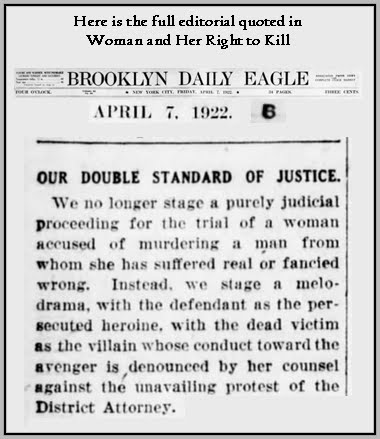 OUR DOUBLE STANDARD OF JUSTICE.

We no longer stage a purely judicial proceeding for the trial of a woman accused of murdering a man from whom she has suffered real or fancied wrong. Instead, we stage a melodrama, with the defendant as the persecuted heroine, with the dead victim as the villain whose conduct toward the avenger is denounced by her counsel against the unavailing protest of the District Attorney. The Judge tries to hold the scales of justice to an even balance, but the verdict of acquittal is a foregone conclusion. The curtain falls to the happy ending amid the cheers and plaudits of the audience. Injured womanhood is once more triumphant. Jurors are congratulated and sometimes kissed. Justice may not have been done, but the application of the unwritten law has been splendidly vindicated.

It matters nothing whether killing in these cases is deliberately planned and carefully carried out. A wife, separated from her husband, may pack a gun in her handbag, drive miles to the home of the gentleman, shoot him full of holes before he has a chance to defend himself and receive from a jury of gallant American gentlemen a pass to freedom because her lawyer has been able to show that the man she slew had failed to observe all the proprieties of married life. A woman may lie in wait for a man with whom she has had an intrigue and who has left her for another woman, pump him full of lead, express satisfaction that the deed was well done, and another jury of gallant American males will say: “Your wrongs unsettled your brain. He was a rascal. With kindest regards we pronounce you not guilty.”

More than twenty years ago in this State a woman was convicted of first degree murder, but she had killed another woman. She was put to death. She was elderly, homely, friendless and no emotional or romantic appeal was possible in her case. Later, another woman, also homely and friendless, though not elderly, killed the man who had not only wronged her, but spat upon and spurned her when she asked for marriage. By some curious perversion of sympathy this woman also was convicted of murder in the first degree and spent, weary months in the shadow of the electric chair, until a merciful Governor, moved, it may have been, by the inequality of justice in other murder cases involving omen, rescued her from death. But with these exceptions. Jurors in this and other States have behaved like gentlemen in dealing with ladies accused of homicide.

“This is not a court of justice,” once remarked a judge in this State, replying to counsel, “this is a court of law!” Courts become neither courts of law nor courts of justice when juries set up a standard of responsibility for women different from that maintained for men. It is true that once in a great while a man who gluts his desire for vengeance by slaying another man, and who has plenty of money to hire high-priced counsel and equally high-priced alienists, gets away with murder on the plea of brain-storms or other mental eruptions. But such cases are rare. Juries of men make short work of other men who kill in cold blood. Emotion, sympathy, sentiment are reserved for the treatment of cases in which women figure as defendant and which involve what the French call “the crime of passion.” We admit that we are a highly civilized nation. Perhaps one of the earmarks of our civilization is our frank recognition of the fact that law can be made to mean one thing for a man and something entirely different for a woman, that the inhibition of individual vengeance for private wrong must always be interpreted in terms of sex.