Lena M. Lillie, Gambled Away Too Much Money & Was “Forced” to Murder Husband to Raise Cash - 1903 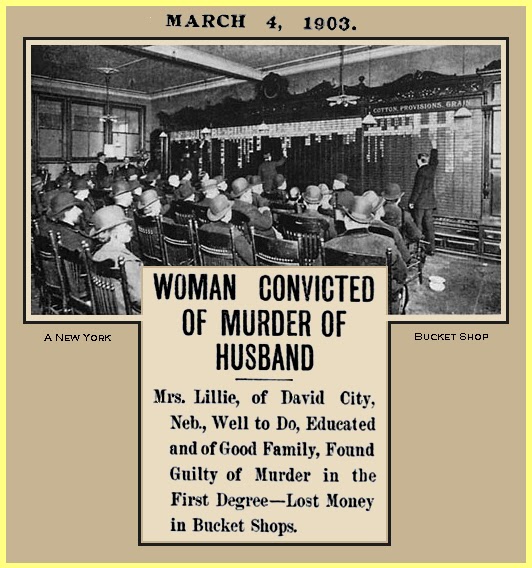 There is nothing unusual about wives cold-bloodedly murdering husbands for money to fund her gambling, her drinking, her extracurricular sexual escapades – or out of sheer uncontrollable rage.

FULL TEXT: David City, Neb, March 3.—The jury in the Lillie murder case today brought in a verdict of guilty and fixed the punishment at imprisonment for life.

Mrs. Lena M. Lillie, well-to-do, educated and member of a prominent family, was accused of the murder of her husband, Harvey Lillie, early in the morning of Oct. 14 last, by shooting, as he lay sleeping in his bed. Mrs. Lillie claimed that her husband had been shot by a burglar who had robbed the house of $3,000 in cash. Harvey Lillie died within a few hours, without regaining consciousness. He was a popular business man, without enemies, and his domestic affairs were supposed to be pleasant.

It was testified at the trial that Mrs. Lillie was a steady patron of bucket shops [illegal stock market middleman operations; essentially gambling halls] and had lost much money. It was also shown that her husband's life insurance in her favor was $8,000. An application for a new trial will be made, and if overruled an appeal will be taken to the United States supreme court.