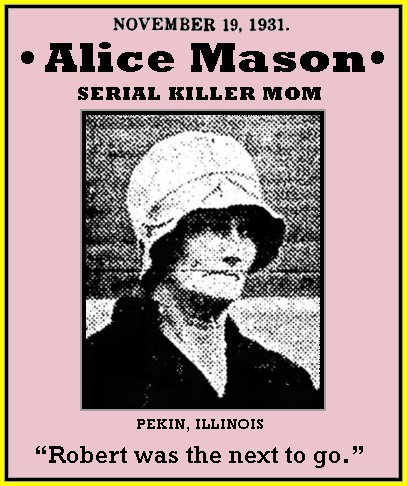 The coroner said he also planned to investigate the death, a year ago, of Mrs. Mason’s husband, who is buried in Devalan, and an illness, a month ago, of her son, Harry, 15.

A coroner’s jury investigating the death of the 12-year-old daughter recommended that Mrs. Mason be held to the grand jury without bail.

FULL TEXT (Article 2 of 5): Pekin, Ill., Nov. 19 – A middle-aged widow who told authorities she “had a hand” in poisoning her husband and daughter with arsenic to obtain insurance money was questioned further today in an effort to reveal full details of the death plot.

Mrs. Alice Mason’s confession of the poisoning at their home at Delavan, Ill., nearby, of her husband a year ago and her daughter, Mildred, 12, last August, named three accomplices, Sheriff James J. Crosby announced.

He said the alleged accomplices would be questioned but that he had little faith in the woman’s statement.

“Mrs. Mason has made three confessions,” the sheriff said, “since being taken into custody. In each case those on who she has thrown the blame have easily exonerated themselves when questioned.”

The woman revealed she had planned to poison her son, Robert, 22.

State’s attorney Louis Dunkelberg, who said she signed a statement last night admitting the slayings, announced the cause [sic] would be presented to the grand jury today.

Dunkelberg quoted Mrs. Mason as charging the poison was given her by Dr. M. B. Barringer. He expressed doubt, however, if the physician took a part in the alleged crime.

The announcement of Mrs. Mason’s confession was made several hours after the coroner’s jury ordered her held to the grand jury on a charge of murdering her daughter.

FULL TEXT (Article 4 of 5): Pekin, Ill., Nov. 20 – The investigation into the poisoning of Mrs. Alice Mason’s husband and daughter turned today to Clinton Armstrong, her neighbor at Delavan, Ill.

Although Mrs. Moran, who confessed she administered the poison which was fatal to her husband, John, a year ago, and her daughter, Mildred, 12, last August, insisted on keeping Armstrong “out of this,” authorities took him in “technical custody,” late yesterday.

“But I haven’t talked to Armstrong yet,” said State’s Attorney Louis P. Denkelberg, who likewise refused to explain why the gray haired, heavy set neighbor of Mrs. Mason was held.

The case against the widow, charging that she poisoned her husband and daughter to collect $1,000 insurance on each, will not be presented to the grand jury until next Wendesday, Dunkelberg said.

Dr. B. M. Barringer, who was accused by Mrs. Mason of aiding her in the poisoning, was released under $10,000 bond late yesterday. Dunkleberg indicated he was still doubtful whether the woman’s charges were true.

“He generally brought her to the bank in his automobile,” said McCormick, “and would stay in his car parked at the curb while she came inside and withdrew three or four dollars. Then they would motor away.”

McCormick, Mayor T. U. Rademaker, and many other townspeople of Emden came to the support of Dr. Barringer yesterday.

The doctor asserted the woman’s charges that he had furnished her with capsules of poison to feed her husband and daughter were unfounded. He said he attended Mason and accompanied him to a Peoria clinic where Dr. W. W. Cutter prescribed small doses of the drug which, taken greater quantities, caused Mason’s death. The treatments, Barringer said, were for a tubercular ailment.

She was sentenced to spend the remainder of her life in the woman’s reformatory at Dwight. No attempt was made to prosecute her on a charge of killing her husband, who died several years ago.

Mrs. Mason was said by authorities to have confessed killing her daughter in order to collect a $1,000 insurance policy on the girl’s life. Neighbors caused the mother’s arrest on last Nov. 17, nearly five months after Mildred’s death. 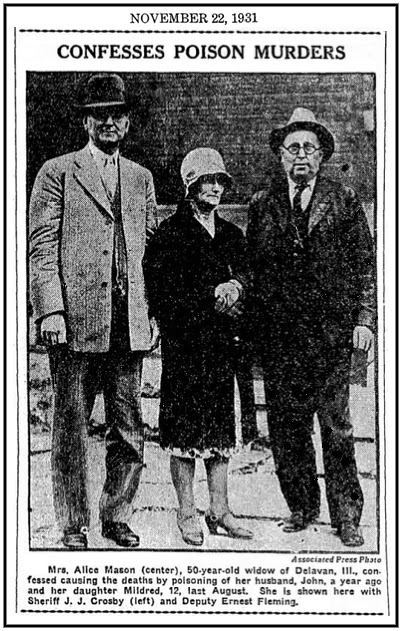 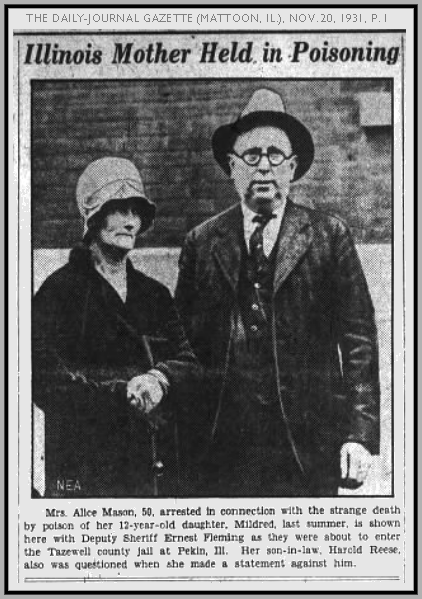