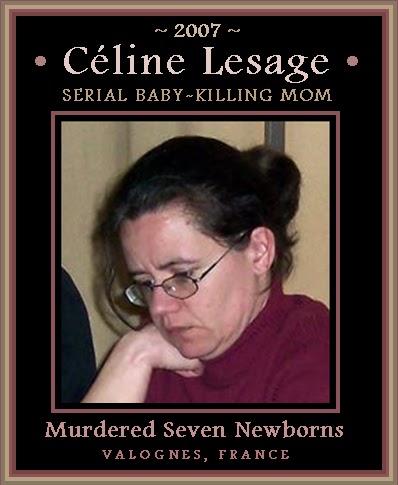 It was on October 19, 2007 when Luc Margueritte, the father of Christine Lesages’s seventh baby, found his newborn child in a trash-can, dead, at their home in Valognes, France, that the murder career of this baby-killer began to unravel. It was his girlfriend’s The discovery occurred after Celine Lesage’s 15-year-old son “was led to the cellar by the terrible smell of decomposing corpses and found them wrapped up in their bags,” as prosecutor Mr Garrandaux explained. There were five dead babies in various states of decomposition, all of them fathered, it was later learned by the boyfriend, Pascal Catherine, who had split with Lesage more than a year earlier. The boy took M. Margueritte down to the ad hoc mausoleum and it was only later that he made his most shocking find.

Pascal Catherine, her 39-year-old former boyfriend fathered the first five murdered children, who were born between August 2000 and September 2007. He was originally arrested for not reporting a crime and hiding the corpses, before his lawyers successfully argued he had thought the babies had been still born or had been aborted.


Each of the babies had been delivered “in secret” between August 2000 and September 2007, with Lesage “putting the babies and their dirty clothes neatly in a sealed plastic bag and hiding them.”

Lesage favored two different murder methods: 1) strangling with a cord, used on two of the babies, and 2), choking the child by placing her finger in its mouth, the technique used in four of the killing.

Lesage was tried and found guilty and on March 10, 2010 sentenced to 15 years for aggravated voluntary homicide. During the trial Prosecutor Michel Garrandaux told the court: “Her attitude was wholly ambivalent. On the one hand she expressed her desire to have children, and then she refused to keep them.” He described  Lesage as a 'modest and otherwise ordinary housewife' who has who had “no idea” why, after the first child, whom she allowed to live, she repeatedly murdered the newborns

Peter Allen of The Daily Mail of London, relying upon the woefully incomplete standard literature on female serial killers,  incorrectly called this “one of the worst infanticide cases in history.