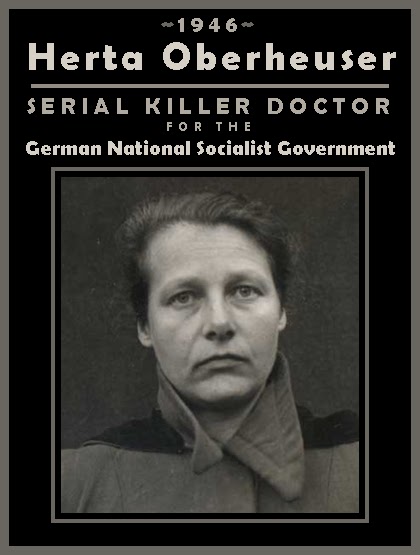 From Wikipedia: Herta Oberheuser (15 May 1911 in Cologne, German Empire – 24 January 1978 in Linz am Rhein, West Germany) was a physician at the Ravensbrück concentration camp from 1940 until 1943.

She worked there under the supervision of Dr. Karl Gebhardt, participating in gruesome medical experiments (sulfanilamide as well as bone, muscle, and nerve regeneration and bone transplantation) conducted on 86 women, 74 of whom were Polish political prisoners in the camp. Oberheuser killed healthy children with oil and evipan injections, then removed their limbs and vital organs. The time from the injection to death was between three and five minutes, with the person being fully conscious until the last moment. She performed some of the most gruesome and painful medical experiments, focusing on deliberately inflicting wounds on the subjects. In order to simulate the combat wounds of German soldiers fighting in the war, Herta Oberheuser rubbed foreign objects, such as wood, rusty nails, slivers of glass, dirt, or sawdust into the cuts.

Herta Oberheuser was the only female defendant in the Nuremberg Medical Trial (United States of America v. Karl Brandt, et al.; December 9, 1946 through August 20, 1947.), where she was sentenced to 20 years in jail.

“She was released in April 1952 for good behaviour and became a family doctor at Stocksee in Germany, only to lose her position in 1956 after a Ravensbruck survivor recognised her. Her licence to practise medicine was revoked in 1958. She said of her service: ‘Being a woman didn’t stop me being a good National Socialist. I think female National Socialists were every bit as valuable as men in keeping what we believed in alive.’” [Allan Hall] 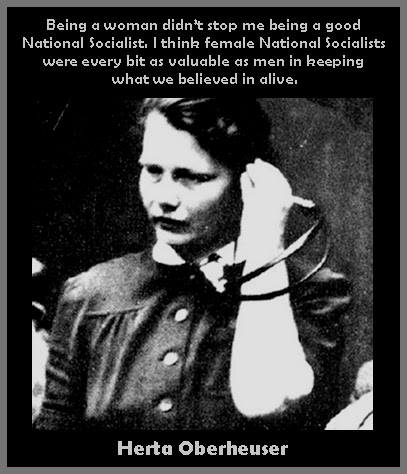