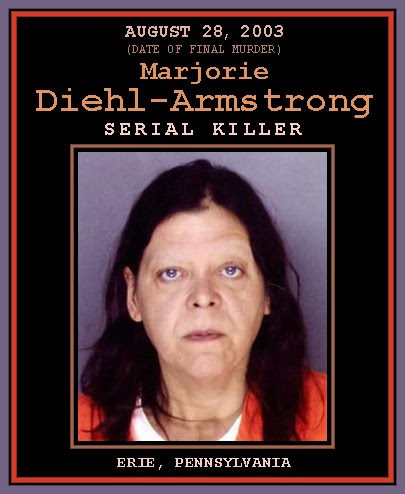 Marjorie Diehl-Armstrong, of Erie, Pennsylvania, killed three men – two boyfriends and a robbery co-conspirator – from 1988 through 2003 and plotted to kill a fourth, her 88-year-old father. Another suspicious death, that of husband Richard Armstrong, who died from a head injury in 1984, may also have been a murder.

“Diehl-Armstrong, 58, was the valedictorian of her high school class, but her trial in Roden's death showed that her life since was full of severe mental problems, including bipolar disorder and schizophrenia – and a deep hatred of men.” [Jennifer C. Yates, “Collar-Bomb Suspect Has Troubled Past,” The Washington Post (D. C.),  July 13, 2007]

Marjorie Diehl-Armstrong “first drew public attention in 1984 when, at 35, she was charged with murdering her boyfriend, Robert Thomas. Diehl-Armstrong claimed she shot him six times in self-defense, and a jury eventually acquitted her.” [Rich Schapiro, “The Incredible True Story of the Collar Bomb Heist,” Wired, Dec. 27, 2010]
http://www.wired.com/2010/12/ff_collarbomb/

“Four years later [1988], her husband, Richard Armstrong, died of a cerebral hemorrhage. The death was ruled accidental, but questions lingered; Armstrong had a head injury when he arrived at the hospital, but the case was never forwarded to the coroner’s office.” [Rich Schapiro, “The Incredible True Story of the Collar Bomb Heist,” Wired, Dec. 27, 2010] 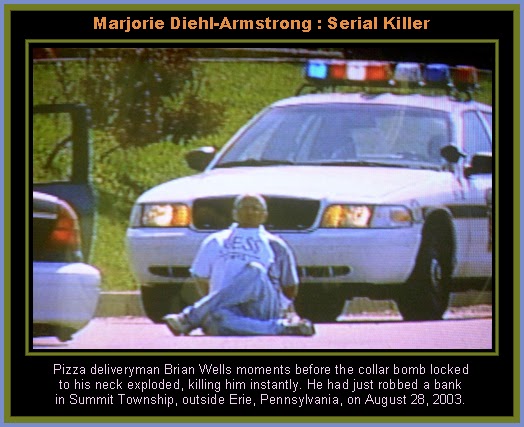 “Brian Douglas Wells (November 15, 1956 – August 28, 2003) was an American pizza delivery man who was killed by a remotely controlled bomb fastened to his neck, under coercion from the maker of the bomb. After he was apprehended by the police for robbing a bank, the bomb was detonated. The bizarre affair was subject to much attention in the mass media. In a July 2007 indictment, federal prosecutors alleged that Wells had been involved in the planning of the botched crime. Two of his alleged conspirators, Marjorie Diehl-Armstrong and Kenneth Barnes, were indicted by a federal grand jury on charges of bank robbery, conspiracy, and weapons charges. Kenneth Barnes subsequently pleaded guilty in September 2008 and largely confirmed that Wells was indeed involved in planning the robbery but also revealed Wells was under the impression an actual bomb would not be used. When he discovered the bomb was real, Barnes said a pistol was fired in order to force Wells' compliance, and witnesses confirmed hearing a gunshot. On December 4, 2008, U.S. District Judge Sean J. McLaughlin sentenced Barnes to 45 years in federal prison for his role in the bank robbery and use of a destructive device during a crime of violence. On November 1, 2010, Marjorie Diehl-Armstrong was found guilty of participating in the crime, and was sentenced to life plus 30 years on February 28, 2011.” [Wikipedia]

Marjorie Diehl-Armstrong had killed two other men previous to the Wells murder.

• James Roden murder
“In 2005, Diehl-Armstrong pleaded guilty but mentally ill to murdering [James] Roden on or around Aug. 13, 2003, about two weeks before Wells' death. His body was found in a freezer at the home of another former boyfriend, William Rothstein, after he tipped off police in September 2003.” [Jennifer C. Yates, “Collar-Bomb Suspect Has Troubled Past,” The Washington Post (D. C.),  July 13, 2007]

A primary motive of Marjorie Diehl-Armstrong for the robbery in which Wells died was to raise money to be spent on a plot to murder her 88-year-old father Howard Diehl in order to gain a substantial inheritance. Majorie had estimated her father’s net worth to be about $1.8 million. It was less, though, about $1 million. Harold Albert Diehl, age 95, passed away on Wednesday, January 8, 2014 at the Pennsylvania Soldiers and Sailors Home in Erie. 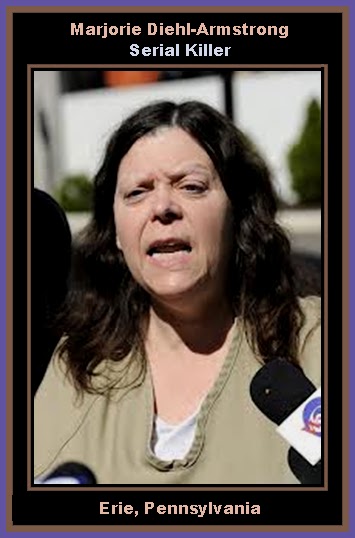 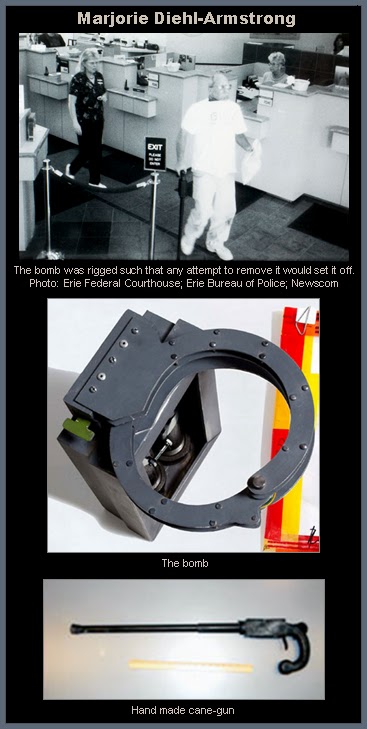 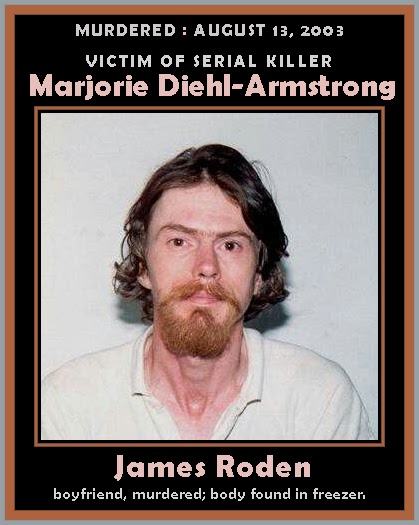 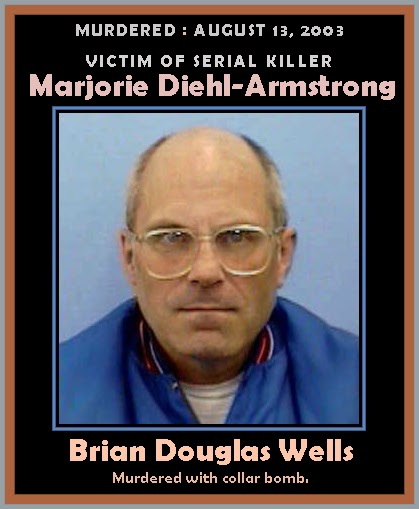 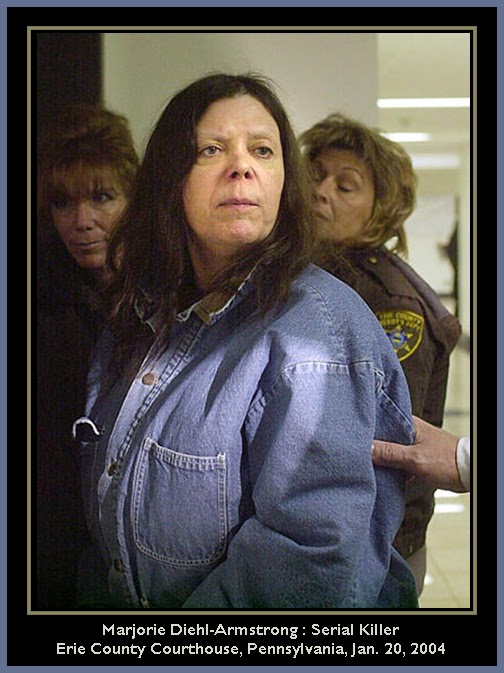 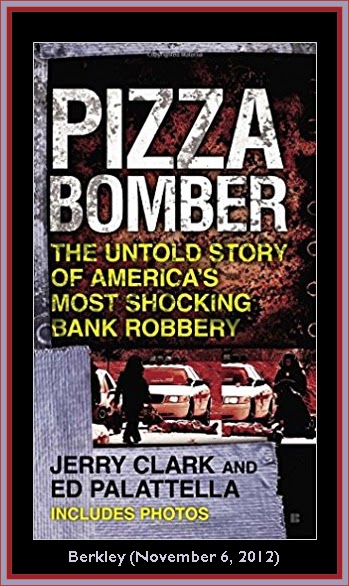 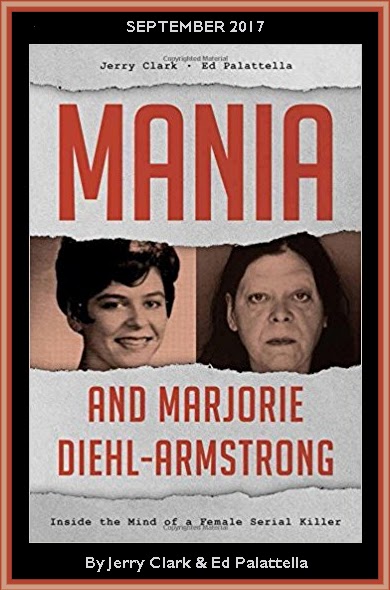