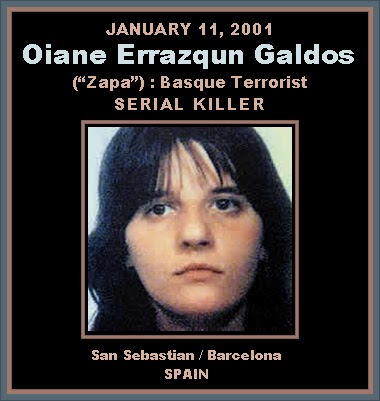 Oiane Errazqun Galdos (27), member of the militant Basque separatist group ETA’s (Euskadi Ta Askatasuna; “Basque Country and Freedom”) lethal Donosti cell operating in the San Sebastian district, was arrested along with a male member – Jose Ignacio Krutxaga Elezkano (37) – on January 11, 2001 in Barcelona while driving a car filled with 40 pounds of explosives. The pair were among Spain’s most wanted terrorist and were regarded as responsible for a series of politically motivated murders. A pistol was captured from Krutxaga that is thought to be the weapon used in three separate earlier attacks in Barcelona.