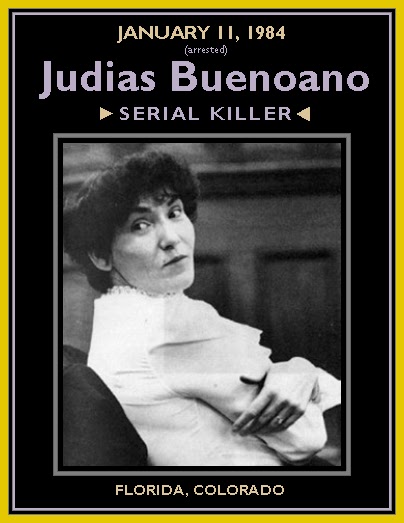 Judias Buenoano is known to have committed 3 murders – James Goodyear (her husband) / Bobby Joe Morris (her boyfriend) / Michael Goodyear (her partially paralyzed 19-year-old son) –  and was suspected of two others. Her methods included arsenic poisoning, drowning and dynamite (plus gunshot and sharpened blade in one of the unconfirmed cases). Her confirmed victims were husbands, boyfriends and a teenage son. She also committed arson on multiple occasions.

1960 – She was employed as a nursing assistant in Roswell under the assumed name of Anna Schultz.
1961 – She gave birth to an illegitimate son whom she christened Michael Schultz, whose name was later changed to Michael Goodyear. (In 1979 he becomes a paraplegic as the result of arsenic poisoning.)
Nov. 21, 1962 – Married to James Goodyear, who was an U. S. Air Force sergeant.
1968 - Judi open her first business, the Conway Acres Child Care Center in Orlando, with the financial backing of her husband.
Sep. 15, 1971 – James Goodyear, died, arsenic, Judi cashes in his 3 life insurance policies. received $28,000 in life insurance.
1974 – According to a deathbed confession by Bobby Joe Morris, she and Morris committed a murder in Alabama in 1974. Police were unable to find enough evidence to press charges.
1980 – Gerald Dossett, boyfriend in Alabama, died. After her arrest, Dossett’s body was exhumed and analyzed for signs of arsenic poisoning. No charges were laid in that case. Dossett had been shot in the chest and had his throat cut.
Jul. 1977 – arson burning of house for insurance
Jan. 23, 1978 – Bobby Joe Morris boyfriend (cohabiting since 1972), death, arsenic. She received $50,000 life insurance payment.
1978 – Judi legally changed her surname and that of her children to Buenoano, the Spanish equivalent of Goodyear, in an apparent tribute to her late husband.
1979 – Her son, Michael Goodyear became severely ill in 1979, his symptoms including paraplegia.  Post-mortem examination indicated that he had been the victim of severe arsenic poisoning, which caused his disability
May 13, 1980 – Judi took sons Michael (19) and his younger brother, James, canoeing on the East River. The canoe capsized. James and Judi were able to get out from under the upturned canoe but Michael, weighed down by 15 lbs. of braces without a life jacket, drowned. She received $125,000 life insurance payment.
June 25, 1983 – Judi announced she was pregnant and John went out to get some champagne to celebrate. When he started his car, a bomb exploded and he was seriously injured as a result. She was arrested and bailed on the charge of attempted murder of John Gentry.
Jan. 11, 1984 – She was arrested again and charged with first degree murder in the drowning death of crippled son Michael Goodyear.
June 6, 1984 – sentenced to life without parole for murder of son Michael Goodyear
Oct. 18, 1984 – found guilty of attempted murder of John Gentry. She confessed that she was the beneficiary of a $500,000 policy on Gentry.
Nov. 1, 1984 – found guilty of the murder of James Goodyear
Nov 11, 1984 – sentenced to death by electrocution
Mar. 29, 1998 – Judi’s last appeal was turned down. Governor Lawton Chiles signs her death warrant.
March 30, 1998 – Executed

“I didn’t ever kill anybody, Judge Thompson,” she said. “I didn’t kill my husband. I didn’t bomb Mr. Gentry’s car. That’s the truth. I never knowingly harmed anyone in my life. I ask the court to spare my life.” [“‘Black Widow’ Sentenced To Die For Killing Husband,” UPI, Nov, 27, 1985] 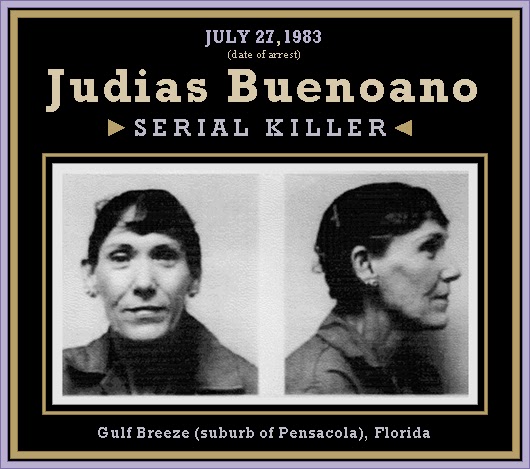 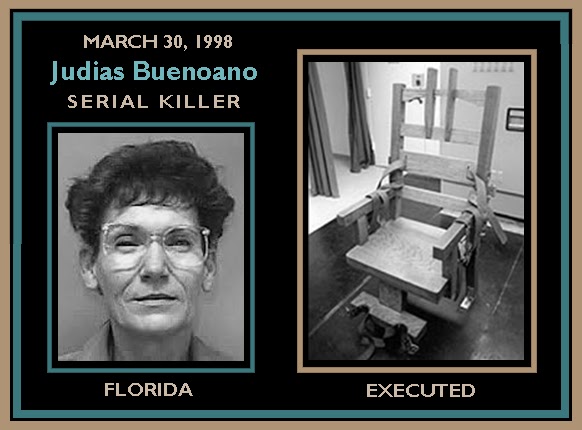 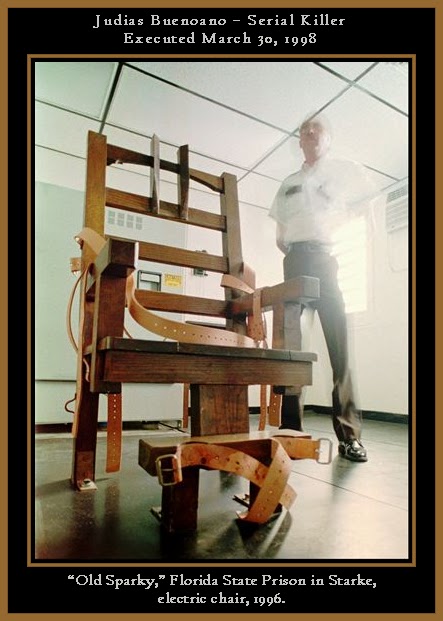 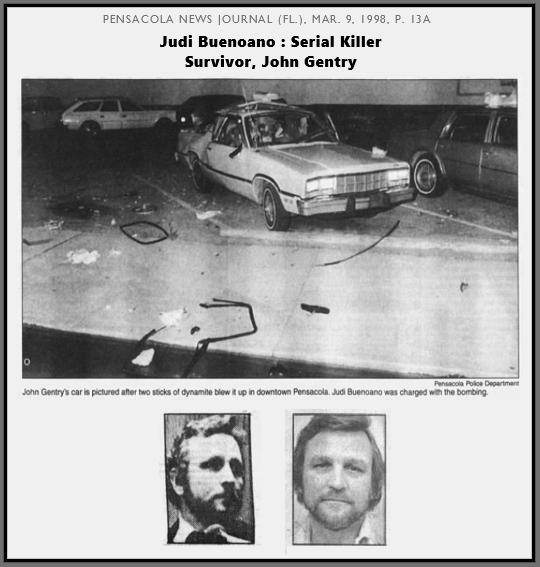 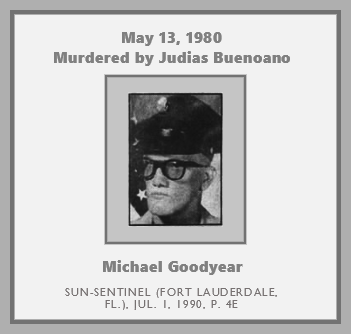 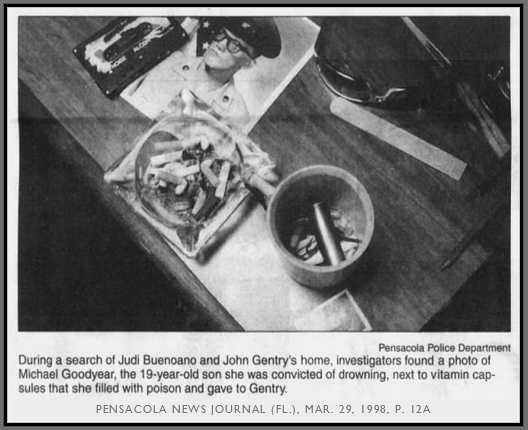 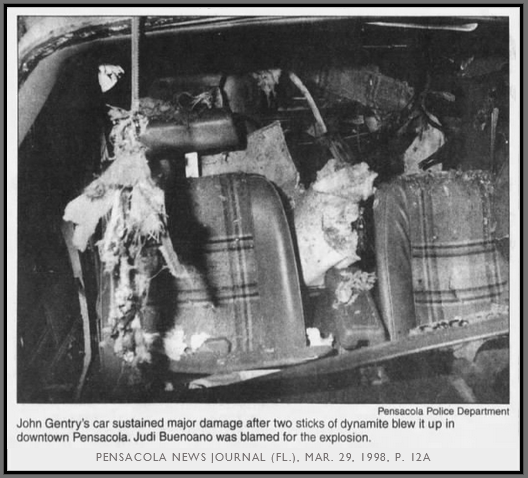 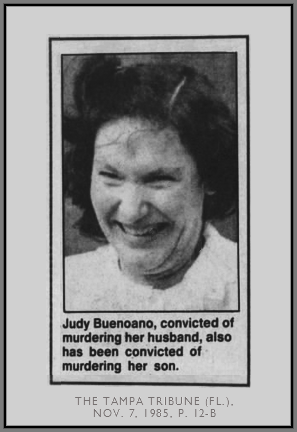 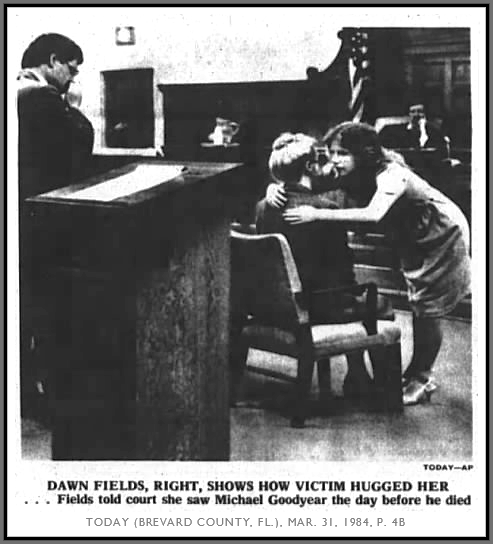 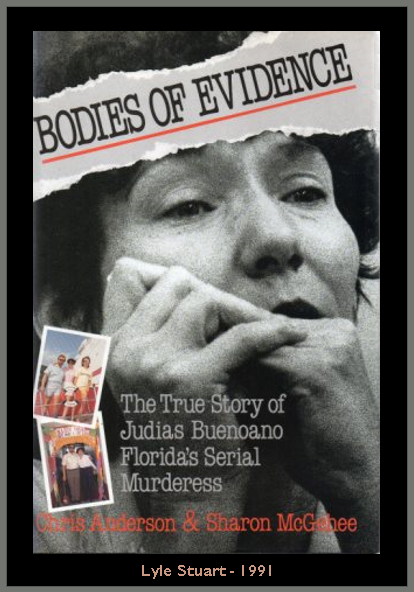