The Murder of Cecilia Reil: Violence by Women Against Women in Philadelphia - 1951 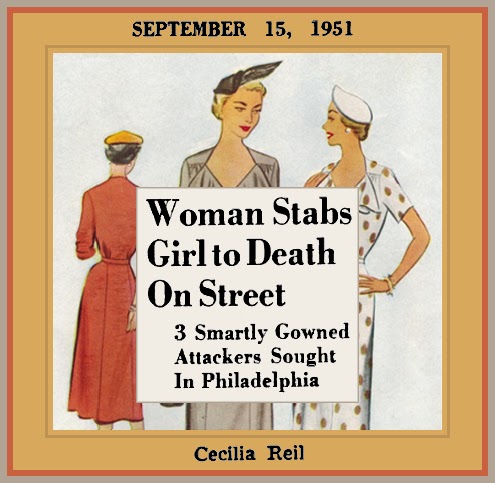 The patriarchy works in mysterious ways.

FULL TEXT (Article 1 of 2): Philadelphia , Sep. 14 – Fifteen-year-old Cecilia Reil was stabbed to death on a mid-city street today by one of three smartly dressed women who fled in a taxicab.

Miss Reil, a high school sophomore, was stabbed at least six times in the chest and back as she chatted with Paul Schmal, 22, a senior and friend.

Police quoted Schmal, a bus boy at a hotel as giving this account  of the fatal attack:

Cecilia was sitting on the front steps outside the house where she lived in a third-floor apartment. Schmal came along and talked with her a while and then the two walked up the street, stopping under the canopy of a hotel. Another girl – friend of Cecilia – met them but Schmal didn’t hear her name.

As they talked, three women came along and the two girls. They passed, but shortly after turned and came back and pounced on Cecilia. One of the assailant’s companions said:

“That girl (Cecilia) called this girl (pointing at the killer) a bum.”

“No, she didn’t,” Schmal contradicted. “I was right here and she didn’t say a thing.”

After the attack the slayer, followed by her two companions, earn to the corner and entered a cab. Schmal tried to stop the cab but he was unsuccessful.

In Pennsylvania Hospital Cecilia’s mother, a waitress at a nearby tap room, arrived shortly before the girl died. Cecilia regained consciousness to say:

“Oh, mother, mother, kiss me! I didn’t know these girls. Why did this have to happen?”

FULL TEXT (Article 2 of 2): Philadelphia – A 15-year-old girl talking with a friend on the doorstep of her home early yesterday, was attacked and stabbed to death by a young woman in a black dress whom she did not know, Detective Sgt. Robert Wentz reported.

The victim, Cecilia Reil, was knifed six times in the chest and back. Her attacker fled in a taxi cab with two girl companions.

Wentz said Paul Schmal, 22, a hotel bus boy who was chatting with Miss Reil when she was attacked, gave this account of the slaying:

Schmal was talking to Cecilia and another girl, who was not  otherwise identified, when three young women approached. All wore dressy clothing as though they had been at a dance or a party.

Suddenly, the shortest of the three woman rushed toward Cecilia.

Then, Schmal said, he saw “something flash,” in the glare of the street lights. To Schmal “it looked like she was plunging it again into Cecilia.”

The girl died within an hour.