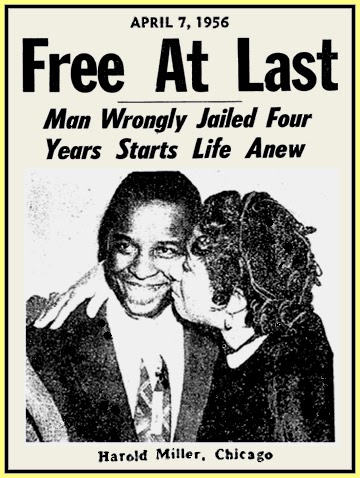 FULL TEXT: (Chicago, Illinois) – Life for Harold Miller this week took on all the sweetness of the candy he used to mix before he spent four years in prison for a a crime of which he was falsely accused and convicted – a crime which in all likelihood was only the figment of a tortured mind.

Before his four-year nightmare began, Miller, who is now 31, was a chocolate mixer at a candy company. Quiet and unassuming, he lived with his mother, relaxed after work with his friends and engaged in the usual activities of any normal Chicagoan.

One fall night in 1951, Miller was riding on a bus, unaware that a woman passenger was pointing him out to her husband as the man who had raped her four nights before. When he left the bus he was trailed by the husband of Mrs. Barbara Latimore, while she rushed to call the police.

Arrested, Miller was accused of having accosted Mrs. Latimore in a vacant lot, dragging her to the rear porch of a house at 3429 S. Indiana ave., and attacking her.

The testimony of free friends – who took lie detector tests – that the accused man had been with them at the time of the alleged rape bore little weight with the police.

But there were people who believed in his innocence. Jim McGuire, Sun-Times Reporter; Roy Woods, Miller’s stepfather, Charles Lieman, his attorney; and Ken Doughty of the Civil Liberties committee worked tirelessly to clear him.

McGuire died, but the others persevered. They found that Mrs. Latimore was a chronic schizophrenic, who was capable making even the most fantastic lies sound plausible. Two years after the after the alleged attack she was committed to Manento [State Hospital] for a series of shock treatments.

She was released conditionally in Feb. 1954, and her discharge became permanent one year later.

On November 10, armed the information about Mrs. Latimore’s mental condition, and with the fact that a medical examination had failed to substantiate the claim of rape, Liebman asked Judge A. Sbarbaro, who had sentenced Miller, for a new trial.

Judge A. Sbarbaro refused the request and Liebman appealed to the Illinois Supreme Court, which ordered a new trial.

Last week, three psychiatrists and a psychologist explained to Judge Sharboro the mental delusions under which Mrs. Latimore was suffering at the time of the accusation and pointed out that Miller had been convicted on her testimony alone.

Judge Sbarbaro said he would hold a new trial and declared that the conviction had been “an injustice to the individual and to the community.”

Miller would not have to endure the ordeal of the new trial, because Assistant States Prosecutor Francis Riley said the state will not re-open the case.

With tears in his eyes, Miller thanked the people who had worked to free him – all that is, except Jim McGuire. But Mrs. McGuire knew how her husband would have felt. She said:

“It is wonderful. I am sad to think that Jim was not present, but I feel that he won from the grave. This is the third man he had gotten out of prison.”

As for Miller, he has no ill-feeling toward anybody. He summoned up his ordeal this way:

“I believe that God and trusted Him all the way. At times, when everything seemed hopeless, I lost faith, but each time it was quickly restored.”

Harold Miller was the unfortunate victim of a sad miscarriage of justice. Back home with his mother at 7325 South Parkway, he is adjusting himself to the fact that the future holds more for him than the prospect of life in prison.

He does not know if he will go back to making candy, but of one thing he is certain – life itself had never been so sweet. 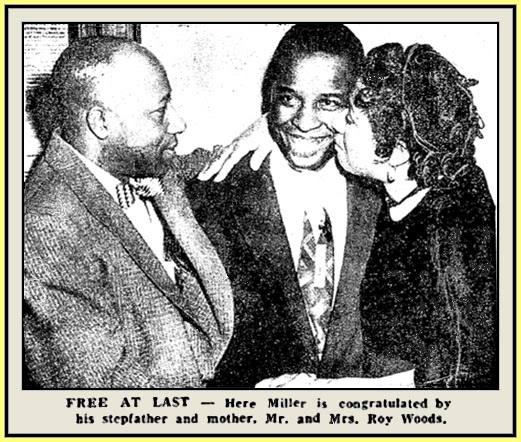