Many Patriarchs: Much Oppression - The Sufferings of Sarah Prather - 1904 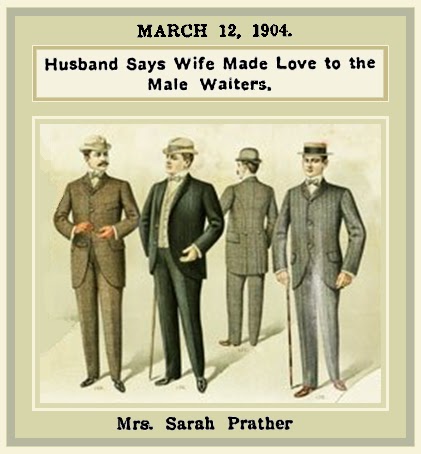 FULL TEXT: Pueblo, Col., Mar. 1. – The suit of Mrs. Sarah Prather against Frank Prather for absolute divorce was thrown out of court this morning when it was found that contrary to the laws she had married Prather only three months after obtaining a divorce from her previous husband.

Up to this time the suit had developed considerable warmth and interest. Mrs. Prather had secured her husband under false pretense. She had not told him that she had been married three times previously and that therefore he was only No. 4. The couple were made one Aug. 3, 1901. Husband no. 3, whose name was T. Crudgington had been dropped only three months earlier, unknown to Prather. What the dates of the previous marriages and divorces were he has not yet discovered.

The story of the conjugal bliss previous to the filing of the suit is a sad one. Prather says that his wife was tyrannical and cruel. He is physically a small man and has never enjoyed good health. The wife is, on the other hand, big, handsome and strong. She has also two daughters of good physique. Singly and together he claims, that they would beat him. Sometimes they did it because he had no money to give them, at other times just for the mere pleasure of it. Two months ago they put him out of doors after midnight and he had to seek shelter to keep from freezing. He claims to have been always patient, to have never lost his temper, and after getting the worst possible thrashing he would only gently remonstrate. Last summer Mrs. Prather opened a restaurant. This was the beginning of the end.  She soon fell into the habit, says the husband, of bringing the male waiters home with her, right into the home he had himself bought, and to show them preference. In his own presence she made love to them.* when he remonstrated, and he always did so gently, she alleges, she would forcibly eject him.

But one night when she returned after midnight with a man the long-suffering worm turned. Prather lost his temper and became violent. He insisted that she would have to give up the company of other men entirely. The wife, still accompanied by the waiter, thereupon left the house and spent the night elsewhere. The following morning she swore out a complaint against her husband for creating a row and had him brought before the police court, where he was fined because he would not expose his shame and defend himself.

* Note: The phase “make love,” at this time, referred to flirting and other verbally or physically affectionate behavior, to intercourse.