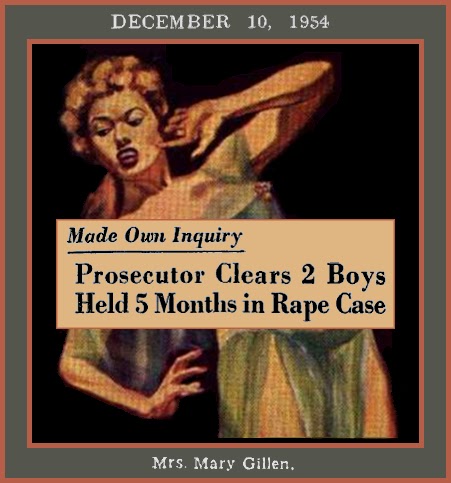 In studying the case against them, based solely on the testimony of the alleged victim – a fifty-one-year-old woman – the prosecutor came to the conclusion that parts of her story “did not fit.”

After thorough investigation. Mr. Andreoli came into General Sessions with new evidence yesterday showing that the woman, Mrs. Mary Gillen, of 44 W. 86th St., had been intoxicated and “had imagined it all happened.”

As a result, Judge Harold A. Stevens dismissed the charges against the boys, praised Mr. Andreoli for “excellent work in the highest tradition of the District Attorney’s office” and tongue-lashed Mrs. Gillen for “one of the most reprehensible things that the court has experienced.”

The boys, both unemployed restaurant workers, were arrested at 2:10 a. m., June 25 in Central Park near W. 88th St., when police found Mrs. Gillen “almost naked” lying on a path near them. Mrs. Gillen charged that they accosted her, forced her into the park at knife-point, tore off her clothes and attempted to rape her.

The boys were locked up in default of $10,000 bail each and were lodged in the Tombs waiting trial, scheduled for next week. Mr. Andreoli began working on the case and questioned all concerned.

He obtained from police records the name of a man who had been strolling on Central Park West at the time of the alleged rape. He was John J. Brady, of 58 North Lansing St., Albany.

With the co-operation of Albany police, Mr. Andreoli had Mr. Brady returned to the city. He questioned him and later had the witness confront Mrs. Gillen. Mr. Brady, the prosecutor said, told him that he was helping a crippled woman that morning when Mr. Gillen, whom he described as being drunk, approached him and tried to kiss him. Mr. Brady said he pushed the woman away and watched her “stagger toward the two kids.”

Mr. Adreoli said he then questioned Mrs. Gillen, who admitted she had visited several bars that night and that “her recollection was not too good.” She admitted that Mr. Brady looked “familiar” and then, according to Mr. Andreoli, “admitted that the story she told police was what she imagined had happened as she could not see why she should be in the park with these two boys.”

Judge Stevens dismissed the indictment on Mr. Andreoli’s recommendation and told him:

“When we find an official who not only accept the allegations but, when some occasions arise which create a doubt in his mind he uses all the facilities and resources at his command to ascertain the truth, we feel that he is deserving of the highest commendation, and we do so commend you.”