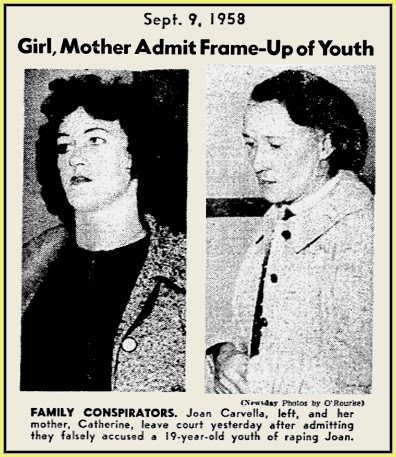 FULL TEXT: Mineola – A woman and her pregnant daughter yesterday admitted plotting to frame a youth on a phony rape charge after he had refused to marry the girl.

Police said the two hatched the plan after an argument with the 19-year-old East Meadow truck driver and his parents on Sunday. The girl, 20-year-[old] Joan A. Carvella and her mother, Catherine, then drove to a police station and filed a charge of first-degree rape – a charge later denied by the youth, Police uncovered the plot when the women’s stories failed to check out.

“I guess we didn’t think about what were doing. We acted too fast,” Mrs. Carvella, 39, said yesterday after she and the girl pleaded guilty to filing a false report and entering into a conspiracy. Both charges are misdemeanors.

The intended victim of the mother-daughter conspiracy, William Porter of 1852 Cole Dr., East Meadow, was unaware that the women had gone to police until informed last night by Newsday. “I’m shocked. I don’t know what to think,” he said. “I met her about four months ago and went out with her a few times. My friends said they heard she liked me. and then she used to follow me around. Nut I wasn’t interested. I haven’t seen her in the past 10 weeks.”

Porter denied being the father of the girl’s unborn child. “Out of the blue, the gal came to my home Sunday morning and told me she was pregnant. She spoke to me and my father and wanted to know what we were going to do about it. I said I had nothing to so with it and after about 15 minutes she left. On Sunday night, the girl, her mother and some relatives came over and started all over again,” he said. But, he said, he resisted all demands to marry Jean.

The mother and the daughter, who live at 32 George Ave., Hicksville, cooked up a plan as they drove home from the Porter house. After making up their story, they drove to the Second Precinct at about 10:30 PM and saw Det. Andrew Heberer. They told him that Porter had taken John out on their first date Saturday night. On the way home, the Carvellas said, he stopped along Division Ave., Levittown, and forced Joan to submit to him.

Heberer said the women’s statements appeared to contain inconsistencies. Among other things, the girl said she had not threatened with any weapon. She said she did not scream and suffered no bruises. After about three hours, Heberer said, the mother and the daughter broke down and admitted they had decided to file the rape charge to get even with the youth and his family.

Both women stood stiffly in First District Court yesterday and each spoke bthe word “no” when asked if she wanted an attorney and the word “guilty” when asked for a plea. Judge Edwin R. Lynde released both in $500 bail to await a probation report and sentencing Sept. 22.