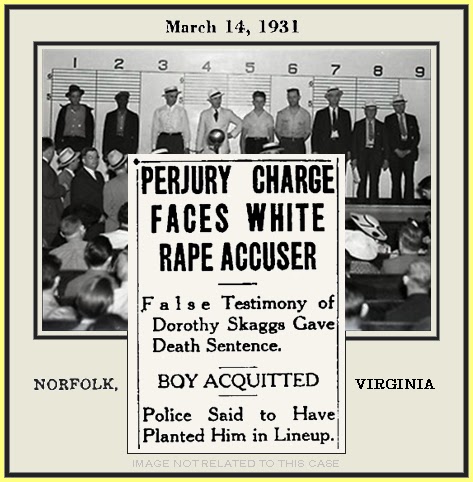 FULL TEXT: Norfolk, Va. – What punishment will the Commonwealth of Virginia mete out to Dorothy Skaggs, a white woman, whose false testimony sent William Harper, 22, to the very shadow of the electric chair? And who and what will be done with the police officers who she said deliberately planted the luckless lad in the lineup for her to pick him out for the sacrifice of death?

These questions hung on the minds on the minds of a breathless throng of white and colored men and women who heard a white jury pronounce Harper not guilty after one of the most sensational “rape” trials ever heard in this country, which ended here Saturday.

Harper, who was a friendless and ignorant youth, was on trial for the second time. He had been convicted of criminally assaulting the white wife of a sailor and had been sentenced to die in the electric chair.

He was “identified” from lineup on January 6, as the man whom Mrs. Dorothy Skaggs said had attacked her, pulled her into an alley and criminally assaulted her. She went on the witness stand in the first trial and swore to this. It was corroborated by a signed confession obtained by police and, following conviction, the sentence of death was passed.

The conviction and sentence to death of Harper occurred on January 29, and a week later the verdict was set aside by Judge A. R. Hankle, who presided at the first trial, on the grounds that full disclosure of the facts had not been brought out at the trial.

Among the sensational developments brought out at the second trial, which recruited in the freeing of the youth, were the following:

1. Mrs. Skaggs confessed to T. E. Gilman, white Portsmouth attorney, that she had falsely accused the youth to cover up the fact that she had spent the night of January 6, at an Elizabeth City (N.C.) road house with W. P. Kid, a married man.

2. The white woman testified that the youth’s accuser was at the road house at the time she said the crime was committed.

3. Mrs. Skaggs, it was testified, had stated that police officers gave her the description whereby she “identified” Harper in a lineup. It was stated that Harper was picked because he was ignorant and that there would be little bother if he were sent to the chair.

4. Commonwealth’s attorney, Harry E. McCoy, had been apprised of all these facts but refused to use them to the end that justice might be done.

5. police officers “skeered” Harper into making the “confession” which helped to bring about his own conviction and sentence to the death chair.

An AFRO-AMERICAN representative here found an almost community-wide demand that the Mrs. Skaggs be prosecuted on a perjury charge and that the white police officers who “planted” Harper in the lineup also be prosecuted.

A leading column-and-a-half editorial in the Norfolk Ledger-Dispatch, white daily, calls upon Commonwealth’s Attorney McCoy to swear out a warrant at once charging Dorothy Skaggs with perjury. “This woman,” it says, “was on the stand, after having been put under a lawfully administered oath, and swore falsely. She put an innocent man in the very shadow of the electric chair by her false testimony. If this is not a material matter or thing, then human life is not material.”

An AFRO-AMERICAN representative at the trial found Harper almost unconcerned about what was going on. As the commonwealth’s attorney cross-examined witnesses, he spat tobacco juice.

The prisoner’s desk was used as a press box, and before court opened Harper sat and chatted with press representatives. There was no evidence of mob spirit.