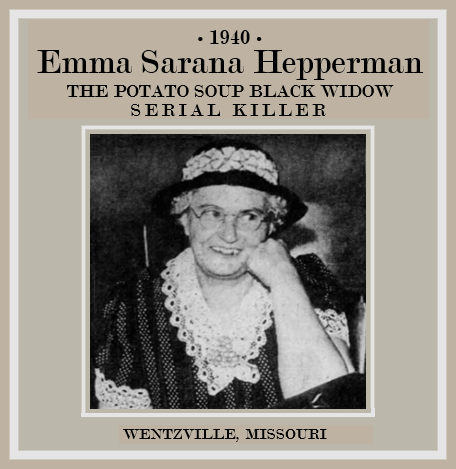 Emma Hepperman was suspected to have murdered up to six husbands, a mother-in-law, possibly a daughter, and to have poisoned a step-daughter, who survived due to diagnosis following her father’s death. Newspapers spell the name in two ways. Apparently, the spelling with one "n" is correct.

FULL TEXT: St. Charles, Mo., June 4 – Mrs. Emma Sarana Hepperman, who was married seven times, was charged in a warrant today with murder by poison of her last husband, Tony Hepperman, whom she met through an advertisement for a position as a housekeeper.

The warrant was issued by Justice of the Peace Gus Temme after a coroner’s jury had returned a verdict stating that Hepperman, 53-year-old farmer, had been poisoned. He died six weeks after his marriage.

In a deposition read at the inquest, Dr. J. L. Neubeiser, who treated Hepperman at a hospital here, said the farmer made “a ‘dying declaration’ that he believed his wife had poisoned him.”

A short, heavy-set woman with gray hair, Mrs. Hepperman, 46, has exhumed several days ago and the vital organs were examined in the laboratory of the state highway patrol at Jefferson City, Schneider, 56, a farmer living near St. Peter’s, Mo., died last September 19 after being ill two days.


FULL TEXT: A Franklin County jury found Emma Heppermann of St. Charles County guilty of poisoner her punishment at life punishment. Judge Breuer gave the case to the jury Thursday evening shortly before six o’clock but no verdict was returned until 11:30 Friday morning. Mrs. Heppermann was found guilty on the first ballot taken by the jury, but it required nearly nine hours of balloting before her punishment was fixed, two jurors holding out for the death penalty.

Mts. Heppermann was married seven times; two husbands secured a divorce but the other five died under rather unusual circumstances. A son of her sixth husband told a representative of the Tribune that his father had the same “stomach trouble” as Tony Heppermann; that there was also a “robbery” and that all circumstances of his father’s life with the defendant had paralleled the incidents leading to Heppermann’s death.

Arguments for a new trial were presented before Judge Breuer Thursday afternoon at two o’clock. 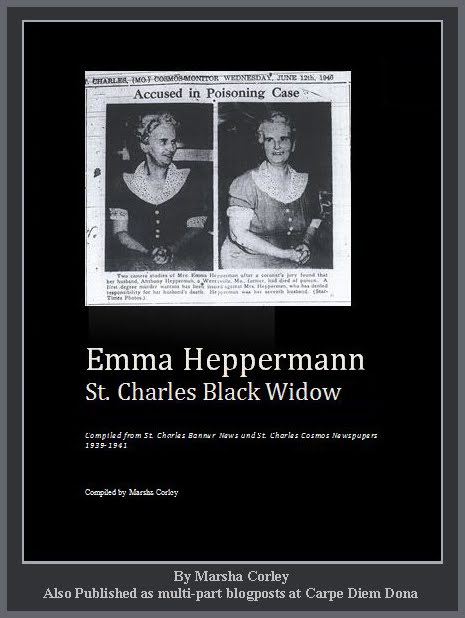 Notes based on the research of Marsha Corley:

OVERVIEW: Emma Hepperman, 46, was arrested the day after her 53-year-old seventh husband, Tony Hepperman, died in St. Joseph’s Hospital in St. Charles, Missouri. They had been married only five months.

She was born in 1883 and claimed she was married to her first husband at the tender age of 14 and had twelve children from that marriage, yet no records have been found that would support her claim. Charles Schwack died in 1925 and Emma went hog-wild from then on in the marriage department, picking up six additional spouses, four others of whom died in her home, and, according to her, two who divorced her.

After arsenic had been found in the blood of the deceased Tony Hepperman it was discovered that 12-year-old step-daughter Ethel Hepperman who had been ill for weeks had also been poisoned. Investigation brought out the facts of her busy matrimonial career involving spousal suspicious as well as ordinary seeming (at the time) deaths, including a daughter from her first marriage and a mother-in-law. 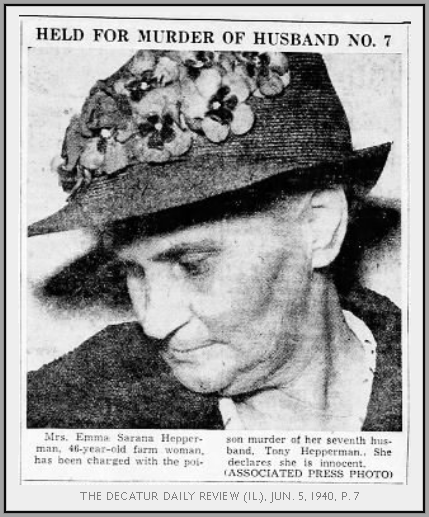 EXCERPT 1: At the trial for the murder of Tony Hepperman Alphonse Schneider, brother of husband number six:  “She told me three times she wanted to kill me,” he testified. “One day, in the midst of a quarrel, she said she wanted to cook me some soup.” Schneider leaned close to the jury and said, “I sure am glad I didn’t eat any of that soup.”

EXCERPT 2: Mrs. Eagan [daughter of Tony Hepperman] said that on the Friday before her dad’s death he told her his wife had talked him into the notion of selling the farm and getting away as everyone was butting into their business.

EXCERPT 3: Inquest Testimony: The oldest daughter said that after her father was brought to the hospital he told her that when he was in St. Louis the Sunday evening his wife brought him coffee with the poison in it and also water with the same stuff in it but he refused. “She sat at my bedside, waiting for me to die,” the victim told his daughter. Shortly after that the officers came and took the woman away. [“Startling Evidence At Inquest Into Death Of Hepperman Brother Was Suspicious Of Woman’s Actions - Prosecuting Atty. Dyer Announced First Degree Murder Charges Would Be Filed,” St. Charles Weekly Cosmos-Monitor (St. Charles, Mo,), Jun. 5, 1940; quoted in e-book]

EXCERPT 4: Inquest Testimony of Steve Hepperman, Tony’s brother: “When got back wheeled him on a chair to his bed, and he looked at me and he said: ‘My God who would have thought she would poison me,’ and he asked me, ‘do you think why would she want to poison me I was so good to her?’ He said ‘where is she?’ and I said ‘in jail.’ He said ‘then keep the dam old bitch there.’” [“Startling Evidence At Inquest Into Death Of Hepperman Brother Was Suspicious Of Woman’s Actions - Prosecuting Atty. Dyer Announced First Degree Murder Charges Would Be Filed,” St. Charles Weekly Cosmos-Monitor (St. Charles, Mo,), Jun. 5, 1940; quoted in e-book]

EXCERPT 5: Trial: Witnesses for the State yesterday included Steve Heppermann, brother of Tony and Mrs. Rosie Simpson, Negro laundress, who worked occasionally for the Heppermans. The brother testified that four days before his death his brother had known he was poisoned. Mrs. Simpson testified that Mrs. Hepperman told her shortly before Hepperman’s death, “Hep has $1,000 and I’m going to get it.”

EXCERPT 6: Mrs. Emma S. Hepperman, seven times married woman, was found guilty by a jury of twelve men in the circuit court of Union, shortly before noon today and was sentenced to a term of life imprisonment in the Missouri penitentiary. The verdict was returned after deliberation of nine hours. Three ballots were necessary before her punishment was fixed. Two of the jurors held out for the death penalty on the first vote while one voted for death the second time. The third ballot was unanimous for life. 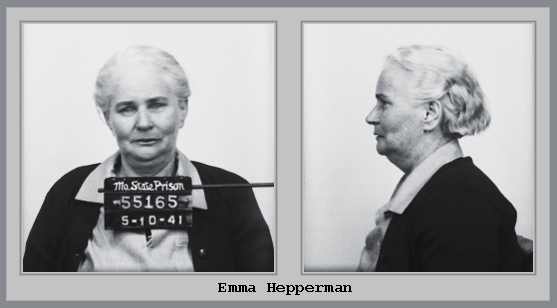 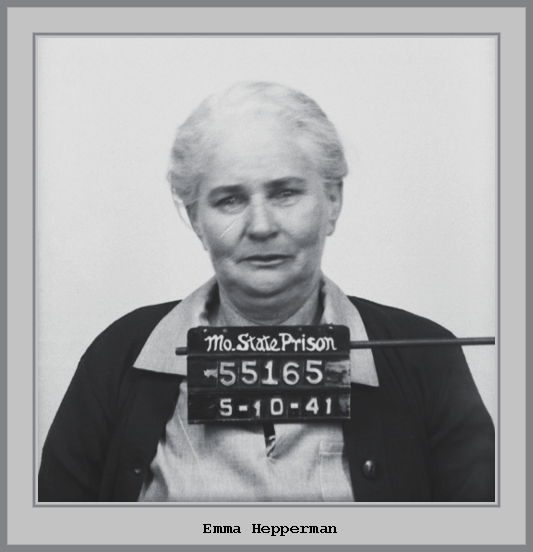 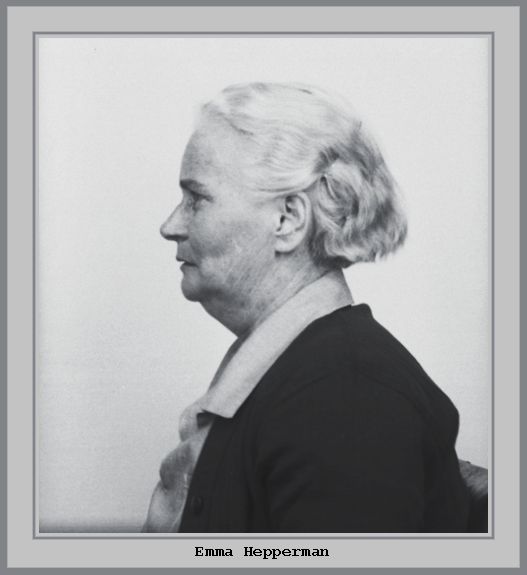 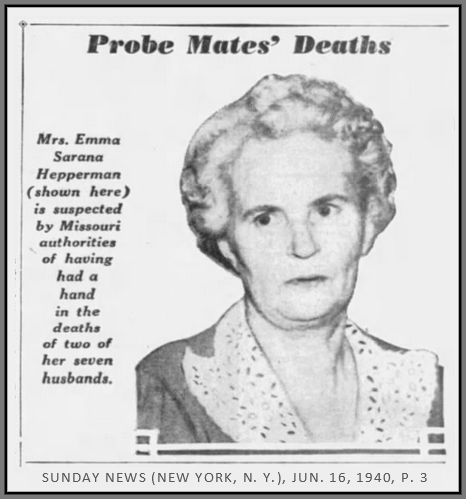 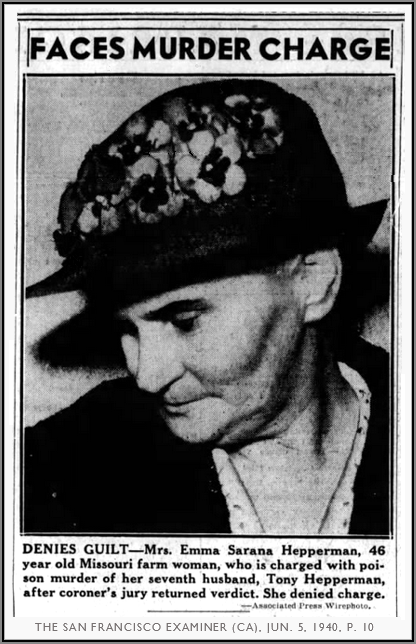 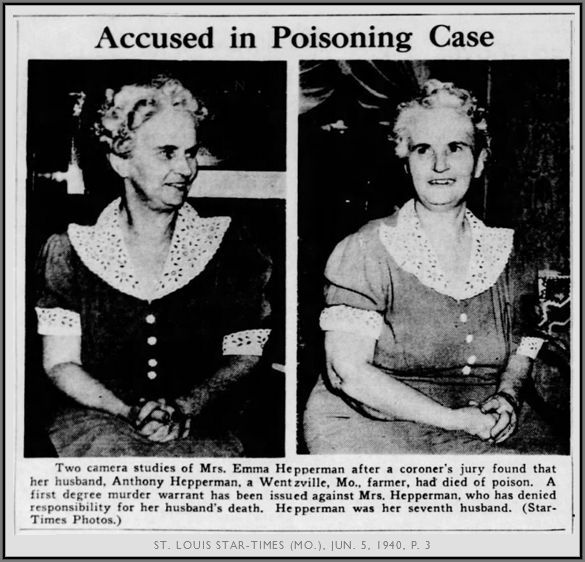 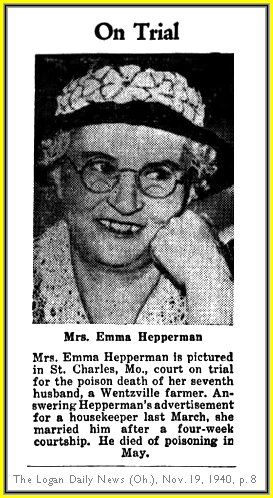 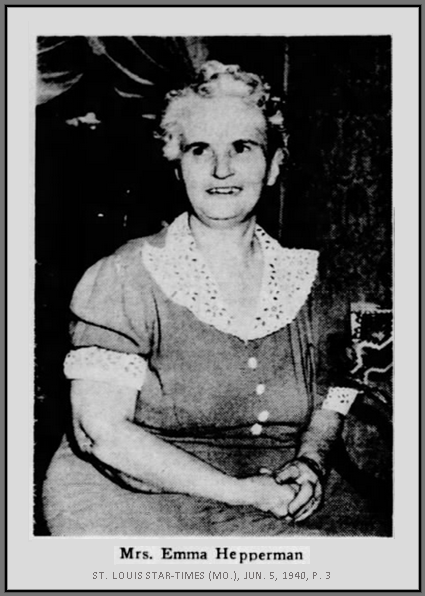 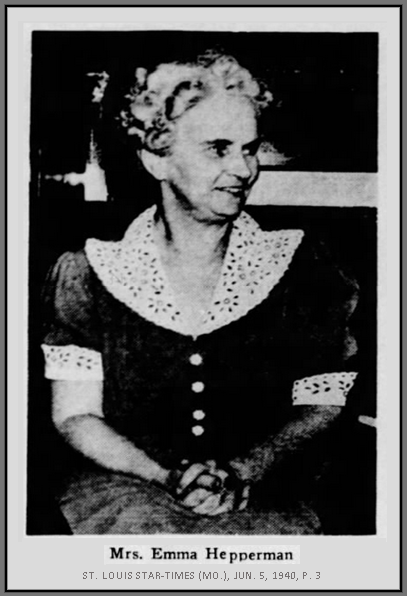 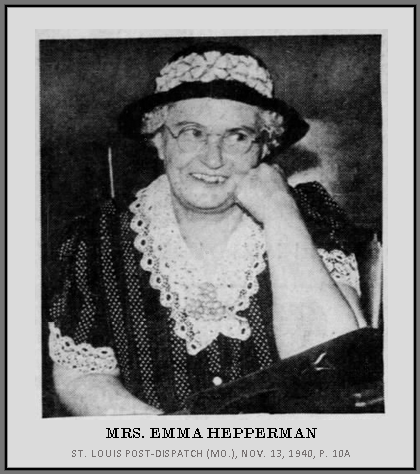 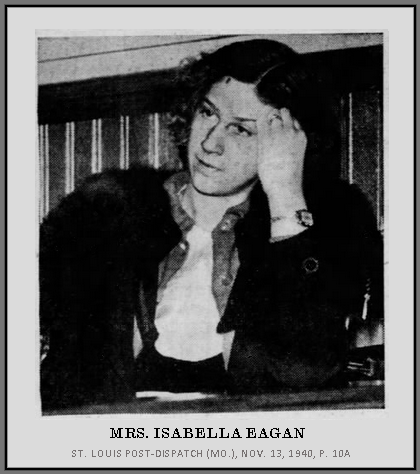 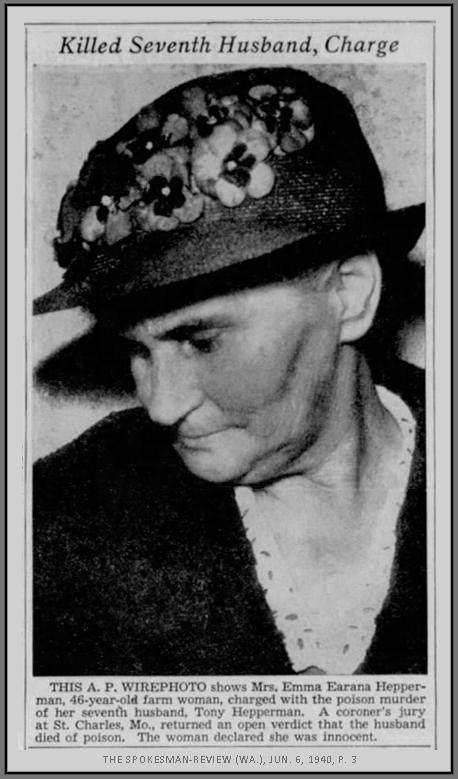 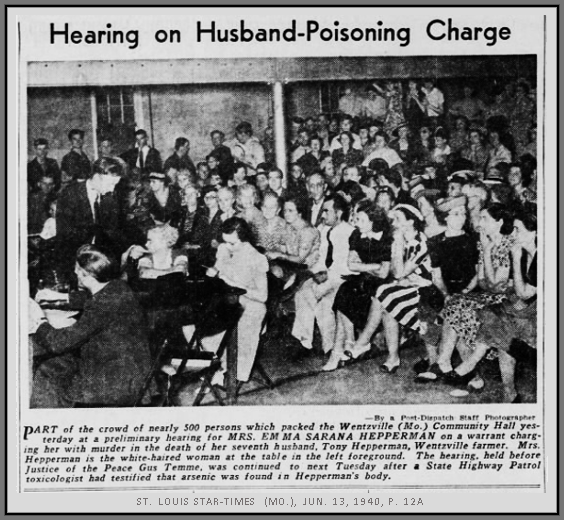 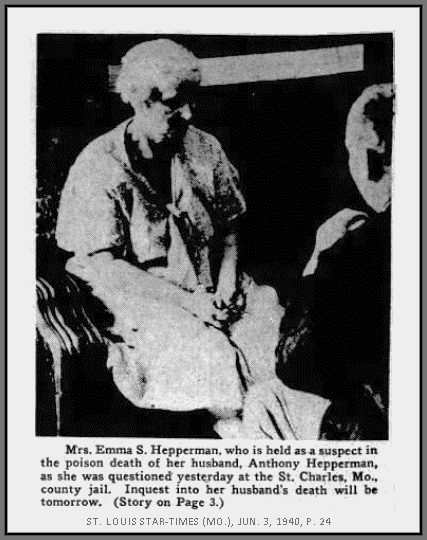 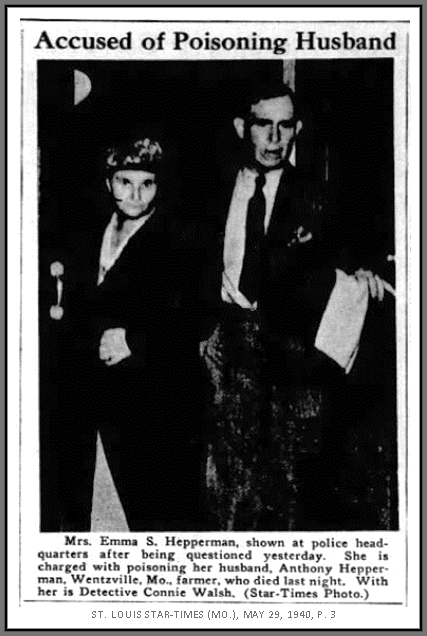 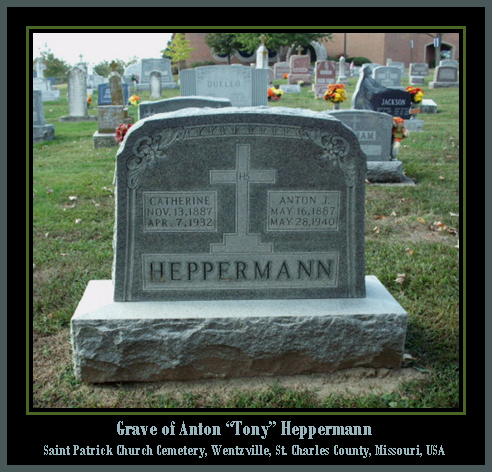 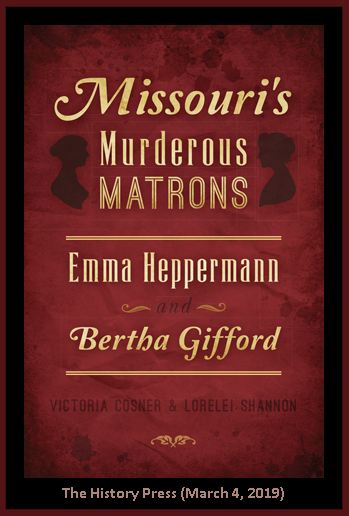