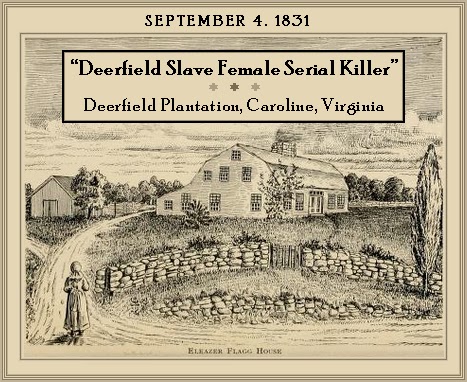 Note: This is one of several cases of a female slave who repeatedly poisoned their owners or other members of the master’s household.

EXCERPT: Eleazer Fletcher Flagg … was born in Conway, 8 Jan. 1800. He went South with his brother Chandler, and Otis Presbrey, afterward his brother-in-law, and traveled from place to place selling merchandise; he seems to have resided permanently in the South after 1823, and eventually bought and cleared a plantation, “Deerfield,” in Caroline Co., Va. Though known to have been uniformly kind to his slaves, he was poisoned by his cook, who put pounded glass in some food. It was afterward ascertained that she had poisoned three previous masters. His wife, who was away for the day at the adjacent plantation of her father, “Poplargrove,” escaped, as also his child William C, who refused to touch the food offered; but he himself died from the effects, 4 Sept. 1831.