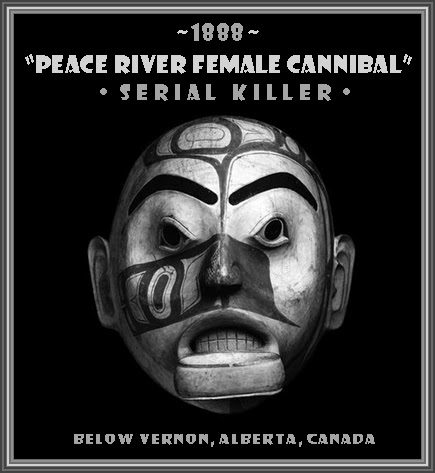 FULL TEXT (Article 1 of 2): Few particulars of the recent cases of cannibalism in the Peace river district are attainable. They occurred in the far northwestern portion of the territories, 200 or 300 miles beyond Edmonton. The Peace river country is inhabited by Cree Indians and half-breeds. Most of them are pagans and still cling closely to the traditions of the Cree nation. They believe that at times evil spirits enter the bodies of members of the tribe, turning them into wehtigos, who kill and devour their families. It is usual when any member of the tribe shows signs of becoming a wehtigo for the members of his or her family to kill the person so addicted.

Last fall a half-breed named Conteraille, assisted by his son, killed his wife because it was believed she was turning wehtigo. The Dominion government sent a detachment of police in to the Peace river district and arrested them, and they are now serving a term for manslaughter in the Stony Mountain penitentiary. Their punishment caused much disaffection among members of the tribe, who contended that if they had not put the woman to death she would have killed her children and eaten them.

The woman who is the cause of the present case of cannibalism turned wehtigo [a person possesses by an evil spirit that devours mankind] some years ago and killed and ate one of her children before she was suspected. Having once tasted human blood she is supposed by the Indians to be endowed with superhuman powers, and they are in such terror of her that no attempts have been made to kill her.

At intervals of four or five months her craving for human blood returns, and while in these fits it is reported she assails the first person she meets. Most of her children have fallen victims, having been slain with an ax. The half-breeds and Indians are in terror, and it is probable a police force will be sent to Peace river to arrest the man eater. FULL TEXT (Article 2 of 2): Edmonton, N. W. T. March 27.— The blood-curdling stories of cannibalism which have reached here during the past few days revive to memory scenes nothing short in brutality of those reported as having occurred in the Fiji islands years ago. The murderous man-eating woman of Peace river, living 500 miles north of Edmonton and 1,700 miles from Winnipeg, the capital of Manitoba, has devoured twelve human beings, her system of killing being by gradual poisoning. How long she has carried on her brutal work to satisfy an inhuman appetite, and how she has accomplished so many deaths, avoiding discovery so long, is a great surprise to the wild Indians of the Peace river region and the few while people scattered here and there throughout this great waste of land to the north of Edmonton. So well has she carried on her terrible work that traces of her awful deeds are scarce, and the woman being hopelessly insane, it is probable that darkness will forever enshroud the dreadful tragedy.

It is learned that the woman has been seized by a hand of Indians and will probably be removed to a Canadian government or Hudson Bay company’s station, if in the meantime she is not killed by her friends, who are threatening her life. Talking to an old Hudson Bay official, your correspondent was assured that dozens of cases of cannibalism had taken place in the North Which had never been brought to light. Of course many Indians have been compelled to eat their own friends from sheer starvation. This officer told of a man named Papniow, who started on a 700-mile trip a few winters ago accompanied by two friends. The dogs took sick, also one of the men, and for several weeks the starving men subsisted on the flesh of their dead comrade. The Indian woman, who is undoubtedly the greatest cannibal ever known in the continent of America, was driven crazy in the first place by medicine men, as they are called. As particulars of the tragedy are only brief, owing to circumstances explained above, a brief history of these men, as learned by your correspondent, will probably be read with interest. They are. designated by several names, as shamans, sorcerers and conjurers.

The Eskimo, among whom this woman was acquainted, call them angekoks, which is wise men. The Indians, like other people, are subjected to the ills of body and mind, and are, therefore, dependent upon medical protection to help them in their hours of pain. Blindness, arising from the smoke of the lodges, uncleanness, the habitual use of paint; and hereditary diseases are very prevalent among the tribe. Sitting in a lodge a short time ago with twelve persons, a missionary named Rev. John McLean, B. A., counted no less than five blind individuals. There are numerous cases of scrofula, consumption, rheumatism, immoral diseases, bronchitis, etc. The medicine men are the priests and doctors of the camp, uniting religion and medicine in their practice. Generally there are grades of distinction, the lower resorting to the use of herbs and other medicines only, the higher relying upon supernatural Influences to aid them with the dispensing of their materia medica. It is of the latter class to whom the cannibal woman went with her ills. Shrewd and intelligent, they are revered by the occupants of the lodges, and become instructors of the youth and the guardians of the sacred legends. Occasionally medicine women are found, generally aged persons, who become famous through the numerous cures wrought by their skill.

“Medicine” has a two-fold meaning, the one referring to the charms and incantations, the supernatural part of the work, and the other to the use of physic, the natural part. In some tribes there exist secret societies and organizations of medicine men, who keep sacredly their medical lore and mysterious rites, thus creating superstitious fears among the people, a would enhancing the value of the services. According to the statement of F. Aosikinaik, a warrior of the Ottawas, there were secret societies among the Ottawas, one of which was called “Wahbahnoowin,” signifying the east. It has been asserted that those who were fully instructed in all the mysteries of this Society could hold a burning coal in their hands or thrust their fingers into boiling water without receiving any injury. They had a very strong preference for the pleasures of the sweat lodge, and were able to endure a greater amount of heat than other persons. Another society named “Medaowin” had several sections, each of which consisted of eight members.

They had secret signs and pass-words which enabled them easily to get rid of their enemies, and to exercise a commanding influence in the tribes, and nothing was positively known of their private meetings, but their public meetings were held in a large wigwam or in the open air, where the people assembled in large numbers to witness the ceremonies. Within the inclosure the members sat, each holding a stuffed bird or animal in his band, which seemed to revive from the sounds uttered as some of the members danced in the open space, or ran about holding a bird or animal in front of them. Placing small bones in the mouths of the animals, they were thrown in the mouths of the persons standing near, and caused in them superstitious fears, believing that the members used some powerful medicine for accomplishing their purpose. It was believed that when an enemy was disposed of, one of the members disguised as a wolf or bear went on the eighth night, dug up the body, cut off one of the little toes, the little fingers, and cut out the heart and tongue. 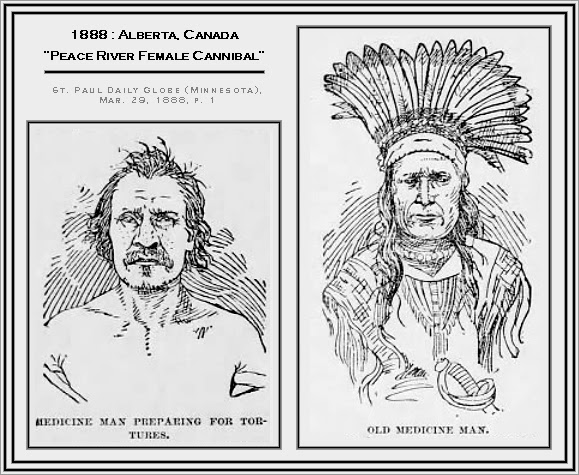 These were taken to the next meeting, where the tongue, being divided into eight shares, was eaten, and the other parts of the body used in the preparation of their medicines. Wherever the secret fraternities of medicine men existed there were initiatory rites which the candidates for the profession had to undergo to lit them for their duties. In some tribes this consisted merely in passing successfully through a period of fasting until the guardian spirit had been found. Some held that from birth a supernatural influence rested upon a person designated for the office, and in due course he entered upon the career marked out for him by the gods.

The Eskimo, among whom the cannibal lived for some time, taught that death and resurrection were necessary in every candidate for the sacred office. A keen intellect and dignified bearing, or a tinge of manners betokening the prophetic vision, were held by others to constitute the necessary qualifications of a candidate. Among the Chinook Indians, near the Rockies, the aspirant for medical honors prepares a feast, which is free to all, and bestows gifts upon the medicine men. A lodge is prepared for him, wherein he fasts three days and nights, while the initiated dance and sing around it during the whole period. The fast ended, he is taken up apparently lifeless, and the ceremony of washing the dead is performed, which implies plunging the candidate into the nearest cold water and rubbing him briskly until he recovers from the effects of his fast. He now rushes into the woods and returns dressed as a medicine man, and then, relying upon the dignity of his profession and the influence attending it for his support, with his medicine rattle in his hand, he collects all his property and divides it among his friends. The singing and dancing are kept up during the distribution, after which the ceremony of initiation ends with a general feast. Among the Crees, who live in Manitoba principally, there are four grades leading to the highest position.

The first grade is “Wapunoo,” conjuror of the morning, the members of which have the power of extinguishing fire; the second is “Nutao,” the man who uses the bone or shell in killing, and the “birdskins,” who has an extensive knowledge of healing remedies and possessing mesmeric powers; the third is “Kesikowejinew, the man of the day,” who is the revealer of secrets, and the fourth is called “Tipiskoweyinew,” who has the power to nullify the evil influence of the Mitav, and even to heal those who have been affected by him.

The initiatory rites among the Cree Indians consist in physical torture to test the power of endurance, this being a necessity in the professionals the novitiate will be prepared for stolidly witnessing sufferings in others, and a fast of ten days’ duration. The candidate’s first degree is obtained by undergoing this period of fasting, in accordance with the custom of the medical brotherhood. The candidate goes to a lonely spot and takes up his residence in the branches of a tree, where he fasts and meditates, holding converse with the spirits who visit him now and again and become his guardians and friends through life. The great Evil Spirit visits him and takes him under his care, and the lesser spirits that abound in the animals and in all the wonderful things of nature become his servants. The dress of these medicine men is generally .the most hideous and grotesque that can be conceived. The skin of a bear, or other wild animal, is wrapped around the body, encircling the limbs, the claws reaching to the tips of the fingers arid the head being so closely fastened that a part only of the hideously-painted face is seen. It is expected that the medicine men who are said to have injured the woman’s reason will be arrested and prosecuted by the British authorities.