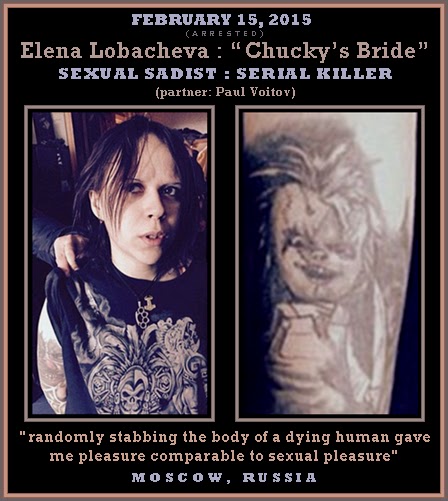 A serial killer couple was placed under arrest in Moscow on February 20, 2015.

Their last attack, on a janitor, occurred on February 15, but the victim, a street cleaner,  was able to escape the murder attempt by fending the killers off with a screwdriver. He suffered knife wounds and found his way to a hospital where he was placed in an intensive care unit. He was able to give police a good description of the couple, which led to their arrest.

The press had been aware for some time that the unidentified couple had been targeting homeless men and had nicknamed them “The Cleaners.” All of the victims were killed by a large number of knife stabs. It turned out there were five in the gang, all of them male but Elena.

Beginning in July 2014, Elena Lobacheva (Елены Лобачёвой), 25, and Paul Voitov, 20, (according to police allegations) murdered 2 women and 12 men in Moscow, all homeless, with one exception -- Sergei Yevseyev, a middle-class bank employee. The male partner, Paul Voitov, claimed their motivation was to “clean up” the city by killing alcoholic homeless men. Russian media nicknamed Elena “Chucky’s Bride.”

Elena Lobacheva is a sexual sadist, with her 20-year-old male accomplice, whose alternative sexuality preference involved stabbing 12 men (up to 107 times), all strangers, randomly selected, to death, and photographing them “with their stomachs cut open.” She was, as she claimed,  inspired to become a murderess by the movie “Bride of Chucky,” and has a tattoo of the Chucky character on her arm.

English language news sources broke the story of the arrest on February 24 and announced Elena’s shocking confession regarding her sexual perversion on February 27.

Olga Lobacheva, mother of the confessed female serial killer, has announced, in essence, that her daughter is a nice girl who wouldn’t hurt a fly. 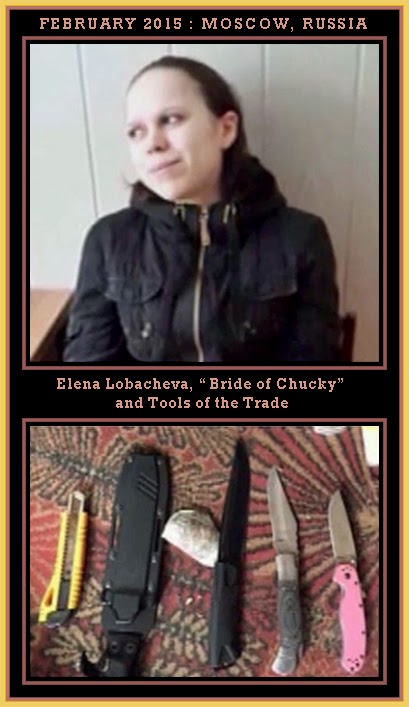 ***
Following is the Wikipedia article on The Cleaners

Wikipedia: Pavel Voitov, Elena Lobacheva, Artur "Narcis" Narcissov, Maxim "Zakirka" Pavlov and Vladislav "Persik" Karataev are a gang of Russian serial killers and neo-Nazis. Between 2014 and 2015, they killed more than 15 people in Moscow, the Moscow Oblast and the Yaroslavl Oblast. Their victims of choice were mainly homeless and suffered from alcohol abuse issues. Many attacks were filmed and posted on the darknet and on the VK page "OBO16". They called themselves Sanitater-88 (88 meaning HH in the alphabet, short for "Heil Hitler").

The young people met in far-right groups in VKontakte. The leading role among the participants was taken by Pavel Voitov: he distributed roles, made decisions and actively led the activities of the gang. The motives for the killings was the desire to "clean the city", and "hatred of alcoholics and homeless people". According to the investigators, they wanted to "oppose themselves to others and show their superiority".

They committed murders with particular cruelty in different parts of Moscow from July 2014 and February 2015. Victims were found not far from the Belorussky railway tracks, sometimes in the Eastern Administrative District. The corpses were subsequently found in deserted places, where there are no surveillance cameras (under bridges, near fences, garages, in abandoned hangars or on far-away glades in forest parks):

In the fall of 2014, operatives paid attention to a similar style of murders in different parts of the city: victims were tricked into visiting scarcely populated or deserted areas, mostly at night, then hit with a hammer first and struck with dozens of knives afterwards, the victims usually being heavily drunk or homeless, sometimes guest workers. Suspecting that all the crimes were committed by the same people, the investigators combined them into one case. But the investigation had no serious clues for a long time. Suspicion fell on supporters of Nazi ideology, and relevant groups in social networks were actively studied, but no trace of crimes in the virtual space could be found.

Subsequently, employees of the Main Department of the Sledkom and FSB were able to track the mobile phones in the areas where the killings occurred. Several of the same numbers "fought" on communication towers near the crime scenes. Having researched the owners of the numbers, the FSB officers calculated the suspects. On February 15, 2015, Pavel Voitov and Artur Narcissov attacked a janitor in Vykhino, but he actively resisted. The criminals were forced to flee, and the janitor was able to testify and describe them.

As a result, on February 19, 2015, the police, together with the FSB, detained 20-year-old Pavel Voitov and 25-year-old Elena Lobacheva—their place of residence was calculated from video cameras installed around the city. During the searches, six knives, an unregistered "Osa" pistol, clothes with the janitor's blood and a hammer were found inside their home. After some time, the police arrested two other suspects—19-year-old Maxim Pavlov and 21-year-old Vladislav Karataev. A little later, 23-year-old Artur Narcissov was also detained. The detainees confessed at the first interrogation, including to the killings, even though the authorities hadn't suspected them of the murders.

The investigation of the "Cleaners" criminal case ended in April 2017, after which the criminals were transferred to the Moscow City Court. Elena Lobacheva demanded that the jury convicted them, and this request was fulfilled. From late May to mid-June 2017, the prosecutor read out the evidence of the prosecution in court. Analyzing each episode, he showed the jury photos from the murders. At the first sessions, some jurors turned away from the photographs, but until the end of the process they had to see hundreds of photos. For the entirety of the trial, only Lobacheva's mother came to visit from any of the defendants' relatives.

On June 21, 2017, the jury found all five defendants in the case guilty and undeserving of leniency. The exception was Narcissov, whom the board unanimously found guilty of attempted murder, but was divided on the issue of leniency—6 were in favor and 6 were against.

According to the accusation, Pavel Voitov committed 14 murders: five on his own, six with Lobacheva, five with Lobacheva only observing, two together with Karataev and Lobacheva, and two with Pavlov. Voitov and Narcissov committed an attempted murder. Pavlov, Karataev and Voitov also robbed two people, with one of the attacks resulting in Voitov killing the victim.

Two members of the gang, Lobacheva and Narcissov, lived in Moscow. Elena Lobacheva had grown up on the outskirts of Moscow near the Vykhno metro station, and after school she worked first as a courier, then as an assistant accountant. Before the murders she had had a suspended sentence for a series of thefts. Artur Narcissov worked in a warehouse, also as a courier. Vladislav Karataev was born and lived in Pavlovo, 70 kilometres away from Nizhny Novgorod, with his father raising him. He previously had resided in a psychiatric hospital and had taken medication. The youngest of the "Cleaners", Maxim Pavlov, who at the time of the crimes was only 16, lived in Rostov, Yaroslavl Oblast.

The leader of the gang Pavel Voitov was registered with his grandmother—a war veteran—in the Ruza District of the Moscow Oblast. During the investigation, Voitov claimed that he lived through robbing people, stealing mobile phones from passers-by. But the numerous cases listed by him, with the exception of one, were not confirmed, or at least there were not reports to the police from the victims. From five to thirteen years old, he lived with his parents on Izmailovsky Boulevard, then, after his parents divorced, he spent some time in Riga with his father, where in 2012 he was sentenced to a year of imprisonment for the desecration of graves at a Jewish cemetery. He wanted to be a soldier, so, together with Karataev and Pavlov, he tried to go to war against the rebels in the nationalist battalion "Azov", but all three were instead deployed on the Russian-Ukrainian border, and then returned home to Moscow by bus.

All of the members led a healthy lifestyle, and did not drink anything stronger than beer.
Subsequent psychological examinations determined that all of the "Cleaners" were sane, with the exception of Karataev, who was recognized as partially sane.

EXCERPTS from other sources:

Lobacheva confessed to being involved in seven of the murders and her accomplice Pavel Voitov, 22, said he took part in 14 of the killings.

When her flat was searched, police found five knives and on her computer a "step-by-step instruction to killing people and photos of all of her victims with their stomachs cut open and body parts cut off". Folders titled "Tenderness" and "Need this" contained hundreds pictures and video recordings of torture and executions. In a notebook she had recorded the number of knife wounds on the gang's victims' bodies. A female friend of Lobacheva, called Anastasia Soldatova, said: "We often discussed beauty of death with Lena. "Voitov and Lobacheva were keen on serial killers, they spoke a lot about maniac (Pichushkin) who was like an icon for them. They wanted to be like him." Pichushkin wanted to kill one person for each of the 64 squares on a chess board.

Elena Lobacheva is not the first female serial killer to demonstrate classic sadistic sexual proclivities. Many female serial killers throughout history were known to have experienced pleasure witnessing the intensely painful slow deaths of their victims through poisoning. The specific knowledge of orgasmic pleasure has rarely been recorded not because it is necessarily uncommon, but for the simple fact that such information would not be made available other than through a direct confession of the murderess. Additionally, since female sexual perversion in relation to homicide has received little attention from criminologists and psychologists, resulting in ignorance and still-prevailing false stereotypes. Dr. Deboarah Schurman-Kauflin is one of the rare scholars to take this matter seriously to study it closely.

Nevertheless, some cases where female serial killers are known to have experienced sexual ecstasy from participating in murders are Elizabeth Bathory (1610, Hungary), Jane Toppan (1901, USA) and an anonymous case we at UHoM have dubbed the “Southern Stripper Female Serial Killer” (1990s, USA). Toppan’s case is particularly well-documented (see the classic true-crime book: Harold Schechter, Fatal: The Poisonous Life of a Female Serial Killer, 2002).

Another important aspect of the Lobacheva case is the collecting of “relics” of her crimes, in the form of photos reportedly showing her victims “with their stomachs cut open.” Another recent case features a similar use of photos as serial killer “relics,” that of prolific Italian serial killer nurse, Daniela Poggiali, who would make “selfies” posing with the corpses of the patients executed. 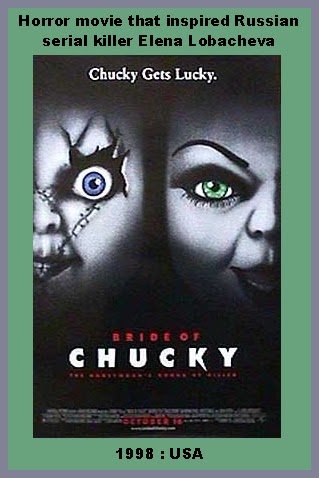 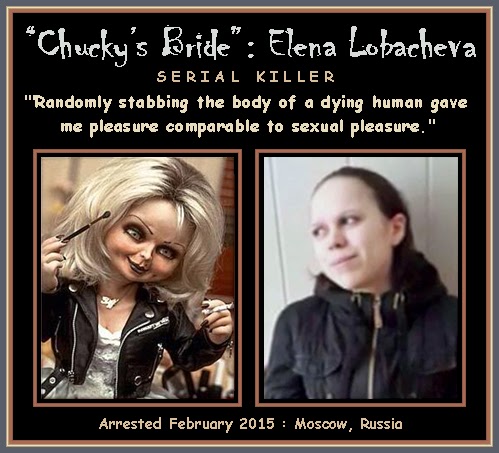 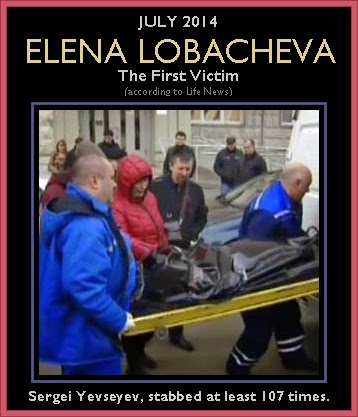 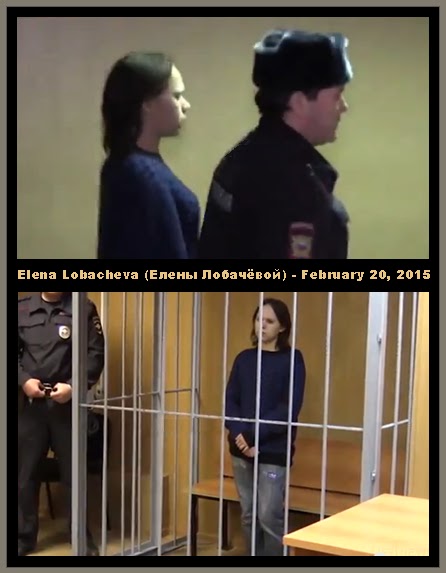 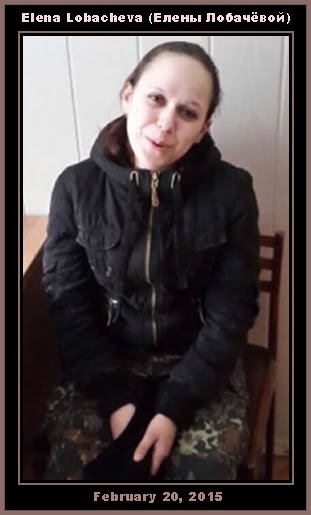 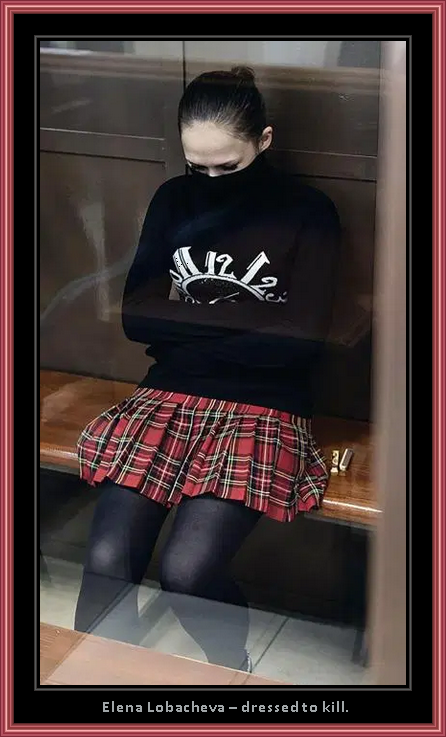 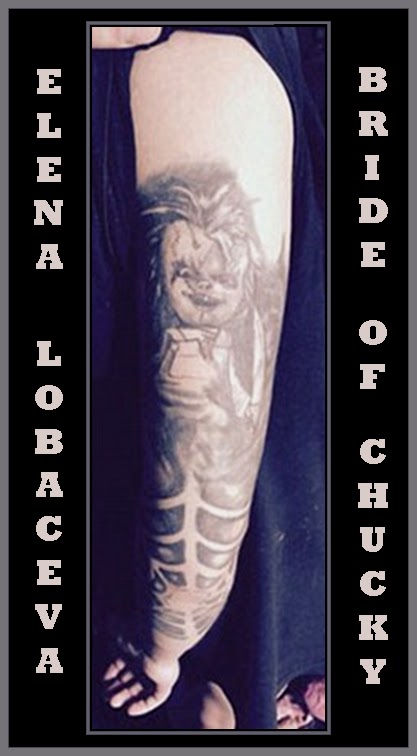 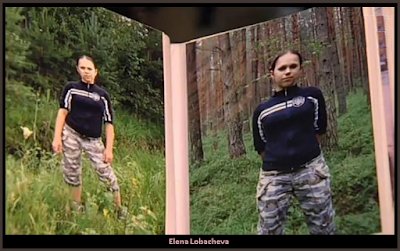 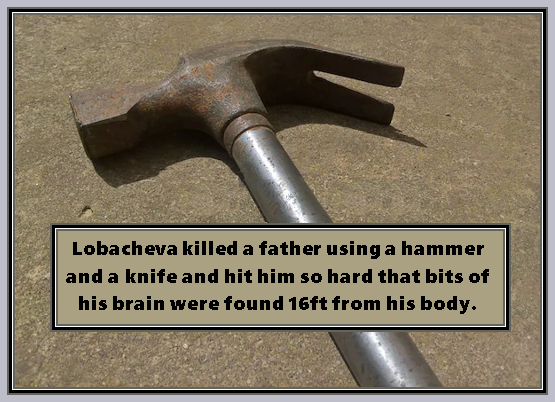