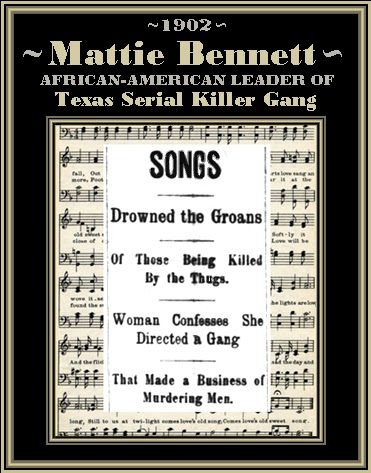 Note: This is a particularly confusing case.

FULL TEXT (Article 1 of 4): Beaumont, Texas, March 12. – Mattie Bennett, in jail on a charge of having murdered one of five men who have been found in the Neches River, has confessed to Sheriff Landry that she was the head of an organized band of negro women and white men who lured, drugged, beat and robbed many men.

She has not confessed to any complicity in direct murder, but the officers believe that she will within a short time confess to the murder of Ben Pearson, and perhaps to that of others.

It begins to be the general impression that 20 or more strangers have been reported missing after they had reached Beaumont have been the victims of Mattie Bennet’s gang, and that their battered bodies are now lying at the bottom of the Neches River, weighted down so that they cannot rise.

From the confession made by the woman the officers have learned that the plans of the gang were peculiarly atrocious. The victim would be spotted by one of the white men and then lured inside the Bennett shanty, a hovel-like affair, out behind the line of Sabine street, by one of the negro women.

After he had been led into the house he would drugged with knock-out drops. If that was not sufficient some white men were at hand to beat  him into complete unconsciousness. Then he was robbed. If he proved to be dead he was dragged or carted to the river and thrown into it, after being weighted. If he was only unconscious he was dragged to some secluded part of the street and left there for passers to pick up. The confession of the woman led to the arrest of two of her alleged accomplice. They are all closely guarded by the officers.

But the Sheriff gives out the statement that only the woman has been closely questioned. From her, he says, it has been learned that songs were frequently used to drown the groans of victims, so that pedestrians would not be attracted to the house.

The particular part that the white man. Punch Prim, now under arrest, is alleged to have played in the wholesale outrages is not yet given out by the Sheriff. He declares that he will not be able to give out any further details until he has succeeded in finding perhaps a dozen other white men, some of them accused of being accomplices in the crimes, and others wanted as witnesses.

“There were sometimes two and sometimes three woman and six or seven men in the gang,” says the Sheriff. “We have found all of the women and know where about half of the men are, but some of them are going to be hard to get. We also want to get as many of the living victims of the outrages as witnesses as possible. There is one man here, or near here, who was robbed of $80 and dragged into the street, where he was found unconscious the next morning. We want to get hold of him, and there at least 12 other cases that we know of.”

It is this opinion of the Sheriff that at least four of the five bodies that have been found in the Neches River were thrown there after knock-out drops at the Bennet house had caused murders.

There was a report to-day that the Sheriff’s deputies were after the back driver or expressman who had carted the bodies to the river and helped dump them in. But that is denied. He declared that so far he has secured no trace of the vehicle that was used, although he is still looking for it. While there is much interest, that is growing steadily into excitement, there has not yet been any talk of mob violence. The Sheriff’s fiends, however, declare that he has taken especial care to thwart any such attempt, should it be made. No date for the preliminary examination of persons under arrest has yet been set.

[“Songs Drowned the Groans Of Those Being Killed By the Thugs. – Woman Confesses She Directed a Gang That Made a Business of Murdering Men. – Bodies Were Dumped Into the River. – Twenty Deaths Attributed To the Criminals. – Sheriff of Beaumont Has Made a Number of Arrests and Has Other People Under Surveillance.” The Cincinnati Enquirer (Oh.), Mar. 13, 1902, p. 1]

FULL TEXT (Article 2 of 4): Beaumont, Texas, March 15 – A body identified by a painter’s union card as that of V. R. MacNamara was found in the river this morning. It is supposed to be one of the sixty victims of the Mattie Bennet gang. The head was badly crushed and had been in the water three weeks. His home is at Shreveport.

FULL TEXT (Article 3 of 4): Beaumont, Tex., March 15 – Another chapter was added to-day to the serial story of the crime that has been disclosed by the Neches River during the last two months. A negro fisherman, who was looking after some lines he had set in the river, to-day found the body of a man floating near the site of the Beaumont Ice, Light and Refrigerating Company’s plant, Justice Brown and Undertaker Beard were notified, and the body was removed to the undertaker’s, where a crowd soon gathered to view the remains.

Five bodies have been taken from the river during the last two months, and the skull of each bore the marks of a violent blow. Everybody wondered whether the body found this morning would bear the same marks, and when Justice Brown, assisted by Doctor Gober, examined the corpse and stated that death had been caused by blows in the head, one of which left its mark plainly visible in the right temple and the other breaking the left jaw, people wondered where this business of murdering people and throwing them into the river was to stop.

By a card found in a pocket of the clothing worn by the corpse it was learned that the dead man’s name was W. R. McNamara, a painter. The card was issued by the local painter’s union, showing McNamara to have been a member of that organization. he came to Beaumont about six months ago from Shreveport, La., and has been working here most of the time since. He had been drinking considerably of late and was known to have had little oir no money. Hence, if the motive of the murder was robbery, those who did the deed were doubtless disappointed. McNamara has been missed from the Wynche boarding-house since the night of February 26, four nights after Ben Pearson, another of the river victims, disappeared.

The similar circumstances surrounding the case of each of the six river victims, backed up by the confession of Mattie Bennett, the negro woman who tells Sheriff Landry that her house been the rendezvous for six months og a gang of ropbbers and murderers, leads inevitably to the conclusion that it is all the work of Mattie Bennett’s gang of white men and negro women.

Acting on information given him by the acknowledged leader of the gang, Sheriff Landry, who had previously arrested the negro woman known as “Mary Jane” and Punch Prim and Jack Welsh, white men, to-day placed Joe Hood in jail. He had been a fellow-employee with Ben Pearson., and he seemed to take great interest in the case. He left town, however, and was arrested at Slisbo. He asked the officer who arrested him if Mattie Bennett “had been telling anything” on him. In the jail Hood admitted that he knew Mattie Bennett and that he had seen Pearson at 10 o’clock the night he was murdered.

The series of crimes, disclosed by the finding of the six bodies in the Neches Rover and the confession of Mattie Bennett that robbery and murder had been committed in her house, have stirred the people deeply, and they are demanding a thorough sifting of the murders. The officers are doing all possible to get the guilty ones behind the bars, and Sheriff Landry declares that he will have some additional news of a startling nature to disclose within a few days.

The police fear that the twelve or more men who have recently been reported as “missing” have been murdered and their bodies are now at the bottom of the river.

[“Another Victim Of Beaumont Gangs – Discovery of a Sixth Body in Neches River Causes Excitement. – Corpse of Missing Painter. – Marks Similar To Those on Other Bodies – Police Believe Twelve Missing Persons Were Murdered.” The St. Louis Republic (Mo.), Mar. 16, 1902, p. 1]

FULL TEXT (Article 4 of 4): Beaumont, Tex., Aug. 29. – The discovery in the Neches river within the past few days of the bodies of two men has revived the stories of the operations of the supposed gang that vwas accused of the robbery and murder of various men, whose bodies were found in the river last March. Seven bodies were found in almost of the same place and under almost identical circumstances within two months, and as a result of discoveries made by officers, Mattie Bennett, a half-breed Indian [earlier reports describe her as “negro”], was arrested with another woman and a half dozen men. The Bennet woman made the most damaging confessions of robbery and debauchery, and of everything short of actual murder. She talked freely and gave the names of the negro woman and the white men who, she said, were her confederates.

But for some reason – a reason that has never been made public – none of those arrested and held in jail for so long a time was even brought to trial. Mattie Bennet’s confessions did not impress the Grand Jury sufficiently to cause it to return indictments, and the woman and all of her alleged “gang” were permitted to go free without punishment of any kind.

In some respects the circumstances of the finding of the two bodies discovered within the last few days are similar to those of the supposed victims of the Sabine street gang. They were found near the same place where the other bodies and one of them – that of the Mexican – bore the mark of a blow over the eye. The body that was identified as that of Jim Broderick had a bad bruise back of the ear.

Officers do not believe that either Broderick or the Mexican was murdered. They think, rather, that both fell from the Southern Pacific bridge in attempting to cross it.