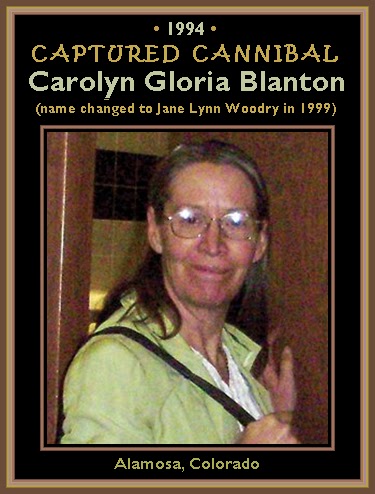 In January 1994 pieces of the body of Peter Michael Green, 51, who had been reported missing in late 1993, were found in cookware, in other containers pickled body parts were found, were found in the Alamosa, Colorado, apartment of his 41-year-old girlfriend, Carolyn Gloria Blanton (AKA Jane Lynn Woodry). Other body parts were in other locations: the head was found in “a remote area.” Mr. Green’s torso was discovered in his own home. Outside, a trash bin contained his legs.

Sheriff’s Captain Les Sharff testified later in court that: “The flesh and the meat were off the legs. They had been totally cut away from the bones themselves, from the ankle up.”

Among the the evidence exhibits accepted into evidence during the the trial were a pot, a bowl and a spoon, each which had been found in Ms. Blanton’s home containing bite-size chunks from the boyfriend’s corpse. Plus a .25 caliber pistol. It was determined she had shot him four times before starting in on the carving and cooking.

She was found not guilty by reason of insanity and committed to the Colorado Mental Health Institute in Pueblo, an institute for the criminally insane, where she remained until 2005.

“I want people to know that the community is safe,” Woodry said to a reporter. “I am not a danger to the community.”

Woodry’s attorney, Bill Martinez, quoted Woodry as saying, “I’m deeply ashamed. The person who killed Peter Green is not me.”

At the end of a two-hour hearing which took place at Alamosa on April 9, 2005, Carolyn Gloria Blanton / Jane Lynn Woodry, the court decided to release her on conditional release. Her treating psychiatrist Elissa Ball, who had worked with the patient for ten years, testified that the cannibal killer could now tell right from wrong and was unlikely to do anything violent if she accepts semi-monthly injections of twice-monthly injections of Risperdal Consta.

Other conditions for release included a requirement for employment, attending Alcoholics Anonymous meetings, and keeping a diary which would be monitored. Any romantic interests would also, by order of the court, be closely watched. 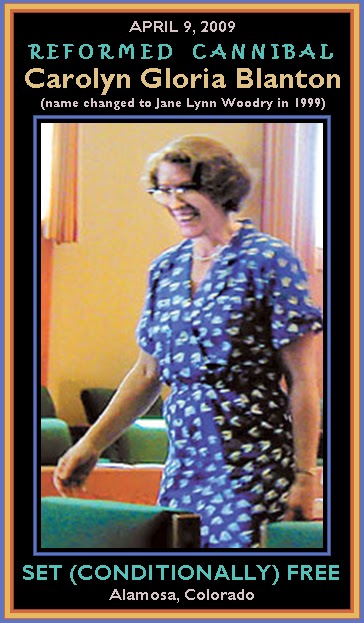