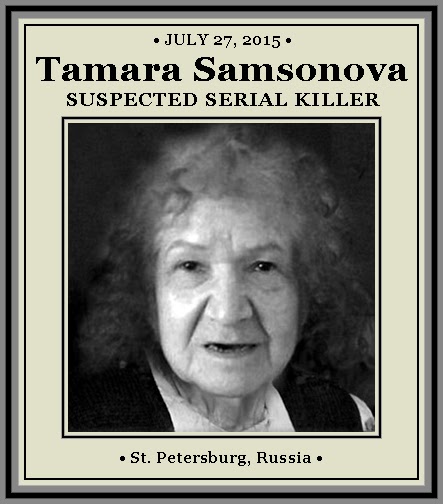 Tamara Samsonova, 68, was arrested in St. Petersburg, Russia July 27, 2015 after her image was captured on a closed circuit security camera dragging a bag suspected of containing human body parts. The remains were presumed to be those of 79-year-old Valentina Ulanova, a paralytic  who Samsanova was the caretaker for. Ulanova’s headless body was found near a pond on Dimitrova Street in St. Petersburg.

In one of the clips from the CCTV footage, Samsonova is seen carrying a saucepan downstairs and exiting the building where the victim lived, located a few blocks from her fiend, and killer. The saucepan contained the head of Valentina.

RT News reports that: “First the upper torso, missing the head and one hand, was found wrapped in a shower curtain. Shortly afterwards a plastic bag with hips and thighs was discovered. The body had been cut into eight pieces.

Samsonova, who had recently been in a hospital receiving mental health treatment, confessed, telling police she had gotten tired of her companion. The 79-year-old had offended her, Samsonova said, for having failed to wash out the tea cups.

Police discovered diaries written by Samsonova which included entries in three languages (Russian, German English) detailing eleven dismemberment murders that took place over a span of then years. These volumes were among books on black magic and astrology. The press dubbed her the “Granny Ripper.” Others have given her the moniker of the ogress of Russian, folklore, Babushka Yaga (“Baba Yaga”).

A ‘book of spells’ with missing pages belonging to Samsonova was found by the police. Pages from the same book were found in packages containing the dismembered the remains of the 2003 murder victim.

A number of unsolved murder cases – in which victims had been dismembered, with body parts in bags found across the city – are being reinvestigated by police. The diaries are being used in attempt to match the detailed descriptions to the evidence on file. The total number of possible murders, based on the diary plus the evidence, is 13.

2003 – Male tenant, 44-year-old native of  Norilsk; his headless, armless and legless was found on Dimitrova Street.

2005 – Samsonova reported her husband missing in 2005. He was never found. It is suspected she murdered him. A neighbor named Maria, interviewed by reporters, told how she once asked Samsonova about the absence of her husband and was answered with: “Oh, it's very sad - he just left and disappeared.”

Samsonova confessed to murdering and dismembering another tenant (English language news reports don’t mention the year). Bags of remains were found around Frunzensky district of the city. Police say that Samsonova would drug her victims to immobilize them before murdering them.

After the arrest, police found blood spots in her bathroom, a saw and a knife they suspect she used to cut up the corpses of her victims.

Samsonova lied to police about her background, claiming she was a retired actress and a graduate of the Vaganov Ballet Academy, when in fact she was a former Soviet “monitor” who surveilled hotel guests at the Grand Hotel Europe, which was once regarded the most luxurious hotels in the world.

The description of Samsonova’s job “monitoring” hotel guests describes what in the Soviet era was a KGB-employed prostitute. Prostitution was illegal in the Soviet era, yet prostitutes were used by the KGB as informants, assigned to hotels to collect information on foreign guests.

On August 5, 2015 the sensational news that Samsonova may cannibalized her victims appeared in the international media. Police are giving out little about their ongoing investigation, but reports are that the woman had cut out the lungs of those she murdered and consumed the organs.

The information was given by unidentified sources in Russia’s Investigative Committee (equivalent of USA’s FBI). Forensic reports indicate that internal organs, in particular lungs, were removed from victims’ bodies.

Another sensational piece of the story is the allegation that her final victim, 79-year-old Valentina Ulanova, was still living (but drugged) when her friend and caretaker began to use a hacksaw to cut her to pieces.

Several quotations from the diaries were given to the press. Referring to a tenant to whom she had rented a spare room, she wrote: “I killed my tenant Volodya, cut him to pieces in the bathroom with a knife, put the pieces of his body in plastic bags and threw them away.”

When Samsonova appeared in court in the opening week of August, 2015 to face the first charges to be made against her, the murder of her friend Ulanova, the prisoner declared to Judge Roman Chebotaryov:

“I was getting ready for this court action for dozens of years. It was all done deliberately. With this last murder I closed the chapter.”

He replied: “I am asked to arrest you. What do you think?”

Her answer was: “You decide, your honor. I am guilty and I deserve a punishment.”

Investigators are now considering the number of Samsonova’s possible victims to be as many as 24.

Officials have stated that Samsonova whas been obsessed with the history of Russian male serial killer “Chikalito,” a cannibal who, over a period of 12 years murdered at least 52, mostl;y (or all?) woman. Marina Krivenko, a neighbor who has known Samonova for 15 years told news reporters that her friend was “very interested in maniac Chikatilo” and had “gathered information about him and how he committed his murders.”

[This article will continue to be updated as new information comes in.] 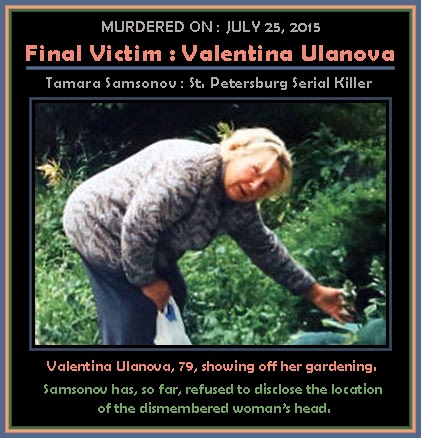 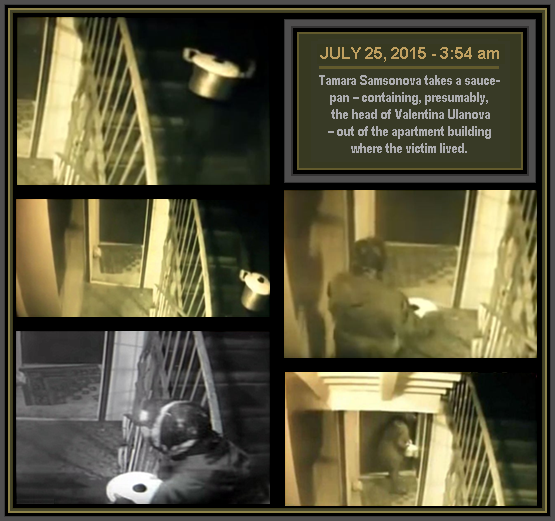 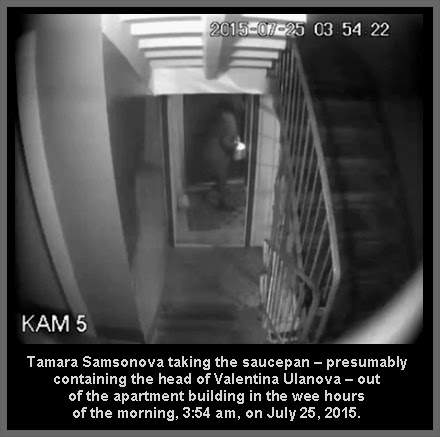 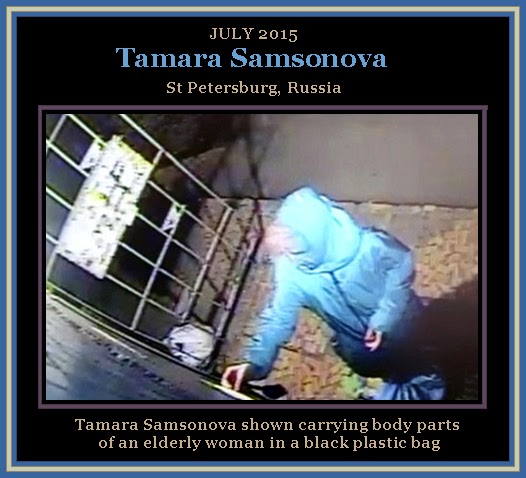 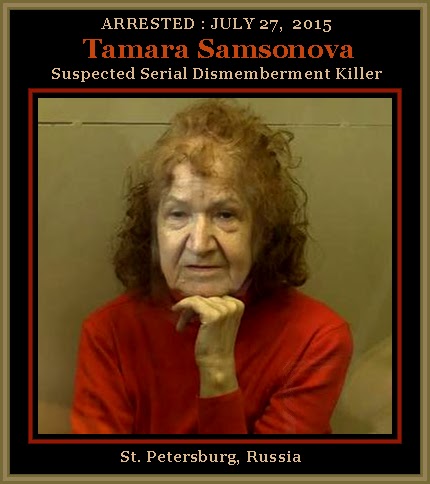 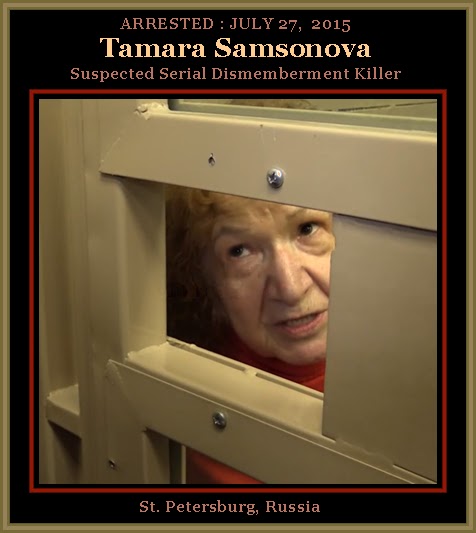 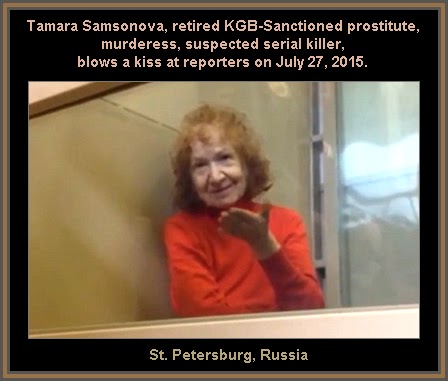 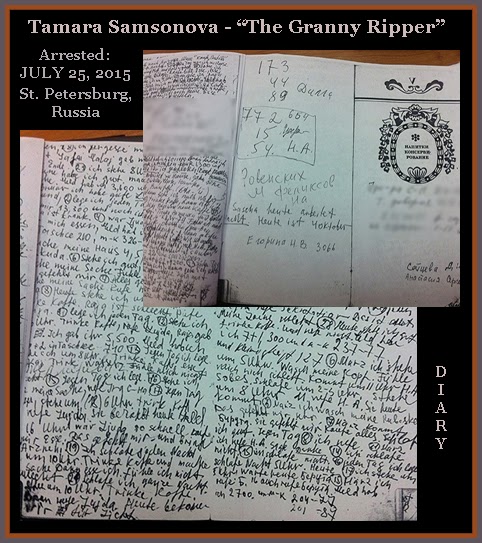 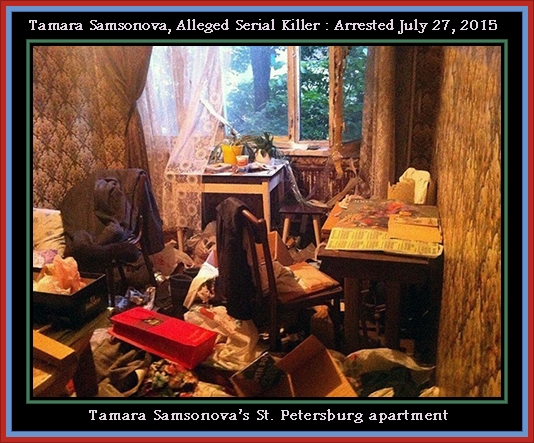 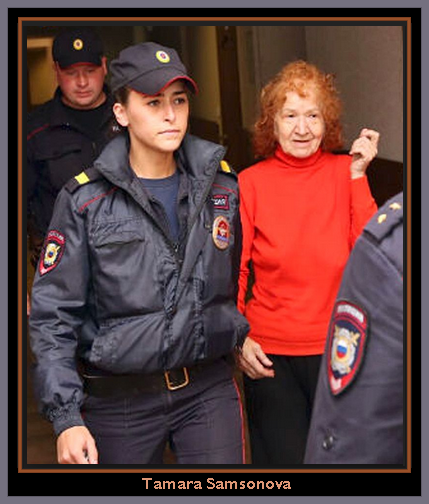 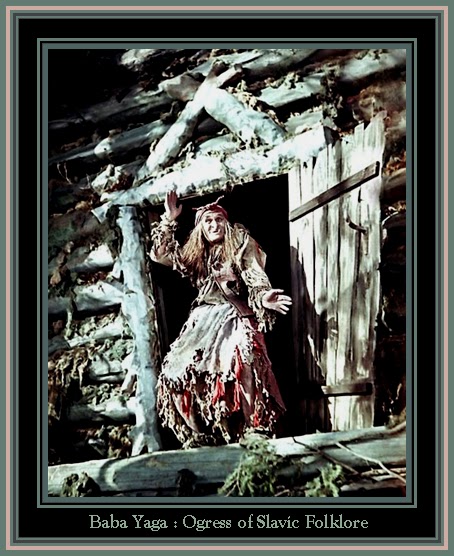 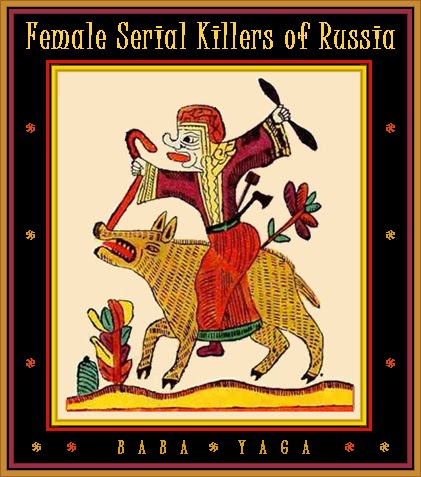