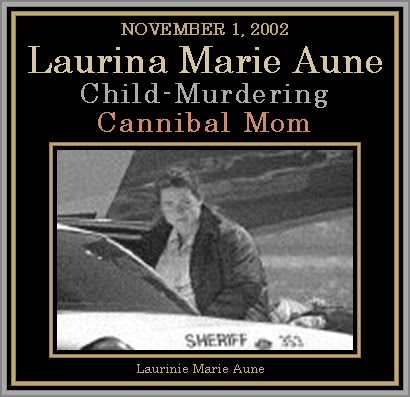 “I don’t know. I felt compelled to do it. I didn’t want to forget her ever.”

These are the words said by Laurina Marie Aune, 26, to Justice James Taylor of the British Columbia Supreme Court on July 20, 2003. Ms. Aune was telling the court why, 8 months earlier, on November 1, 2002 in the B. C. town of Nanaimo, she slit two-year-old daughter’s throat, dismembered the child’s corpse and, with other ingredients, made Kyla’s remains, most of them, into a soup – which the mother consumed.

Ms. Aune did not cook Kyla’s head; she kept that in her bedroom. She did cook the heart and ate a portion of it because, as she told police, “because she felt that’s where her child’s spirit was.”

Few news reports on this case are currently available online and the few that are available are scanty.

Laurina was a “single mom.” Since, in recent decades journalists, seldom bother to mention fathers in reports on children involved in crime stories (unless that father is a perpetrator) it is unclear whether the man Sandra McCulloch of CamWest News describes as Laurina Aune’s “former boyfriend, Scott May” was little Kyla’s father.

In any case, it was Mr. May who had reported the girl missing, leading to the investigation which revealed the crime. At some point (news reports are vague) Mr. May told social workers that Ms. Aune was “unstable,” describing the bizarre assertions thew woman made regarding Kyla’s parentage, claiming that the little girl had “three different fathers and they kept changing bodies.”

Six weeks before her death, Scott had taken Kyla out for Halloween. That was the last time he saw her.

In June 2003, the court remanded Ms. Aune to the Forensic Psychiatric Institute in Port Coquitlam. A disposition hearing was scheduled to take place no later than September 2013.

According to journalist Sandra McCulloch Laurine Aune “suffers from schizophrenia,” yet the news article relating this does not indicate what party may have made such an assessment. In Justice James Taylor’s July 20, 2003 ruling he found that Ms. Aune was not “criminally responsible” for her deed and was unaware that the act was “morally wrong” due to mental illness. Testimony revealed she began having delusions (“hearing voices”) beginning at the age of 12.

Family members, in the course of the investigation were asked why they never suspected that Ms. Aune was insane. They responded to such questions by saying: “That’s Laurina.” 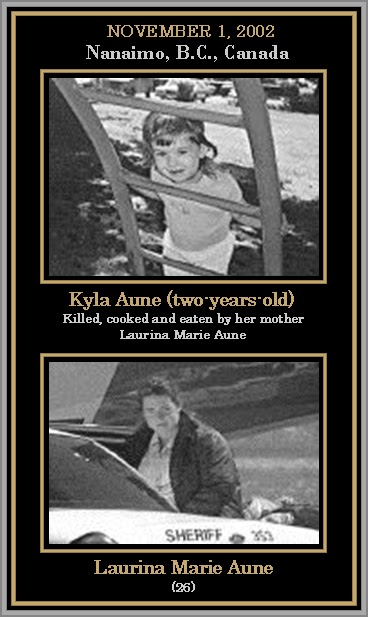