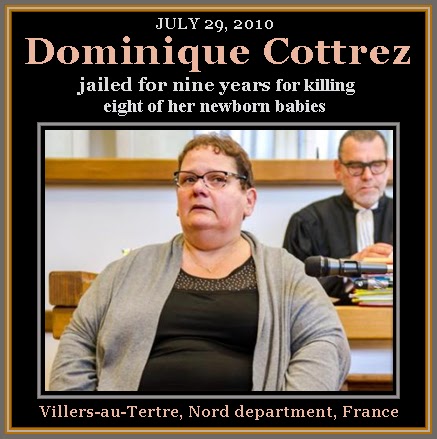 VILLIERS-AU-TERRE, FRANCE: On July 2, 2015, Dominique Cottrez, a 51, French former health worker, was, after years of legal delays, convicted of murdering 8 newborns. Despite prosecutors’ request for an 18 year sentence the jury recommended only 9 years of prison for the killer mom.

It was on July 24, 2010 that new buyers of the former home of Dominique’s parents in Villers-au-Tertre in the north of France near the Belgian border, discovered the skeletons of two babies in the garden. Mme. Cottrez was arrested and confessed. She agreed to show police the location of 6 more tiny corpses of babies she had smothered to death. They were stored in a fuel storage tank, in plastic bags, in the garage of her own home in the same village. The killings occurred from 1989 through 2000 in the village with a population of 655. In most of the killings she suffocated the baby in the bathroom.

Daughter Virginie, 21, told reporters at  La Voix du Nord (on July 29, 2010): “It’s incomprehensible.” We never noticed anything. She had moments of fatigue, it's true, but she was working almost 24 hours a day. She would wake up early for her work as a nurse's home aid, and when she would return home, she had her housework.”

After her arrest, Dominique confessed and told police she was the victim of rape, by her own father, who died three years earlier in 2007. In her tale she said the first rape occurred when she was only 8 year old and continued into her teens. She claimed that as an adult she the entered a voluntary incestuous with her father that continued after her marriage. She “she was in love with her father more than with her husband.”

Five years later, on June 29, 2015 while in court she admitted that the incest story was a fabrication. DNA evidence confirmed that her husband was the father of each of the deceased children.

She was already obese when, in 2000, she gave birth for the first time. Her weight when pregnan was given as around 130 kg (286 lbs). It was a difficult delivery. Lawyers attempted to blame Ms. Cottrez’s murderous proclivities by arguing that the midwife who attended her at that first birth had hurt her feelings by pointing out her unhealthy condition of obesity.

At first she asserted her husband had no knowledge of the pregnancies. Years later, as the process dragged on she changed her story on this point and claimed her husband had been aware, despite the obesity that succeeded in hiding the pregnancy from the two daughters whom she had allowed to live as well as, neighbors, nurse colleagues and the doctors at a nearby hospital.

Trial at the Douai Assize court opened June 25, 2015, closing on July 2. After five hours of deliberation the jury found her guilty of all counts, but recommended a reduced sentence based on the view that the defendant had “impaired judgment.” Prosecutors requested an 18-year sentence but the jury set the sentence at 9 years. 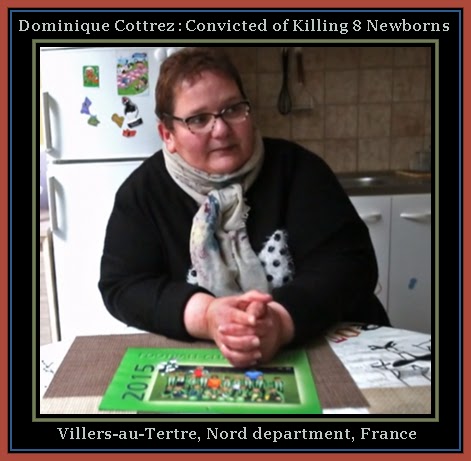 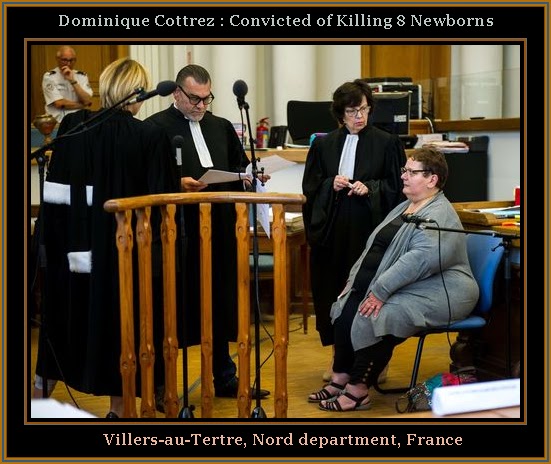