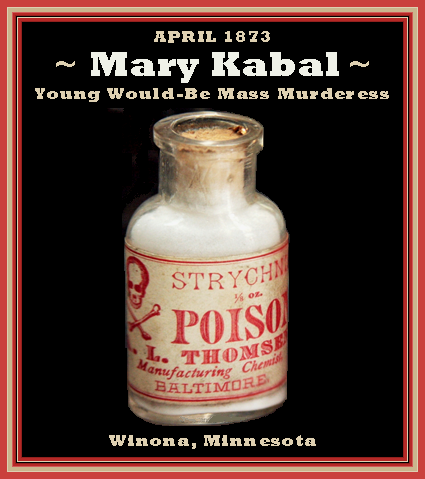 FULL TEXT: A little Bohemian girl named Mary Kabal, age not given, was arrested Monday last at Winona, Minn., on the charge of attempting to poison the household of a Mr. Robert Duncan, Superintendent of the County Poor Farm, about five miles from Winona. The girl was a member of the family, and the poison, strychnine, is alleged to have been put by her into the milk with which the breakfast coffee was drunk. There were seven of the family at the breakfast table, consisting of Mr. Duncan, his wife, son, and father, Mrs. Duncan’s son, a young man named Perry, a hired girl, and the little girl Mary Kabal, who was smart enough to put coffee to her lips without tasting it. The strychnine was kept in a bottle, as a few days ago the girl questioned Mrs. Duncan about it, asking what it was. Mrs. Duncan did not tell her what it was, and it was not known how the girl became aware of its destructive properties. The prompt arrival of physicians saved the lives of the family, and the girl was taken into custody and lodged in the county jail.

FULL TEXT: Mary Kabal, the young Bohemian girl, who attempted to poison “all hands” at the poor farm, a few weeks ago, has been taken to the Reform School. She requires very careful and vigorous discipline.