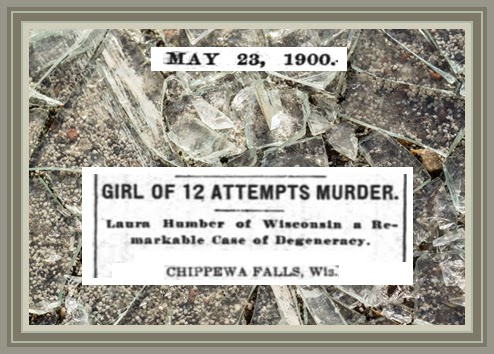 FULL TEXT: Chippewa Falls, Wis., May 22. – Laura Humber, 12 years old, daughter of Mr. and Mrs. John Humber, was brought into court here yesterday charged with attempting to murder her parents and three sisters. The girl broke glass into fine particles and placed it in several articles of food about to be served, but the glass was discovered by one of the sisters before any of the food was eaten. According to the father’s story the girl is utterly depraved. He states that she had tortured to death three domestic animals and a dozen chickens, and destroyed nearly all the family’s wearing apparel. Judge Condit committed the girl to the Industrial School in Milwaukee.