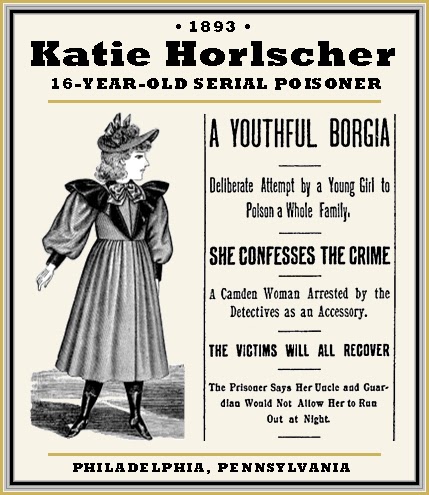 FULL TEXT: A diabolical plot to poison a whole family was unearthed by Detectives Crawford and Geyer yesterday, and Katie Horlscher, sixteen years old, who lived with her uncle and guardian, John Horlscher, at 623 Montgomery avenue, was arrested as the principal in the crime. She was given a hearing before Magistrate Clement and was committed for a further hearing next week. On the strength of the girl’s statement a warrant was sued out for the arrest of Mrs. Harriet Ritter, of 709 Fern street, Camden, as an accessory, and Justice Cassidy committed her to await requisition papers, when she will be brought in this city for trial.

Katie is the orphan child of Mr. Horlscher’s brother. Both her parents died when she was taken in charge by her maternal grandmother, Mrs. Trexler. She will be entitled to an estate amounting to several thousands of dollars when she becomes of age, and Mrs. Horlscher is the guardian of her person and estate under an order of the Orphan’s court. Katie has had the advantage of a good education for one of her years, but was inclined to be wayward, and fearing her grandmother was unable to exercise a proper care over the girl, Mr. Horlscher took her into his own family in August, and since that time has subjected her to strict discipline. The girl chafed under the rigid restriction which was placed upon her actions, but her uncle was all the more convinced that theywere necessary and gave no evidence of relaxing in the least.

Aside from Katie, Mrs. Horlscher’s family consisted of his mother, Catharine Horschler, his wife and two sons, Thomas, three years old, and Charles, two years old. On January 3 little Thomas became violently ill. He was seized with cramps in the stomach, accompanied by vomiting and purging, and Dr. Wood was called to prescribe for him. The medicine relieved the child, and a few days later both Mr. Horlscher and his wife were attacked with similar symptoms. A few days after little Charlie was also taken sick, and within a week the grandmother fell a victim to the same trouble. Katie was also taken sick at the time her grandmother was stricken, but soon recovered.

She said she was dissatified with her home because her uncle would not permit her to attend parties or go out at night. About Christmas she visited Mrs. Harriet Ritter, an old acquaintance who lived at 709 Fern street, Camden, and told her troubles. Mrs. Ritter advised her to put her uncle out of the way, and gave her a bottle of red powder which she was to put in the coffeem whisky or soup eaten by her uncle.

At a subsequent visit she gave hera bottle of white powder which was to be used in the same way, and Katie also alleges that Mrs. Ritter told her that if she came into possession of any money at any time she was able to take it to her and they would have a good time. She says she felt very sorry when the people were taken sick, and at one time she had placed the powder in the soup she was on the point of telling them that they should not eat it, but she changed her mind. She said the reason she became sick herself her grandmother compelled her to eat some of the soup, but she did not take enough to do her much harm and soon recovered from the effects, although she was very sick for a short time. When little Charlie was taken sick her uncle told her that it he died he would have the body opened and find out the cause of his death. This frightened her, and she threw the balance of the poison down the sink in order to destroy all evidences of her crime.

Katie talked freely of her crime and answered all the questions asked her by the detectives with apparent frankness. She did not appear to realize the enormity of the crime with which she was charged, and talked of her attempt to murder the whole family as if it were a matter the whole moment. The officers say that she does not show the evidence of a total depravity which might be assumed from the nature of her crime, but rather of careless disregard of the consequences of her act, or what the result would be to herself. The detectives have been unable to discover what poison was used by the girl, but from the symptoms of the people who were sick it is believed to have been arsenic.

Mrs. Ritter, who is charged with complicity in the crime, was formerly Miss Hines, who lived on Lawrence street near George, and was a near neighbor at Katie’s grandmother, when she was a child. She and the little school girl became warm friends, and the friendship thus established has still existed. Hattie Hines, as she was then known, did not enjoy the most spotless reputation, and when she married and removed to Camden the mantle of charity was thrown over her early escapades, and so far as is known by her friends on this side of the river, she has not been charged with any indiscretions since her marriage, but her former friends and acquaintances have been made against her by Katie Horlascher.

The detectives say the case against Mrs. Ritter is a very strong one, as the story of Katie of receiving the powders from her is corroborated by one of Katie’s girl friends, who was present when the bottle was handed over and heard the directions given by the woman for the use of the “extract,” as it was called by her in the conversation. Mrs. Ritter admitted knowing Katie and having received two visits from her during the winter, but she positively denied having either instigated the poisoning or knowing anything of the case. The evidence will be presented to the Grand Jury to-day, for the purpose of having an indictment found, upon which requisition papers will be based.

All the members of Horschler’s family have recovered from the effect of the poison except his wife and mother. The grandmother is still confined to bed is not entirely out of danger, but her physician has strong hopes for her recovery. The wife is able to be around the house, but is still suffering from the effect of her illness, and no fears are entertained for her.

[“A Youthful Borgia – Deliberate Attempt by a Young Girl to Poison a Young Girl to Poison a Whole Family. – She Confesses the Crime – A Camden Woman Arrested by the Detectives as an Accessory. – The Victims Will All Recover -  The Prisoner Says Her Uncle and Guardian Would Not Allow Her to Run Out at Night.” The North American (Philadelphia, Pa.), Feb. 11, 1893, p. 1]