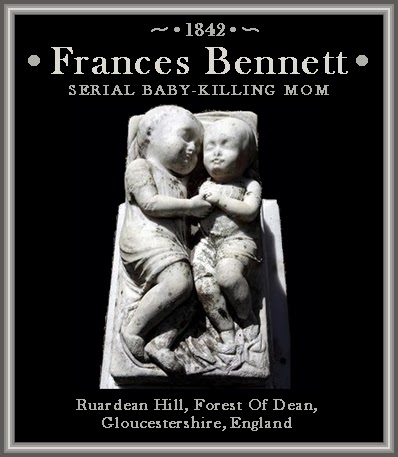 FULL TEXT: A guilty conscience has discovered a series of crimes. Frances Bennett, a woman living at Ruardean Hill, in the Forest of Dean, being ill, sent for the Reverend Henry Formby, the Curate of the place, and told him that she had successively killed six children which she had had by a man named Yapp. As the first five were born, they were drowned, and buried beneath the floor of a brewhouse; the last lived for two days; but being sickly, she poisoned it. The Police searched the brewhouse, and dug up the six skeletons; and an inquest was held on the skeletons on Tuesday; but Bennett, who had recovered, now denied her story. The Curate and her sister, however, deposed too distinctly to her confessions when ill for her to retract; and she and Yapp were detained in custody; the inquest being adjourned. One, which seems to have been the chief source of solicitude when Bennett was ill, was the desire to have the six bodies removed from the barn and buried in a churchyard.