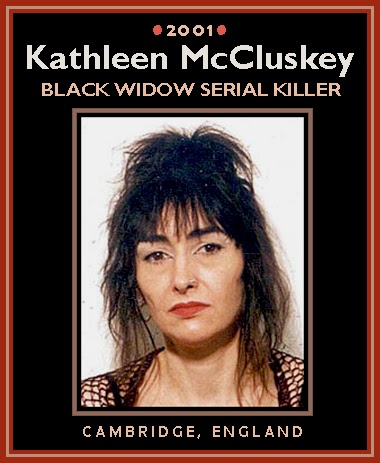 This is the story of a predator who selected male addicts as her targets.

Prosecutors described Kathleen McCluskey, resident in the famous university town of Cambridge, England, as bearing an “ambivalent attitude towards men.” She was charged of murdering four of them between 1999 and 2001 by manipulating them to overdose on methadone combined with alcohol. The woman who is described as always wearing black and “who encouraged friends to stroke a devil statue in her home” was described in the tabloid press as a “devil worshiper.”

Kathleen McCluskey was a drug addict and was prescribed methadone by a government addiction program. She was well versed in the dangers of overdose and dangerous drug combinations. In her Cambridge home, police found a copy of the British National Formulary, the “pharmacists’ bible,” which gives details of prescribed drugs and their effects.

McCluskey’s second alleged murder victim was Marvin Brodie, 32, a man who was “well-liked” but with a drink problem. She got to know him through a friend and in June 2000 went with him and some other friends to see a film. During the evening she was heard to say: “I don’t want to go to prison - I’ll kill you like I killed the rest.” She provided the man with a fatal concoction that ended his life.

Prosecutor Nigel Godsmark: “Four deaths is just too many to be a coincidence - the common factor is this lady.” He added: “In each case the defendant supplied the drugs or supplied the means of taking these drugs.”

A survivor of Catherine McCluskey’s toxic cocktail method is enlightening: “In November 2001 Peter Bakulinskjy came forward to report an incident which had happened on Christmas Day 1999. He had drunk methadone with an unknown additive at Mrs McCluskey’s home and was unconscious for five hours. McCluskey was later acquitted of administering a toxic substance - methadone - to him.”

On December 16, 2002, McCluskey was convicted Norwich Crown Court of two of the four homicides she was charged with – on the reduced charge of manslaughter. One hearing the verdict Kathleen flew into a rage, shouting: “This is f*****g ignorance.” When female guards were called to escort the convict to her cell, she was twice heard screaming “Ignorant b******s.”

On March 19, 2003, McLuskey was sentenced to 10 years in prison for two manslaughter convictions: 4 years for killing Assali plus 6 year for killing Brodie. During the hearing the sentencing judge admonished the murderess: “You have had a sad life. I bear in mind the effect that drugs have had on you. Nevertheless, although you have a borderline personality disorder, I have to take into account that you have shown little compassion or remorse for the deaths of these two men.” 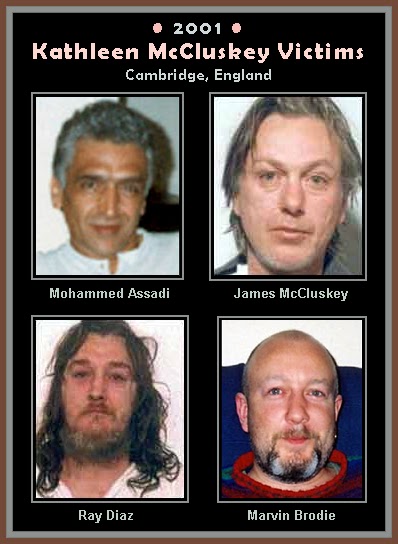 Mohammed Shoja Assadi, 48, known as Martin, lived alone and was a heavy drinker who was prescribed low level doses of methadone several years ago, artist.
Marvin Brodie, 32, worked occasionally as a care assistant.
Ray Diaz, 48, was a friend of McCluskey’s.
James McCluskey, 44, was her second husband. They married in September 2001, eight months after her first husband committed suicide using a vacuum cleaner pipe attached to his car’s exhaust pipe. Prosecutors later doubted the suicide ruling.