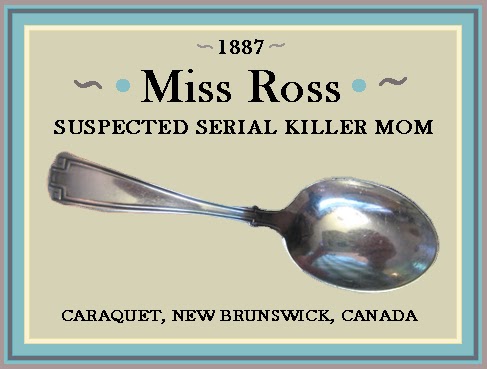 FULL TEXT: Moncton, N. B., July 20. – An unmarked woman named Ross, mother of three children, all of whom are dead, has been arrested at Caraquet charged with infanticide. She forced a spoon down the throat of her child, and when an attempt was made to extricate it it broke, one part remaining in the child’s throat. The infant died after suffering terrible agony. It is now suspected that the woman made away with her other two children, who died a short time ago.

FULL TEXT: A terrible story of infanticide comes from Caraquet, a village in Gloucester county, N. B. A short time ago, and within a few days of each other, two illegitimate children of an unmarried woman named Ross died and were buried without any suspicion being aroused as to foul dealings. Their mother had a third child, an infant girl, and on Sunday this one also expired, after suffering terribly from injuries inflicted by its parent.

Mrs. Norman, with whom the woman boarded, heard cries of pain issuing from the latter’s apartment. On entering the room she saw that the mother was forcing a spoon down the infant’s throat. Mrs. Norman seized the child and attempted to remove the spoon from its mouth, but it had been in so far that it refused to come and broke into two pieces, one piece remaining in the throat. The child died in fearful agony three hours afterward. The woman was arrested and an inquest held yesterday, when the jury pronounced her insane, and she is to be placed in an asylum. It is believed that the other two children were murdered, and there is talk of having their graves opened to see whether such was really the case. The people say that the woman is not insane and that she should be prosecuted for murder.