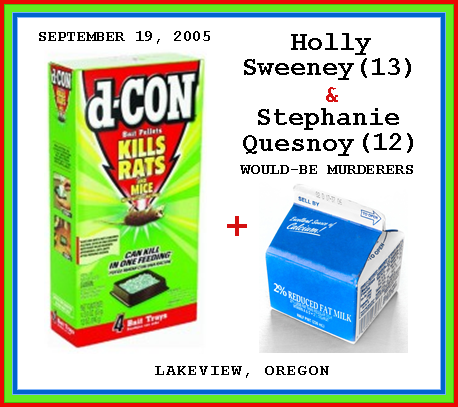 FULL TEXT: Lakeview, Ore. – May 13, 2006 – A 13-year-old girl convicted of attempting to kill two classmates by slipping rat poison into their milk was sentenced to up to 12 years in a juvenile detention center.

Holly Sweeney was ordered Friday to remain at the Hillcrest Girls' School in Salem until she is 25 with early release possible if she responds to treatment, the judge ruled.

Earlier this month, the judge found the Lakeview girl and her friend, Stephanie Quesnoy, 12, guilty of plotting and executing a plan to kill two classmates they disliked. Quesnoy is to be sentenced May 22.

The girls put d-Con rat poison in the milk of two classmates Sept. 19 during lunch at Daly Middle School. The victims noticed green crystalline pellets in the bottom of their milk cartons and neither was injured.

District Attorney David Schutt said the girls planned the poisoning to retaliate against the victims for putting shaving cream in Quesnoy and Sweeney's hair at a slumber party.

Both girls testified that they wanted their victims dead.

Schutt said a psychiatrist, who did not testify, determined Sweeney had trouble distinguishing right from wrong.

FULL TEXT: Lakeview, Ore. - A 13-year-old girl from Lakeview will be a ward of the Oregon Youth Authority until her 25th birthday, after plotting to kill classmates by putting rat poison in their milk.

Oregon Youth Authority officials will decide whether Quesnoy will be sent to a juvenile facility after she is evaluated for possible behavioral and mental problems.

Quesnoy and Holley Sweeney, 14, were found guilty earlier this month of planning and executing a pact to slip d-Con rat poison in the milk cartons of two Daly Middle School classmates during a lunch hour last September.

Authorities think the plan was hatched to retaliate after one of the victims put shaving cream in Quesnoy's hair at a slumber party a week before the attempted murders.

Sweeney also was tired of hearing about the other victim's rich grandmother, authorities say. No one was injured in the plot.

Quesnoy has been in the custody of the state Department of Human Services since 1999 because of unspecified home problems. Since February, she has been a part of the Boys and Girls Aid Society of Oregon, which offers at-risk youth various treatment programs.

Simpson has recommended that Quesnoy be evaluated by a psychologist for attention deficit disorder.

Prosecutors say Sweeney had shown a history of anger issues and told a therapist she hears voices.

The grandfather of one of the victims said at Sweeney's sentencing that he doesn't want to see Quesnoy or Sweeney locked away until they're 25. His granddaughter and the two girls had been friends for years, he added.

"It's one of those things that never should have happened," he said.