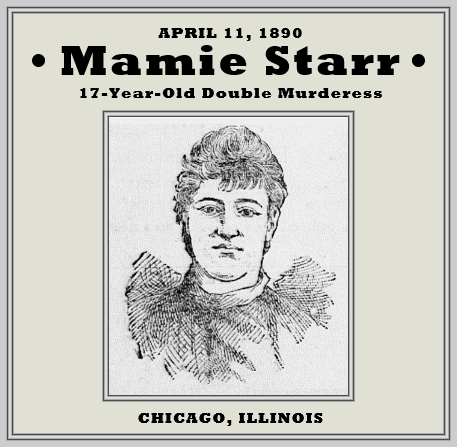 FULL TEXT (Article 1 of 2): Chicago, April 7. — Poison was administered in their food Friday [Apr. 11] night to the family of F. W. Newland, the retired real-estate dealer who lived at 6280 Wabash avenue, and as a result both Mr. and Mrs. Newland are dead, while their children. Frank Newland, aged 31, and Oracle Newland, 16 years old, have been violently ill, but will recover. A girl who had been employed as cook by the family and who disappeared as soon as they showed symptoms of poisoning after dinner Friday evening is now under arrest suspected of having administered the fatal dose.

The prisoner was sent to the Newlands on Thursday from the Anchorage mission, where she had given her name as Mamie Starr, but to the Newlands she gave it as Emma Stark. Friday afternoon at 4 o’clock the girl complained of toothache and borrowed a quarter of Gracie Newland to buy medicine. About that hour Dr. F. D. Rogers, 6110 State street says a woman bought a box of rat poison at his drug store.

The Stark girl, for it is almost certain it was her, returned to the Newland residence from the drug store and at once set about getting supper for the family. Among other things prepared for the meal was a quantity of canned corn, of which all partook, and it was in this that the poison was supposed to have been mixed. Shortly after eating supper Mrs. Newland was taken with a violent attack of nausea, and her son Frank went in search of a physician. While returning to his home with the doctor the young man became so ill that his companion was forced to carry him a great part of the way. Arriving at the house it was found that in addition to the illness of Mrs. Newland, her husband and daughter were both very sick.

Another physician was called. The symptoms were an intense burning sensation at the stomach, vomiting and great prostration, indicating arsenical poisoning. The proper antidotes were administered, but Mr. Newland expired at 4 o’clock Saturday morning and Mrs. Newland died just before noon. The son and daughter will recover, but are still confined to their beds and are not aware of the death of their parents.

Shortly after Mrs. Newland was attacked the servant girl left the house. When the police were notified of the affair they obtained a description of her, and as it answered that of the woman who had bought the poison at the drug store, search was begun, and ended in her arrest at the Park Theater Saturday afternoon. She positively denied all connection with the poisoning or that she had ever been employed at the residence of the Newlands, in spite of the fact that she was identified by a number of persons. Later on, however, she admitted her identity and also the fact that she had purchased the poison, but stoutly maintained that she did not put any in the food. She was despondent and wanted the stuff in order to put an end to her life. When the family became sick she was alarmed, and fearing that she might he charged with poisoning them she rolled the rat poison in her apron and left the house, throwing it away afterwards. The girl had no possible motive for committing the crime, and the belief is prevalent that she is crazy and irresponsible for her actions. She gave her name as Delia Foster and said she was a variety actress and that her real name was Mrs. Starr William Ray. She said she had a daughter 9 years old who was living with her husband, a bill poster at Fort Wayne, Ind .

[“A Servant Girl’s Crime. – Without a Known Motive She Mixes Poison in the Food of the Eagelwood (Ill.) Family by Whom She Had Just Been Engaged – Her Employer and His Wife Dead, and Their Son and Daughter Dangerously Ill - Arrest of the Culprit – Belief That She Is Insane.” The True Republican (Sycamore, Illinois), Apr. 12, 1890, p. 3] 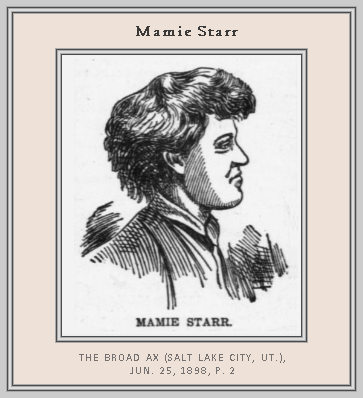 FULL TEXT (Article 2 of 2): When the doors of the Illinois state's prison at Joliet opened the other morning to permit the egress of Mamie Starr, the final scene in one of the most peculiar crimes that ever shocked Chicago was enacted. It meant the release and restoration to civil rights of a woman charged with, tried and convicted of the wanton, motiveless murder of a husband and wife, and the attempted murder of their children. It meant even more, for the victims of the deadly drug administered in the food prepared for the evening meal had taken in the murderess, thus carrying out the command of the Savior to shelter those in need.

The Jury of Cook county businessmen who passed upon the guilt of the accused woman decided that the remaining years must be passed within prison walls in order that justice might be satisfied. After six years' penal servitude the then governor of the state, John P. Altgeld, taking into consideration the birth within the prison of a daughter to the convict and the failing health of the mother, commuted the life sentence to a term of twelve years. Under the commutation law of the state this would release her by action of law in something over seven years from the date of admission to the prison. By direction of the present governor of the state, John R. Tacner, she was discharged a free woman only a few days ago. But for the fact that few juries could be induced to assess the death penalty on a woman, there Is little reason to doubt that she would have been so condemned and possibly executed a trifle more than seven years ago.

The crime of which Mamie Starr was convicted was singularly revolting. Not a full day had passed from the moment she was received under the shelter of the roof of F. W. Newland at C238 Wabash avenue when her rescuer and protector, Mrs. Belle Newland, her husband, son Frank, and daughter Grace, all the family, were writhing in the agonies of death caused by the poison placed in the food the new-found servant had cooked for supper. When the fateful April 5, 1890, dawned the Newland family was not aware of the existence of Mamie Starr. When the morning sun of April 6 rose from the bosom of the lake, the spirits of the father and mother had fled and the devoted children were lying in the throes of dissolution. Motive there was none, unless a mild reproof might have been sufficient to inspire the mind of the girl to murderous hatred.

Mrs. Newland was charitable, benevolent, philanthropic. She was a noted worker in the rescue of her fallen sisters, well beloved among the best people of Hyde Park and Englewood, member of the central W. C. T. U. and a director In the Anchorage mission, 125 Third avenue. To this latter fact she owes Indirectly her brutal taking off. Her husband was a business man of prominence, and her two children, respectively aged 18 and 16 years, were popular in the best society of the districts wherein they had lived. It was this happy home which was so fright fully broken up by a woman none had Been before the day of fate, and for no cause that men versed in tracing the workings of the depraved mind could fix upon.

Mamie Starr was an outcast, homeless, friendless, penniless. She was a performer in the disreputable theaters of that day, a woman with an Immoral record, one whose life was one of shame. But maternity was soon to come to her and she sought for some shelter in her time of greatest need. She went to the Anchorage mission and was received, for no wanderer, however miserable her past, was ever turned from its doors. The girl was fairly well educated, was intelligent and bright, although physically not pretty. She impressed Matron Snyder favorably. This was on April 4.

Mrs. Newland needed a servant and Mrs. Snyder knew of this need. The next morning early Mamie Starr appeared at the Newland home with a note from Matron Snyder. She was taken in and after Mrs. Newland had talked with her, she was accepted as cook and assigned to her duties. She prepared luncheon for the family and made a good impression. She was asked to do some sewing daring the afternoon, but bungled it badly and was required to do It over again and was also subjected to a mild reproof for her lack of care. This reproof is the only cause which has ever been discovered as a motive for the attempt at wholesale murder made that evening.

Later in the afternoon the girl became restless and complained of toothache. Miss Grace Newland gave her 25 cents with which to procure some simple remedy. Instead of doing this she went to a near-by drug store, procured a quantity of rat poison, presumably arsenic, and returned to her new home. When she prepared the supper for the family that night, she put a large quantity of the poison in some stewed corn. Each member of the family partook heartily of the food: In a short time, all were prostrated with a deadly sickness. Frank, the son, had taken a smaller quantity and he rushed but for a doctor. But the father and mother never recovered. They lingered until nearly daybreak and died in the agonies caused by the drug. The two children, while very, ill for several days, finally recovered.

In the confusion following the sickness of the family Mamie Starr escaped from the house and disappeared. Investigation proved that the poison had been administered in the stewed corn and she was suspected of the crime. She was finally located in the old Park theater as one or the company which was working about the place by Officers Trehorn and McDonald and placed under arrest. At first, she denied absolutely ever having been at the Newland home.

The young woman said that she had run away from her home in Lafayette, Ind., with a variety actor. They had drifted around, playing at the poorer houses for a time. He deserted her at Fort Wayne and she finally came to Chicago and commenced to play at one of the south side resorts. Then she said she intended to commit suicide to prevent her unborn child from coming into the world as a badge of disgrace. She went to the Newland home, bought the poison for the purpose of killing herself. She asserted that she did not intend to kill any of the family, but that If they were taken sick and recovered, she having eaten freely of the corn, would die and her death be supposedly an accident due to the food.

She was indicted on the charge of murder, tried and convicted in spite of a vigorous defense. In which the claim of mental unsoundness was set up. But the jury failed to believe in this plea and found her guilty. In view of her sex and condition her sentence was life imprisonment instead of death. She was taken to Joliet within a couple of months after the commission of the crime. There a baby girl was born to her. She has struggled all these years as well as her situation would admit to support the child, which is living with a sister in Indiana. Failing health and the child were made the motives of an appeal to Governor Altgeld for clemency. They were effective. She told the warden she should devote her life to the care of her child.

[“Is A Strange Crime. - Mamie Starr Poisoned A Whole Family. - After Serving Seven Years She is Released – Intended to Kill Herself and at the Last Moment Decided to "Take Company to Eternity.” The Broad Ax (Salt Lake City, Ut.), Jun. 25, 1898, P. 2] 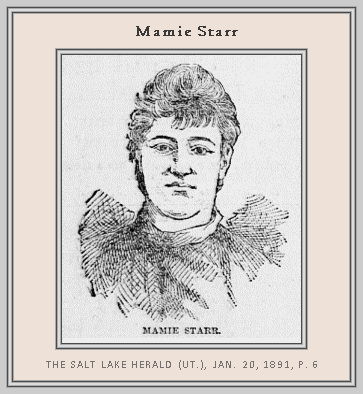