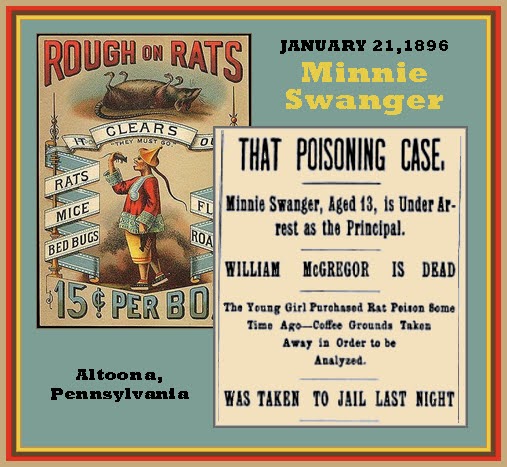 FULL TEXT: As a result of the mysterious poisoning at the home of Mrs. Mary McGregor Tuesday noon, William McGregor, her son, died in agony at 2 o’clock yesterday morning. Minnie Swanger, the 13-year-old niece of the deceased is under arrest charged with placing the deadly poison in the coffee. Mrs. Martha Johnston, Mrs. McGregor and the child Carrie Sill, though yet very ill, are considered out of danger by the attending physician Dr. E. S. Miller.

William McGregor, who drank more of the fatal mixture than any of the others, never showed any promising signs of rallying after he had been first seized with the agonies induced by the poison. He passed away at 2 o’clock, fully conscious. When the relatives and friends realized that death had indeed claimed him, they were for a time paralyzed by the realization that some one was guilty of the crime of murder.

Coroner James Foust was notified of the occurrence, who, after reviewing the body and gleaning what information he could, summoned Dr. Emil Cherry and Dr. E. S. Miller to view the remains with him. Realizing that a great crime had been committed, they decided to hold a post-mortem examination later in the day. Coroner Foust next devoted himself to the task of ascertaining who the person could be who caused to be administered the deadly draught. Reluctlantly, at length, his suspicions were directed against Minnie Swanger, the little bright-faced niece of the dead man, the chain of circumstances which led to the belief in her guilt is apparently conclusive, but the extreme youth of the accused and the apparent absence of motive makes the story difficult to believe.

On Monday afternoon Minnie entered the drug store situated at No. 2000 Seventh avenue, and asked if they had “Rough on Rats.” Being answered in the affirmative she departed, returning ten or fifteen minutes later, when she asked for five cents worth. On being told that it was only sold in fifteen cent packages she again went out. but soon returned with fifteen cents and bought a package from the clerk, W. A. Gracey, the clerk asked her what she wanted it for and she replied “for rats” The sale, with the date and the name of the purchaser, was entered in the register of poison sales, and no more was thought oi the matter.

Minnie came to Mrs. McGregor’s home a short time before noon on Tuesday. She was alone in the kitchen where the coffee was steeping a short time before the meal was served. Mrs. McGregor. who prepared the meal, having gone out to empty some ashes. All drank freely of the coffee at mealtime excepting Minnie. There is considerable doubt as to whether she tasted it at all. At any rate what she drank was but a trifling amount. Mrs. McGregor save she saw Minnie pour out some coffee in a saucer and drink it. When the others became sick Minnie was dispatched for a doctor. She went to Dr. Miller’s about 12.40 but did not say anything to him. Five minutes later she came back and told him to hurry over to Mrs. McGregor’s as some of the family were sick. Dr. Miller hastened over and quickly detected the signs of poisoning in Mrs. McGregor, Mrs. Johnston, Carrie Sill and William McGregor.

Minnie, he says, did not appear to be 11, but seemed only anxious to go to her name. Mr. Miner requested her to stay and help her grandmother, which she did for a time, but took advantage of the first opportunity to leave the house, Both Mrs. Johnston and Mrs. McGregor say that Minnie was sick ana that they saw her vomit, but the suspicion is that she drank only a little of the liquid to allay suspicion. If she was ill at all, it was out slightly.

Dr. Miller’s attention was first directed to the coffee pot. On his first examination he found the pot empty, save for a whitish sediment in the bottom. He asked Minnie who had emptied it and she answered that she had, though she assigned no reason for the act. He rinsed out the sediment and put it in a glass, which he took to his office. He, however, did not find time to analyze the substance, and yesterday gave it into the charge of Coroner Foust. He is inclined to believe that it is arsenic, as the symptoms of the patients indicated arsenic poisoning. “Rough on Rats” is almost pure arsenic, 90 per cent, being the quantity of arsenic in its composition. The amount of arsenic required to cause death is from one to three grains.

What did Minnie Swanger want with the “Rough on Rats?” Her father when questioned last night by a Tribune reporter, said that neither he nor his wife knew anything of the pack of the deadly drug Minnie purchased on Monday. Apparently then she did not want it “for rats” as she told the druggist. So thought the coroner and the police who were investigating the case. Accordingly, on the advice of the coroner and the police department an information! charging Minnie Swanger with “putting or causing to De put poisonous drugs or minerals into the coffee drunk by Mrs. Mary Mc Gregor, Mrs. Martha Johnston, William McGregor and Carrie bill,” was made before Alderman A. A. Stephens. The child was arrested at her home shortly before noon and taken to the mayor’s office where she was kept all day. About 10 o’clock last evening Constable Tate took her to Hollidaysburg to await a hearing.

The accused child was calm and self-possessed during her stay at the police court. She wept occasionally, when closely questioned, but for the most part her answers were intelligent and witty, if sometimes contradictory. She ate little, if anything, of the meals provided for her.

Doctors Emil cherry and E. S. Miller made a post mortem examination of the body of William McGregor

The deceased was 52 years of age, and for the last thirty years has resided in this city. He was a boilermaker by trade, being employed in the Pennsylvania railroad boiler shop. His wife had been dead twenty years. Two children, Edward, of this city, and Mrs. H. H. Howe, of Ricmond, Va.; his mother, one brother, Simon, and two sisters, Mrs. Sarah Edminson and Mrs. William Swanger, survive him. The funeral arrangements have not yet been completed.

Minnie Swanger, the accused child, will be 14 years of age in April. She is the daughter of William Swanger, of 2423 Sixth avenue, and is a bright little girl with a winning countenance and blonde hair. She is said to have a reputation for petty thieving. It is said that she was accused of taking a sum of money from her grandmother, and her resentment of this charge may have been the motive for the crime with which she is charged.

Dr. Emil Cherry was the first witness examined. He stated that he had assisted at the post mortem examination of the remains and had removed the stomach, which showed indications of erosive poisoning.

Robert Welsh, proprietor of the store where Minnie Swanger purchased the “Rough on Rats,” was next sworn, but on his explaining that his clerk had made the sale he was dismissed and the clerk, W.A. Gracey, summoned. Gracey related how the sale was made, which was substantially as appears previously. The poison sale register of the drug store was then produced, showing the entry: “Miss Swanger, Jan. 20, Rough on Rats, for rats. W. A. G.” The initials are those of the clerk who made the sale.

Dr. E. S. Miller was next sworn. He stated that he had been called to McGregor’s about 12.40 Tuesday afternoon by Minnie Swanger, who said that some people were sick at Mrs. McGregor’s and wanted him to come “right away.” Immediately on his arrival he asked what the matter was and was told that all had become sick while eating dinner. They were all vomiting violently, excepting Minnie, who did not appear to be sick. He administered hot water to the patients, and later antidotes, and meanwhile looked about to discover what sort of poison it could be. He discovered that of all the things on the table coffee was the only one thing of which all had partaken. He then looked into the coffee-pot, but found it empty, except a whitish sediment in the bottom. This he removed and asked who had emptied the pot. Minnie replied that she had. She did not assign any reason for the act. The whitish sediment, he thought, was some mineral poison, possibly arsenic. The symptoms of the sick indicated arsenic poisoning. He had not had time to apply a chemical test for arsenic. Minnie was not excited much, and he gave her no medicine. She had left the house once while he was there, going up the lot and entering the closet for a moment.

At this juncture Coroner Foust announced that the inquiry would close for the present, to await the convalescence of Mrs. Johnston and Mrs. McGregor. Their testimony will be taken Saturday evening, their health permitting. Meanwhile the stomach and its contents will be subjected to a chemical analysis. The jury then adjourned until 8 o’clock Saturday evening.