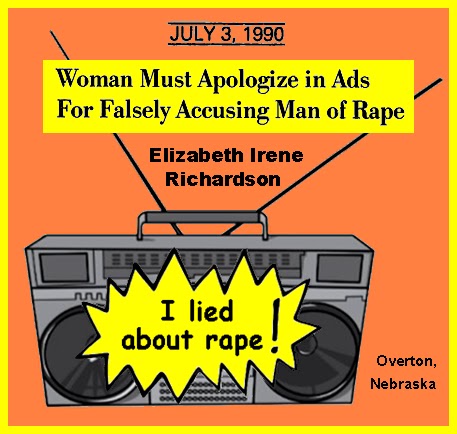 FULL TEXT (Article 1 of 3): Omaha, Neb. – A woman who falsely accused a man of raping her was ordered to run radio and newspaper advertisements apologizing to him. But the man says the sentence will not undo the damage.

“You can’t change a wrong to a right,” said Gary Nitsch. “I lost a job. I had to get a lawyer. The kids at school were saying to my kids, “Your dad’s a rapist.”

And the ads may never be printed or aired.

Elizabeth Irene Richardson, 24, is considering appealing the sentence, which the Nebraska Civil Liberties Union says may be cruel and unusual punishment.

Richardson accusing Nitsch, 44, of Overton, of raping her in September 1988. she reportedly told police that he raped her when he came to her housed in search of a painting job.

Nitsch was arrested and charged with sexual assault, but the case was dropped in February this year for lack of strong physical evidence.

Word reached authorities that Richardson has told friends the rape was a hoax. Her attorney, Todd McKeone, said Richardson admitted she made up the accusations to get attention from her husband, a trucker who is often away from home.

Richardson pleaded guilty to perjury in April and was sentenced June 8, according to press reports.

A judge ordered Richardson to apologize to Nitsch in half-page advertisements in every newspaper and on commercials on each radio station in Dawson County, a country of about 22,000 in central Nebraska.

The media campaign was expected to cost about $1,000, her attorneys said. She also was sentenced to 180 days in jail and was placed on two years’ probation.

A panel of state civil liberties union attorneys who reviewed the case said the sentence may violate Richardson’s rights under the Eighth and 14th amendments. 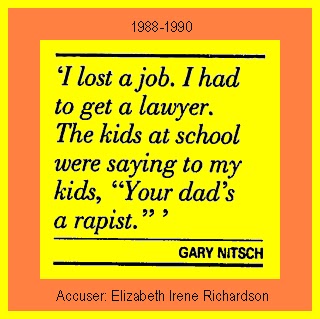 The Eighth Amendment protects individuals against cruel and unusual punishment and the 14th Amendment ensures due process.

The organization is “concerned about the scarlet letter approach in sentencing,” said Bill Schatz, NCLU executive director. “Suppose someone is arrested for shoplifting. Are we going to make him wear a sign saying he’s a convicted shoplifter? Is there such a thing as punishment fitting crime?”

If the case is appealed, the organization will offer research services and may file a friend-of-the court brief, Schatz said.

Nitsch said he was still puzzled about how his name came up in the rape charge.

He said he met Richardson once during the spring or summer of 1988 when he went to her house inquiring about the painting job she had advertised.

“I would just like to have someone tell me how I was named,” he said.

He said his ordeal has taken a toll on his family.

He said his wife, Naomi, “doesn’t like to come to town and face people.” His 18-year-old daughter quit high school in March because of the was she was being treated, Nitsch said.

Nitsch said he was fired from his job as a driver after being questioned at work by authorities and jailed for three days. He’s now a part-time construction worker.

He said he wants a full-time job but “people want clean help. They don’t want somebody that’s been in trouble with the law.”

“I used to go into town and drink coffee and joke with people, but everything just kind of turned sour,” Nitsch said.

“The first year, I was so depressed I didn’t want people to see me,” he said. “If I went into town I had to have somebody drive me so I could scoot down in the seat so nobody would see me.”

Nitsch said he is also bitter about the way authorities handled his case. His attorneys are suing four sheriff’s deputies for $100,000, claiming he was arrested and his home was searched without cause.

“Mr. Nitsch is apparently the victim of some lies. But that is not the fault of the sheriff’s department,” said Randy Goyette, an attorney representing the Dawson County Sherfiff’s Office.

“I believe that the case was very professionally and accurately handled,” O’Rourke said. “We went with what we had and we did the best we could.”

O’Rourke said Richardson decided not to pursue the case after he told her the trial would be difficult for her without corroborating evidence.

[“Woman Must Apologize in Ads For Falsely Accusing Man of Rape,” Sarasota Herald Tribune (Manatee AM Edition), Jul. 3, 1990, p. 2A]

FULL TEXT (Article 2 of 3): Lexington, Neb. – A woman sentenced to apologize in radio and newspaper ads to a man she falsely accused of raping her won’t appeal the sentence to the state Supreme Court, her attorney said Friday.

An attorney for Elizabeth Irene Richardson said he mailed a dismissal of the appeal to the
Nebraska Supreme Court on Thursday.

Ms. Richardson, 24, did not want to risk having a judge gave her a longer jail sentence if the Supreme Court decided she could not be ordered to pay for the advertisements as a condition of probation, said defense attorney Tod McKeone.

“There’s still some possibility of not having to run them (the ads),” he said.

He said the defense was considering alternatives to appealing the sentence to a higher court, including possibly filing a motion asking the district court for a sentence reduction.

“It would have been an interesting case to test this kind of sentencing to see if it would send up under constitutional grounds,” McKeone said.

Ms. Richardson, a former Lexington resident, was sentenced June 8 to 180 days in jail and was placed on two years probation for perjury.

A Dawson County District Court judge also ordered Ms. Richardson to apologise to Gary Nitsch in a half-page advertisement in every newspaper and a primetime spot in each radio station in Dawson, a central Nebraska county of about 22,000 people.

Ms. Richardson now lives in Overton, had accused Nitsch, 44, of Overton of raping her in September 1988. he was arrested and charged with sexual assault. Ms. Richardson told friends the rape was a hoax. She was convicted of her perjury last February. County attorney John Marsh said the woman’s was trying to get the attention of her husband, a truck driver who was often away from home.

Authorities later learned that Ms. Richardson told friends the rape was a hoax. She was convicted of perjury last February. County attorney John Marsh said the woman’s was trying to get the attention of her husband, a truck driver who was often away from home.

Nitsch, who said he had met the woman only briefly when he went to her house inquiring about a painting job she had advertised, has said that as a result of the false charge, he lost his job and his family was harassed.

FULL TEXT (Article 3 of 3): Lexington, Neb. - A woman who falsely accused a man of rape apologized Sunday in court-ordered radio ads, saying she hopes time will heal the damage to. the man's reputation. Elizabeth Irene Richardson, 24, was ordered to run radio and newspaper ads throughout Dawson

County in central Nebraska as part of her sentence for a perjury conviction last February. She was later to begin a six-month jail term for falsely accusing Gary Nitsch, 44.

"I want the public to know that these allegations were not true and that I made up the story for personal reasons," Ms. Richardson said in the radio ad. "While I realize there is nothing I can really do or say to repair the damage I have caused, I sincerely pray that time will heal the wounds my false allegation have inflicted on Mr. Nitsch and his family," she said. Ms. Richardson accused Nitsch of raping her in September 1988. He was charged with sexual assault, but the case was dropped for lack of physical evidence.