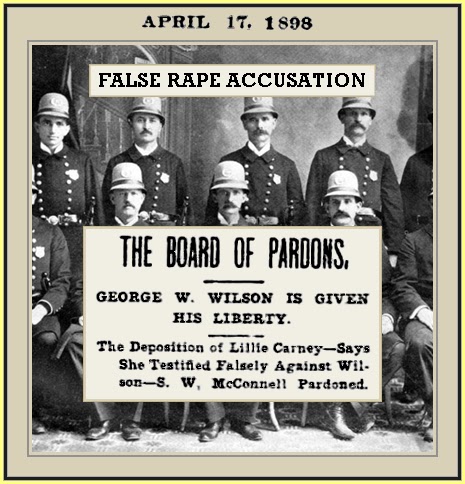 FULL TEXT: [Salt Lake, Utah] – It is now reasonable to believe that George W Wilson, who was convicted of the crime of attempting to commit rape and sentenced on Nov 19, 1895 to a term of four years imprisonment, may be innocent of the charge. His conviction was secured mainly on the testimony of police officers, who arrested him under suspicious circumstances in their zealous effort to learn the truth that justice might be meted out the supposed victim of the alleged assault was frightened into telling a falsehood which formed the basis of the conviction. Such was the view taken of the case yesterday by the state board of pardons, in giving Mr. Wilson the benefit of the doubt and granting him an unconditional pardon.

When Wilson’s petition for a pardon was first heard last year it resulted in a denial though his previous untarnished character was amply certified to by hundreds of prominent persons in California, where the accused formerly lived before securing employment here as the Walker house. His light sentence was due to the belief that he was of unsound mind. Judge King before whom he was tried and Judge Howat, the then prosecuting attorney endorsed his second petition. Chief Pratt and the police officers who the case against Wilson, joined in his request for his pardon.

The motive prompting the board of pardons to exercise clemency in Wilson’s behalf were the affidavits tending to prove that he was not guilty of the offense charged. Lille Carney, the young girl up on whom the assault was alleged to have been committed deposed that through fear of the police sending her to jail as they had threatened to do she finally admitted that Wilson had assaulted her and testified at the trial when in truth the accused had never laid hands upon her or violate her person, but on the contrary he had always been kind and correct in his deportment toward her. She also deposed that she had frequently related to her mother and to others that she had testified falsely against Wilson.

The affidavits of Mrs. Senie Carney, the girl’s mother, and Mrs. E. D. Temple corroborated the statements made in the deposition of the prosecution.

[Note: This article continues, but with discussions of separate cases of unrelated types of crimes. The text reproduced her is the full text of the first of these cases, the Wilson rape case.]