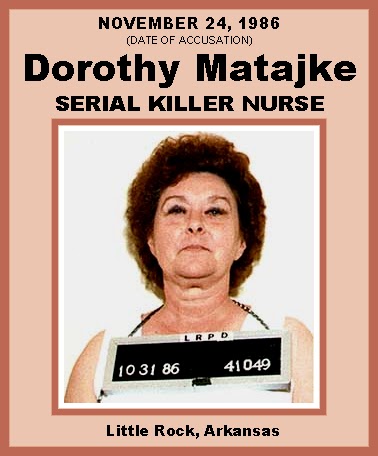 A resident of Nevada, Iowa, Dorothy Matajke began working as a nurse’s aide and professional companion for the elderly and ailing in the 1970s. It came as no surprise to anyone when several of her patients died, and there were no suggestions of foul play except where money was concerned. In 1973, Matajke was convicted of fraud and sentenced to five years in prison. She escaped in February 1974 and remained at large until 1980, when she was recaptured and returned to finish out her sentence. Despite the prison break, she won parole in 1983, serving less than the original five years.

Upon release, Matajke moved to Little Rock and picked up with her old profession as a live-in nurse. On March 24, 1985, she moved in with Paul Kinsey, 72, and his wife Opal, age 71. When Opal died on April 5, the cause was listed as a recently-discovered cancer.

Paul Kinsey’s health began deteriorating rapidly after his wife’s death, but relatives attributed his lapse to grief and loneliness.

On September 9, 1986, Matajke acquired a new client, elderly Marion Doyle. Another cancer patient, Doyle survived nine days of nursing by Matajke, but her death was not ascribed to cancer. Rather, a police report suggested that the woman had committed suicide. A routine inventory, made by the executor of Doyle’s estate, discovered several checks made out to Dorothy Matajke, totaling almost $4,000. There was something curious about Doyle’s signature, and on a hunch, her body was exhumed for reexamination. Tissue samples showed sufficient drugs to cause a fatal overdose.

Meanwhile, Paul Kinsey’s health continued to decline. The old man stubbornly refused to eat or take his medication, telling relatives that every meal or dose prepared by his “companion” left him deathly ill. Kinsey ordered Matajke out of his house on October 28, and three days later he was hospitalized in critical condition. Dorothy Matajke bullied her way past relatives and doctors to visit her ex-patient in the emergency room, and she was still by his side when detectives arrived to arrest her.

Initially, the “nurse” was charged with forgery and theft for looting Marion Doyle’s bank account. Subsequent charges included felony possession of a firearm, and additional counts of forgery relating to checks written on Paul Kinsey’s account. A search of Matajke’s home yielded mislabeled bottles of drugs and tranquilizers, along with three bottles of arsenic-based ant poison, and more serious charges were added.

On November 24, 1986 she was accused of first-degree murder in the death of Marion Doyle and first-degree battery in the non-fatal poisoning of Paul Kinsey. Opal Kinsey’s body was exhumed December 5, with the results of laboratory tests kept secret pending disposition of the standing charges. After Paul Kinsey died, on February 10, 1987, assault charges were replaced with another count of first-degree murder.

In June 1987, Matajke was convicted of Paul Kinsey’s murder and sentenced to life. Two months later, in a negotiated plea bargain, she received another term of 60 years for killing Marion Doyle. Charges are pending [as of 1991] in the case of Opal Kinsey, and new investigations are expected in the deaths of several patients “cared for” by Matajke in Iowa. 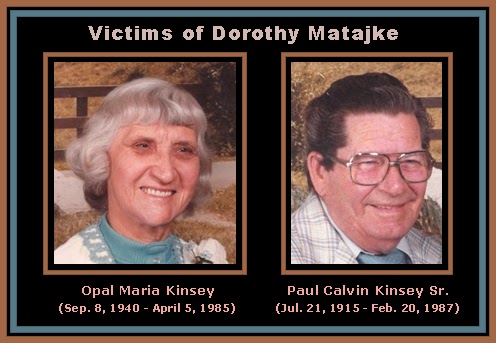