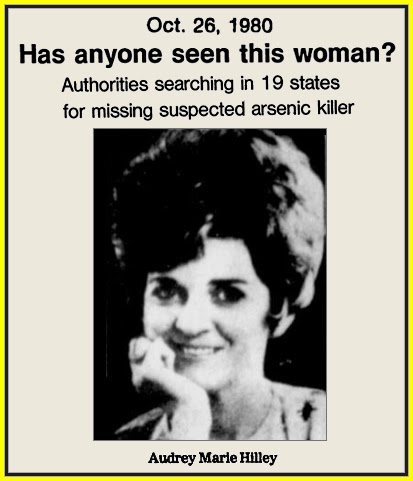 Audrey Marie Hilley (Alias: “Lindsay Robbi Hannon,” “Teri Martin”), born June 4, 1933, was suspected of two murders: husband Frank Hilley and mother Lucille Frazier and the attempted murder of  daughter Carol Marie Hilley, which took place between 1975 and 1979 in Anniston, Alabama. There has also suspicion that she had been slow poisoning the children of her neighbors and police investigators who had inspected sites of arson fires suspected to be set by Hilley.

The stories of Audrey Hilley’s two escapes from the court and from prison are among the most bizarre and dramatic in the entire history of female serial killers.

The account of the case published by CrimeLibrary.com, authored by Marlee Macleod, is an excellent overview. Below is a skeletal chronology of this remarkable case. 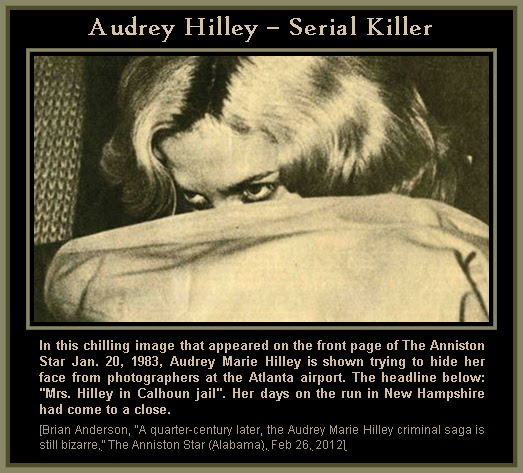 FULL TEXT: Birmingham, Ala. – Audrey Marie Hilley – charged with using arsenic to poison her daughter, who lived, and suspected of doing the same to several other relatives, who didn’t – has been missing without a trace almost one year.

The 19-state search for the woman is complicated by investigators’ growing suspicion that the Audrey Marie Hilley who disappeared from a Birmingham motel last November may be quite a different person today.

The only thing Mrs. Hilley left behind at the motel was a note. Investigators won’t release its contents, but say the scribbled message makes them believe Mrs. Hilley is living a life where she “changes her personality to fit her surroundings.”

“She can be kind, laughing, considerate and then brutal and hateful,” said the FBI agent who is coordinating the coast-to-coast search for Mrs. Hilley.

“We believe she is living in a world with make-believe friends and enemies. ... When she reads this, if it’s the real Marie Hilley. she will probably change her personality when she realizes what she is accused of doing.”

The 47-year-old Anniston woman – charged with unlawful flight to avoid prosecution for murder and attempted poisoning – is being hunted coast-to-coast by the FBI and 28 other federal divisions.

The FBI warrant against Mrs. Hilley stems from a Calhoun County indictment of Oct. 25. 1979, charging her with trying to poison her 20- year-old daughter, Carol Marie Hilley, with arsenic.

On Nov. 16. Mrs. Hiliey disappeared from the suburban motel where she was living while awaiting trial, free on $14,000 bond.

On Jan. 11, a Calhoun County grand jury indicted her on murder charges for the 1975 arsenic poisoning of her husband. Frank. She has also been indicted for check fraud.

The FBI agent, who asked not to be identified, has followed several hundred leads since the search began in January, all in vain.

“It’s not likely I’ll arrest Marie Hilley. An agent in another state will most likely arrest her,” he said. “But if the real Marie Hilley reads this she will likely change her personality or relocate or get careless and hopefully we’ll find her.”

The agent said that interviews with Mrs. Hilley’s friends and relatives, whom Cheese and watches are Switzerland’s best-known exports. However, the manufacture of machinery is its major industry. Switzerland’s industrial output is so extensive that it holds an annual fair — well-attended by industrialists all over the world – at Basel. she hasn’t contacted since disappearing, have led him to believe she may be exhibiting separate personalities.

He said she has used many aliases, among them Mandy Hilley, Julie Hilley, M.F. Hilley and Margaret Key, the real name of her aunt.

It was about a year ago that Carol Hilley almost died in an Alabama hospital. Her illness went undiagnosed for months until doctors discovered higher than usual amounts of arsenic in her blood.

The diagnosis led forensic experts to exhume the bodies of Frank Hilley, who died in 1975, and Mrs. Hilley’s mother, Lucille Frazier. who died in 1977.

Death certificates indicated both died of cancer, but pathologists found enough arsenic in Hilley’s remains to investigate. Arsenic was also found in Mrs. Frazier’s body but in amounts below the toxic range. Officials then ordered autopsies on other relatives.

Carrie Hilley, the fugitive’s mother-in-law, was ill for sev- «ral weeks before dying last November. Her autopsy report has not been released, but investigators have given evidence about her death and that of Mrs. Frazier to a Calhoun County grand jury. No indictments have been returned from that investigation.

The tests were made only on relatives who had died since Carol Hilley’s birth. Psychiatrists think the birth may have touched off Mrs. Hilley’s behavior.

Wed at age 18, she was having marital troubles when Carol, her second child, was born. Psychiatrists and investigators alike believe she resented her daughter’s birth, and that her resentment began surfacing long before they had evidence of arsenic poisonings.

As examples, the FBI agent noted two arson fires at the Hilley house, one when Frank Hilley was still alive, the second when Carol and her grandmother were in the house alone.

Urine tests to detect any arsenic were also ordered for people known to have visited the Hilley residence, including police who investigated the fires.

“One time some investigators went to that house and afterwards they became sick,” the agent said. “It’s possible they had been given some type of poison.

“There was a family that lived next to her for years,” he added. “The children were sick all the time, but doctors could never find out why. ... ‘This family eventually moves and the kids get well in no time at all.”

Investigators say they’ve determined the victims were given small doses of arsenic over an extended period.

“It eventually breaks down your nervous system, you loose control of your senses and you become unable to control your body movements,” the agent said, describing Carol Hilley’s ordeal.

On the day Mrs. Hilley disappeared, Mrs. Key reported her car missing. It was found at a Marietta, Ga., bus depot, but the FBI hasn’t yet determined whether the fugitive boarded a bus there.

The FBI agent said Mrs. Hilley is likely working in “a respectable job. She will be in secretarial work — she is a perfectionist and wouldn’t take a job that low-rates her.”

“She’ll be living a good life,” he added. “She will be in a beauty shop at least twice a week. She always dressed nice and her appearance was pleasant... always.”

Hilley is 5-foot-l and weighs 110 pounds. Her eyes are green, her hair brown. Her only identifying mark is a scar on a knuckle. 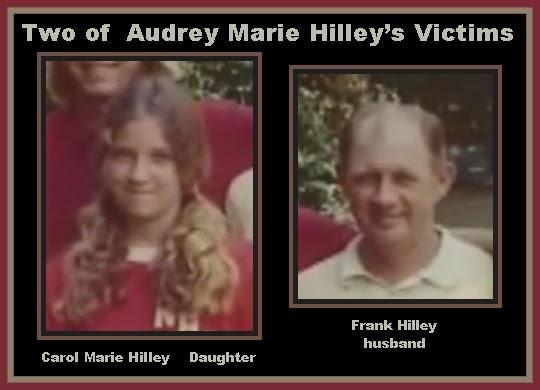 May 19, 1975 – Frank Hilley presents with nausea and pain in his stomach area. After entering the hospital he passes away on May 25, 1975. The cause of death at the time is listed as hepatitis. Audrey Marie Hilley then collects over $30,000 in life insurance. She spends the insurance money rapidly.

Jul. 1978 – Marie Hilley takes out an insurance policy on her daughter Carol Hilley in the amount of $25,000. Carol’s daughter is just a teen at the time.

1979 – Daughter Carol Marie Hilley, 20, suffers from numbness, nausea, and severe stomach pains. Her health declines over the next several months. Her mother continues to give her injections. She tells Carol not to tell anyone. Finally at the UAB Hospital in Birmingham, a doctor named Dr. Brian Thompson states that Carol Hilley tested positive for arsenic poisoning. After treatment she eventually begins to recuperate.

Oct. 3, 1979 – Her husband Frank Hilley’s body is exhumed and tested for arsenic poisoning. The results come back positive.

Oct. 3, 1979 – Forensic tests on Carol’s hair conducted October 3, 1979, by the Alabama Department of Forensic Sciences revealed arsenic levels ranging from over 100 times the normal level close to the scalp to zero times the normal level at the end of the hair shaft. This indicated that Carol had been given increasingly larger doses of arsenic over a period of four to eight months.

Oct. 9, 1979 – Audrey Hilley was still incarcerated on her bad check charges when she was arrested on October 9, 1979, for the attempted murder of her daughter.

Nov. 11, 1979 – Wilford Lane, her attorney, took her to Birmingham to stay at a motel. In the coming days she claimed she was afraid of reprisals from Frank’s sisters and asked to be moved to another motel, from which she made numerous phone calls to Mike and other relatives asking for money.

Nov. 12 or 13, 1979 – after changing her hair color and losing weight, she returned to New Hampshire and met John Homan, posing as Teri Martin, his “deceased” wife’s sister.

Nov. 18, 1979 – When Wilford Lane and his wife came to the motel to visit Marie, they discovered she was missing.

Nov. 19, 1979 – There was a break-in at the home of Audrey Hilley’s aunt. A car, some women’s clothing and an overnight bag were missing from the home. Investigators found a note in the house reading, “Do not call police. We will burn you out if you do. We found what we wanted and will not bother you again.”

Jan. 11, 1980 – she was indicted in absentia for her husband's murder. Subsequently, investigators found that both her mother and her mother-in-law had significant, but not fatal, traces of arsenic in their systems when they died.

Feb. 1980 – According to both Marie and John Homan, they met in Fort Lauderdale, Florida in February of 1980.

Mar. 1980 – By March Marie Jilley and John Homan had moved in together. Using a fictitious resume, Marie got a job as a secretary at an accounting firm in West Palm Beach.

Oct. 1980 – In October she and John left Florida for New Hampshire, where John’s brother Peter lived.

Jan. 13 or 14, 1983 – Vermont police capture Audrey Marie Hilley. By now she has completely changed her appearance. She is a slim blonde woman. She is arrested for unlawful flight, extradited, and quickly convicted for the murder of her husband and attempted murder of her daughter Carol. She is sentenced to life plus 20 years. While incarcerated she admits to another inmate that she poisoned her husband and daughter.

Jun. 8, 1983 – Marie Hilley is convicted and Sentenced to life in prison for her husband’s murder and 20 years for attempting to kill her daughter in June 1983. She spends her time in prison quietly and is considered a model prisoner.

Jun. 9, 1983 – Marie entered Tutwiler State Women’s Prison in Wetumpka, Alabama. She was assigned a job as a data processor and was classified as a medium security prisoner.

1985 – Despite reports that she talked constantly of escape and had reportedly made plans for a break out, she was reclassified in 1985 as a minimum security prisoner, which made her eligible for passes and leaves from the prison.

1986 – In late 1986 her first eight-hour pass was approved. That pass and three others came and went with no trouble; Marie returned to Tutwiler promptly each time.

Feb. 19, 1987 – she left Tutwiler Prison for the last time after qualifying for a three-day furlough.

1987 –  John Homan had relocated to Anniston, and he and Marie spent the weekend in a hotel room there. On Sunday morning she told John that she wanted to visit her parents’ graves and would meet him at 10:00 a.m. at a local restaurant. She wasn’t there. Returning to the hotel room, John found a note. “I hope you will be able to forgive me,” it read. “I’m getting ready to leave. It will be best for everybody. We’ll be together again. Please give me an hour to get out of town.” Marie wrote that a man named Walter was taking her out of town and that she would fly to Canada and contact John later. John called the sheriff. Given Marie’s history, authorities assumed she had a well-crafted plan of escape and had left the state quickly. No one expected what happened next. 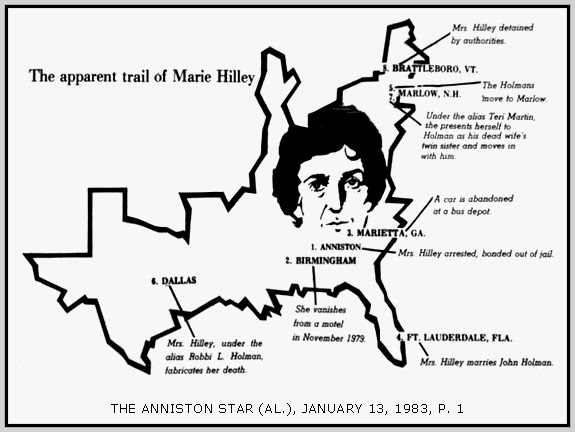 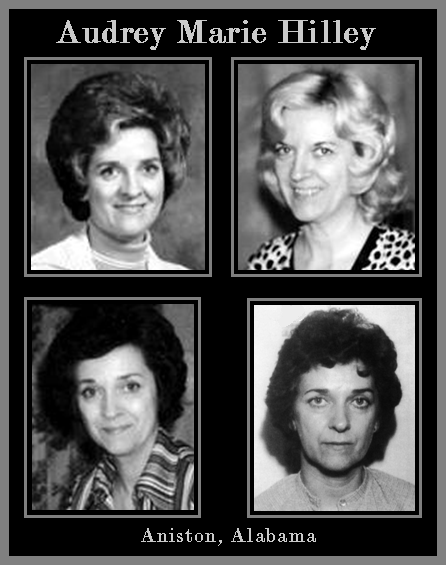 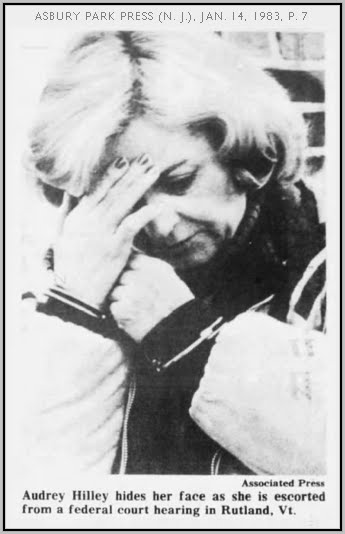 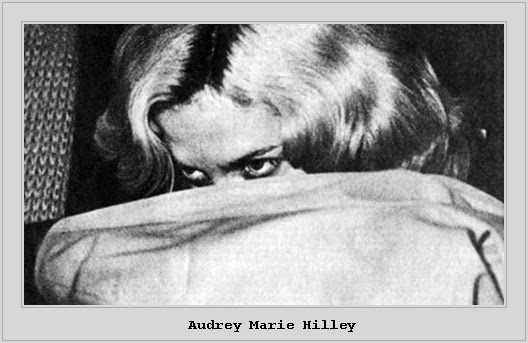 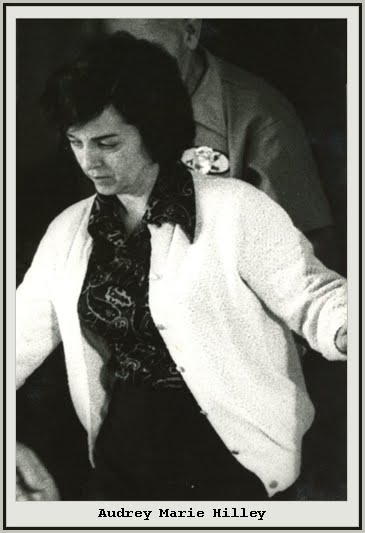 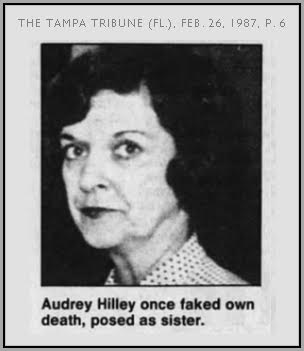 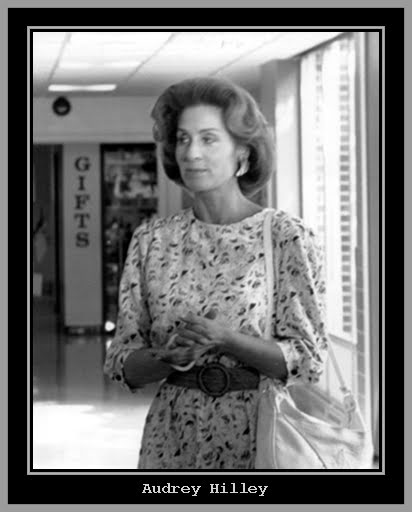 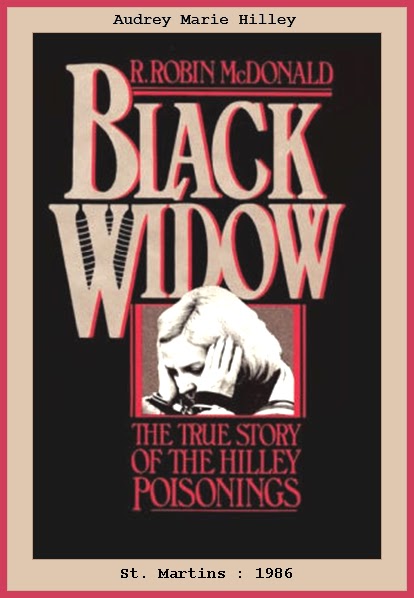 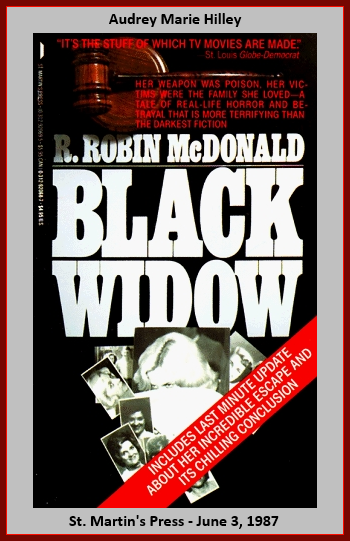 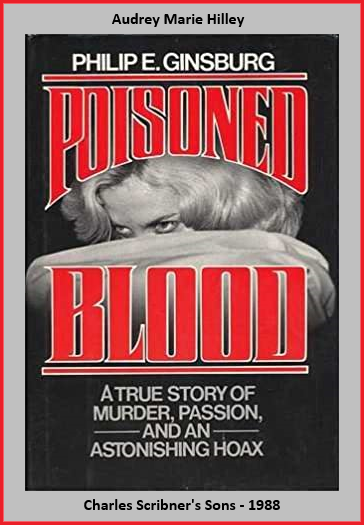