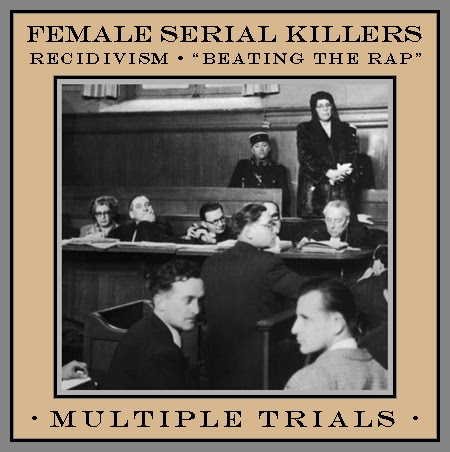 3 trials in rapid succession in 1847 for murdering children, each ending in acquittal. 1851 trial for murdering husband. Found guilty of attempted murder (based on presence of arsenic in body, yet possible death due to unrelated illness) and hanged March 25, 1851.

Baby Farmer – Convicted of homicidal neglect, circa 1880 (?), served six months hard labor. Prosecuted in 1896 for murdering a child in her care. She is credited with murdering hundreds of babies.

Released from prison after having served 12 years, she is arrested on suspicion of two murders.

In Indiana, she brought a small farm at a place called La Porte, a pretty little shack perched on a hill. Here, with her three children – she was a most devoted mother – she settled and soon married again, choosing Mr. Gunness whose name she was to make resound through time, who was shortly afterwards killed by a hatchet. As the widow explained to the sympathetic police, he was in the cellar when the hatchet slid from a high shelf., blade outermost, and stuck in the head. The kindly jury took her word for it and Mrs. Gunness collected the insurance money. [Philip Lindsay, The Mainspring of Murder, 1958; reprinted in Richard Glyn Jones, The Mammoth Book of Women Who Kill, Robinson, London, 2002, p. 233]

Arrested 1904, 1909, 1911; served time on non-homicide charges. She was a midwife and baby farmer credited of murdering hundreds of children, sometimes burying or burning them alive.

She was arrested in 1908 for poisoning children, but as there was no prosecutable evidence she was released. The following year her husband died and she was arrested on a charge of “lunacy,” since there was insufficient evidence for a homicide charge. She was acquitted. At the funeral of her 11-year-old daughter in 1911 she was arrested on suspicion of murdering the child. It took six trials  (due to either mistrial on a technicality after conviction, or hung juries) to finally successfully convict her and for the verdict to be upheld on appeal.

Tried 1913 for death of niece, a death which brought about suspicion of two earlier murders, of husbands. not convicted -- Mrs. Monahan is held without bail as a result of the death, apparently by poison, of her third husband, John T. Monahan, in the New Haven hospital yesterday. He is the fourth person in her immediate family circle to die under perplexing circumstances.

She was acquitted of two different murders in separate trials in 1923. But in 1936 she was convicted and executed for another murder.

This baby farmer (child care provider) was charged with murder in 1917, but got off. In 1922 she was charged with kidnapping of a baby yet also went unprosecuted. In 1925 following a substitution of a baby she was investigated for that crime as well as a large number of suspected murders yet was convicted only of substitution of a child. Standards of evidence prevented her from being prosecuted successfully for child murders and child abuse.

She tortured and murdered two husbands in the most cruel manner. Sent to Brazil’s “devil’s island” she married a fellow prisoner there. When he failed to meet her expectations she invented yet another excruciatingly painful method of murder for his benefit.

Bertie Wrather was tried four times for one of three murders publicly investigated (other possible murders were also investigated; plus there was one attempted murder). She was convicted at the third trial. A retrial about two years following gave her an acquittal. The husband she poisoned immediately divorced her when she won acquittal.

Acquitted poisoning her 3-year-old grandson, and suspected of a 1921 murder, Mrs. Winter was back in jail just seven months later after arsenic was found in the milk that poisoned her daughter and granddaughter and Marjorie. She was tried for attempted murder and, again, was acquitted.

Technically one trial beginning in 1952, yet with several adjournments lasting 9 years and in 1961 resulting in no conviction.

Winnie Green (as she was called then) confessed to murdering her parents-in-law and she had tried to murder her husband. In 1925 she was sentenced to life for one of the murders. She was paroled in 1931, and arrested in 1935 for check forgery. She may have committed another murder in 1946. She was sent back to prison for check forgery in 1948. Out of prison again she committed another murder in 1953 and convicted for the crime in 1954.

Murdered her husband but convinced investigators her toddler daughter accidentally shot him. She jumped bail before 5th trial for the murder of a woman. While on the run she killed a man in Mexico. Convicted in Mexico, she was to have returned to the US on trial after release. She escaped from the Mexican prison and was never heard from again.

Convicted of murdering third husband and his sister. She was sentenced to death. Due to trial error the conviction was overturned. At that time an indictment for the murder of her second husband was pending. It was apparently dropped (as no later news reports have yet been found).

Witnesses disappeared during prep for prosecution of first 2 murders

Recidivist. The “Czech Aileen Wuornos. A prostitute who, between 1981 and 2003, murdered four men, two of them elderly, aged aged 84 and 78. She was convicted and served time for murder twice, but was allowed parole, allowing to continue her criminal career.

She is credited with 11 murders. She was first arrested in 1993 and jailed for four years for fraud after poisoning her first victim the year before, but police were unable to find sufficient evidence to try her. Van was again arrested in July 2000 after police suspected her of poisoning a married couple to steal their minivan.

Recidivist jailed numerous times for various crimes. Served time for murder in the US, was deported and married an elderly man and attempted to murder him in Nova Scotia. 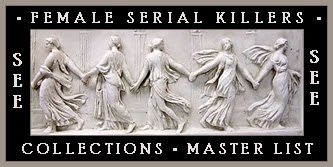