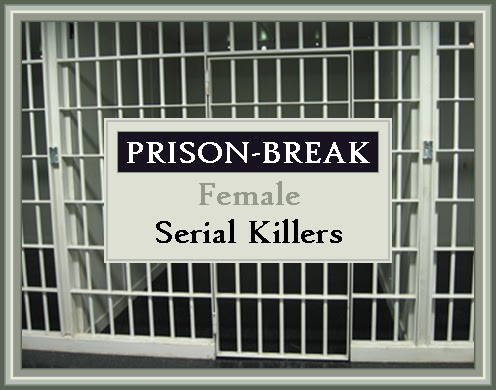 On October 6, 1877, about midnight Mme. Fortmeyer, sentenced to ten years imprisonment, made her escape from prison in Jefferson City, by forcing her body through over the transom of her cell.

Lydia Sherman escaped from Weathersfield State Prison, Connecticut, on Tuesday May 29, 1877. She was apprehended the following Tuesday, June 5.

It is a singular fact that the female convict [Ann Miniver Davis] in the Melbourne Goal, who has to look after condemned women, is a "lifer" tor poisoning her husband. She was sentenced to death, but her sex saved her. After serving twelve years of her sentence, she escaped from the Melbourne Gaol.

Two women kidnapped and murdered seven children for the purpose of dissecting them for scientific research. “A village council was called, and was decided to lynch the disciples of human vivisection at noon today. The women were stripped and fastened by strong chains to an iron bar in tha wall of their cell. At daybreak this morning it was found that they escaped in the clothes of their jailers, both of whom, though powerful peasants, had had their heads battered in and their throats cut and were dead.”

Mattie Troy, alias Mary Thomas, wanted for the murder in the first degree in connection with the death of a child here shells alleged to have murdered in order to collect insurance carried on his life, escaped from the Parsons State Hospital on January 2, 1911, about 7 o’clock, an although she was hunted high and low all day yesterday, scarcely any trace of her could be found.

A struggle which seems an attempt to escape.

Mrs. Clara Carl, 50, who escaped from the Indiana Womans’ prison On October 3, 1925,  while serving a life sentence for the murders of her husband and father-in-law was back in her cell on October 12. She was caught in Columbus, Ohio, Saturday night (October 11) and reentered the prison last night.

After less than five hours of constricted liberty, Mrs. Anna Louise Sullivan, Milwaukee poison murderess, was back in confinement Friday at the state prison for women at Taycheedah, from which she had attempted to escape Thursday. Mrs. Sullivan, who had been assigned to outside tasks because of her health, was reported missing at a checkup at 11 a. m. it was believed at that time that she had walked out the unguarded gates of the honor institution. Several hours later, however, she was discovered hiding in a copse on the 244 acre prison grounds. Because of her escape attempt, Mrs. Sullivan’s privilege of working outside has been revoked. Mrs. Sullivan was sentenced to a life term for murder here in May, 1929. She had confessed that she killed her 17 year old stepson and her second husband with poison and had poisoned her third husband and stepdaughter, although not fatally. She was convicted of the killing of her stepson.

She escaped from prison in 1970 and lived as a fugitive for 32 years.

In December 1968, Mary, who had murdered two children and had attempted to murder two othjers, was found guilty of manslaughter and sentenced to life imprisonment. After spending eight years in young offenders institutes, Mary Bell was transferred to Moore Court open prison from where she escaped, with two boys, in 1977. They were at large for only two days.

The stories of Audrey Hilley’s  two escapes from the court and from prison are among the most bizarre and dramatic in the entire history of female serial killers.

On August 1, 2011, the commander of the Metropolitan Police of Valle de Aburrá, General Yesid Vásquez confirmed the recapture of the accused under the age of multiple crimes that link to Colombian criminal organization Tablazo. “La Perris” had escaped from prison under Medellin on Friday, July 29, 2011.

Serial killer Joanna Dennehy plotted to cut off guard's finger to escape jail.  She hoped to use the finger to beat the prison’s biometric security, a source claimed. But the plot – detailed in a written plan by Dennehy – was thwarted when two fellow inmates got in touch with the authorities. Dennehy plotted the prison break while in segregation at Britain’s most secure women-only jail – HMP Bronzefield, in Ashford, Surrey. The source said: “With the help of another lifer, she was planning an escape. What came to light was how she was going to do it, which was extremely vicious.
2014 – Marixa Lemus – Pasaco, Jutiapa, Guatemala
2017 – Maria Nazaré Félix de Lima – Ielmo Marinho, Grande Natal, Brazil
***