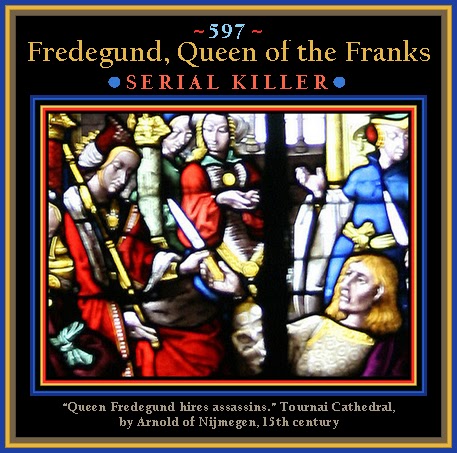 Wikipedia (Article 1 of 3): Fredegund (or Fredegunda) (Latin: Fredegundis; French: Frédégonde) (died 597) was the Queen consort of Chilperic I, the Merovingian Frankish king of Soissons.

All her wealth and power came to her through her association with Chilperic. Originally a servant of Chilperic's first wife Audovera, Fredegund won Chilperic's affection and persuaded him to put Audovera in a convent and divorce her. But Chilperic then put Fredegund aside and married Galswintha. Galswintha died the same year, probably strangled by Fredegund (c. 568), who succeeded Galswintha as queen. Galswintha's sister, Brunhilda, however, began a feud which lasted more than 40 years.

Fredegund is said to have ordered the assassination of Sigebert I of Austrasia in 575 and also to have made attempts on the lives of Sigebert's son Childebert II, her brother-in-law Guntram, king of Burgundy, and Brunhilda.

After the mysterious assassination of Chilperic in  584 AD, Fredegund seized his riches and took refuge in the Notre Dame de Paris cathedral. Both she and her surviving son, Clothar II, were protected by Guntram until he died in 592.

Gregory of Tours depicts her as ruthlessly murderous and sadistically cruel; in his account, Fredegund perhaps has few rivals in monstrousness. Although she did not live to see it, her son's execution of Brunhilda bore the mark of Fredegund's hatred: Clothar II had the old queen, now in her sixties, stretched in agony upon the rack for three entire days, then watched her meet her death chained between four horses that were goaded to the four points of the compass, tearing her body asunder.

Fredegund died 8 December 597 in Paris. The tomb of Frédégonde is a mosaic figure of marble and copper, situated in the Saint Denis Basilica, having come from the abbey church of Saint-Germain-des-Prés.

FULL TEXT (Article 2 of 3): Laffaux Mill, recaptured by the French not long before the end of hostilities [in World War I], figured prominently in the fortunes of the worst woman that ever lived. Fredigond [sic], a serving maid, Attracted the notice of Chilpericc I., King of the Franks.  Before Chilperic married her, she got one queen repudiated and strangled another. Then she murdered her three stepsons. Because her first two sons died in infancy, she accused a number of women of witch craft and had them tortured. When her third son was born she had Chilperic murdered, and became Regent. In extending her kingdom her armies won a great victory at Laffaux in 595. 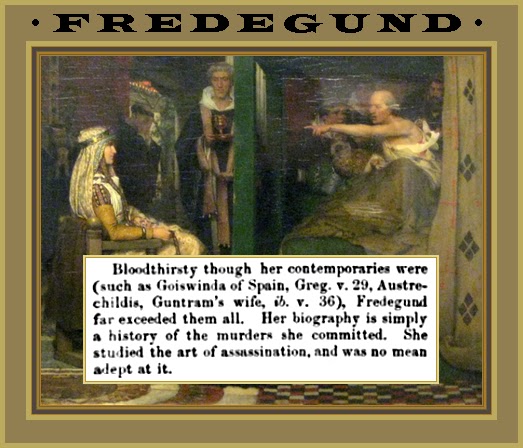 FREDEGUNDIS, FREDEGUND, originally a slave of Chilperic l. (Gesta Reg. Fr. 31), became his wife by supplanting Audovera. Whilst Chilperic was absent on an expedition against the Saxons, Audovera brought forth a daughter. At Fredegund’s instigation the daughter was baptized before the return of Chilperic, and Andovera was induced by Fredegund to hold the child at the font, thereby becoming godmother to her own daughter. Chilperic on his return discarded Audovera, compelling her to take the veil, and took Fredegund to his bed. (On the authenticity of this story v. Löbell, Gregor von Tours, p. 23, note.)

The position of Fredegund was little more than that of a concubine, one wife of many (cp. Lobell, pp. 21 sqq.); and in 567 Chilperic, in order to have a wife of equal station and rank to that of his brother Sigebert, married Brunchilde’s elder sister, Galswintha, daughter of the Visigothic king Athanagild. Chilperic promised his father-in-law to discard his other wives. But before the year was out Frcdegund recovered her influence. Qunrrels arose between Fredegund and Galswintha; the unhappy Galswinths thought to be allowed to return home if she left her treasure behind. Chilperic dissimulated, and Fredegund had her rival foully murdered, and a few days afterwards was openly married to Chilperic (Fredegundim recepit in matrimonio, Greg. Turon. iv. 28).

The duty of revenging Galswintha’s death devolved upon Sigebert, her sister’s husband, and it would appear that he and his brother proceeded to take steps to depose Chilperic, but. that an arrangement was arrived at by the intervention of Guntram, by which the wrath of Brunchilde and Sigebert was bought off by the presentation to lirunchilde of Galswintha’s “ morning—gift “ offive Aquitanian cities. (Greg. ix. 20; see G. Richter, Annalen d. Deutschen Reichs, note, 5. a. 567.)

Bloodthirsty though her contemporaries were (such as Goiswinda of Spain, Greg. v. 29, Austrechildis, Guntram’s wife, to. v. 36), Fredegund far exceeded them all. Her biography is simply a history of the murders she committed. She studied the art of assassination, and was no mean adept at it. See her address to the two clerks whom she employed in one of her attempts to murder Childebert. (Greg. viii. 29.) Having once begun the policy of getting rid of her enemies by assassination, she did not scruple to continue it to the end. She brought about the deaths of her stepsons Meroveus (v. 14, 19 s.f.) and Clovis (v. 40), she made more than one attempt on the lives of Bruncliilde and Brunchilde’s son Childebert (vii. 20, viii. 29, x. 18. also against Guntrnm viii. 43, 18), and an exceptionally horrible attempt with her own hand on her own daughter Rigunthis (ix. 34). According to the Gesta (c. 35) she caused her husbanzl Chilperic to be murdered because inadvertently she had discovered to him her adulterous intercourse with Landerich. Lobell (p. 25, note) doubts the truth of this charge. Gregory has not alluded to it, nor does he ever mention Landerich. Compare, however, bk. vii. 7, where Childebert, in demanding the surrender of Fredegund, accuses her of this murder amongst others.

She crowned her wickedness iathe eyes of her contemporaries by having Praetextatus, bishop of Rouea, who had given her mortal offence by blessing the marriage of Meroveus and Brunchilde, murdered before the altar, and by openly poisoninga Frank noble who protested against her wickedness (viii. 31, 41).

But her political assassinations were almost the least horrible that she committed. Her personal revenge was absolutely implacable. Once offended, she never rested satisfied with anything short of the blood of her victim. And her revenge was prompted by various motives, indignation at affront or false accusation, as in the case of Leudastes, towards whom she showed the most calculating cold-blooded cruelty (v. 50, vi. 32); superstition, as in the case of Mummolus (vi. 35); and lastly, the frantic rage of disappointed passion or baulked vengeance (vii. 20, v. 19). No wonder that Guntram, her brother-in-law. calls her “an enemy of God and man “ (ix. 20); and Gregory adds “that she had no fear of God before her eyes “ (vii. l5). Devoid of natural affection as she generally appeared to be (vi. 2.3, cp. vii. 7), even she felt remorse for her wicked deeds when she saw her children dying before her face. Seized, Gregory says. with a tardy repentance, she addressed her husband thus: “ Long has the divine mercy suffered our evil deeds; we have been warned by fevers and by other ills, but we have not repeated. And now we are to lose our children, now they die, slain by the tears of the poor, the wailing of the widow, the sighs of the orphan. We are bereft, and without hope, none remains to us for whom to hoard. Do not our cellars overflow with wine, our granaries with corn, our chests with gold. silver, and precious stones? And yet the dearest treasure we possess, that we lose. Come, let us burn these unjust taxation rolls, let us be content with the revenue that satisfied our father Clotaire.” The king hesitated. “What!” she cried, “ you shrink? Follow me. Even though we lose our beloved children we shall at least escape eternal punishment.” Chilperic yielded, the rolls were burned, and the tax remitted (v. 3.3, cp. also x. 11).

That she really ruled rather than Chilperic, or that at any rate she was the moving spirit in much political action that wu taken, is evident from what has already been narrated or referred to, especially from the stories of Praetextatns and Leudastes. Nor was she without vigour and resources in adversity as well as in prosperity. On the murder of her husband she was left with her infant son Clotairc. apparently defenceless and surrounded by implacable and unscrupulous enemies. She took refuge and sanctuary at Paris, and was astute enough to place herself for the moment under the protection of Guntram, the least dangerous of her enemies, escaping but only just escaping the vengeance of Childebert. “Let my lord come,” she wrote, “and take the kingdom of his brother. I have a little child that I desire to place in his arms. For myself I submit to his rule” (vii. 4-6, 7). Subsequently she had to retire to Rueil (vii. 19), but even when her fortune was at its lowest ebb she still hoped to find an escape for herself by the murder of her foes (vii. 20). Later on her capital was at Tournai, and it was there that in order to maintain internal peace within her realm she caused three turbulent Frankish chiefs to be murdered at her table (x. 27). Apparently a rising took place, Fredegund was seized, and was to be delivered over to Childebert. She contrived, however, to raise a counter revolution within Childebert’s kingdom in Champagne, and was herself rescued. Again she appealed to Guntram, and got him solemnly to preside at the baptism of Clotaire (x. 28). In 593 Guntram died, and Childebert became sole king of the Franks. Clotaire’s kingdom and Fredegund’s rule at this time appear to have embraced little more than the Frisian, Flemish, and Norman coast lands, the extreme north-west of Neustria (Bonnell, Anffänge d. karol. Hauses, p. 218). On Childebert’s death, however, in 596, Fredegund seized Paris, Soissons, and other cities (Fred. 17) without warning or declaration of war (ritu barbaro), and ravaged the country around Soissons, defeating the forces of Theodebert and Theoderic at Lafaux (Fred. 17). A few months afterwards she died, in 597, and was buried in St. Germaindes-Prés, at Paris.

Even though she may not have been guilty of the murder of her husband, it is preposterous to attempt to exalt her in any way into a heroine. The eulogy upon her by Fortuuatus (Carm. iv. 1) may have been prompted by flattery or fear. But apologies such as were made in the last century by M. Dreux du Radier (Mémoires historiques etc. des Reines et Régentes de France, vol. i. Amsterdam, 1776), and in this century by Luden, can only be maintained, as Lobell (pp. 342-4) has pointed out, at the expense of the authenticity of Gregory or of the character of the Frankish nation. Much relating to the history of Fredegund is to be found in Thierry’s Récits des Temps Mrovingiens. [T. R. B.] 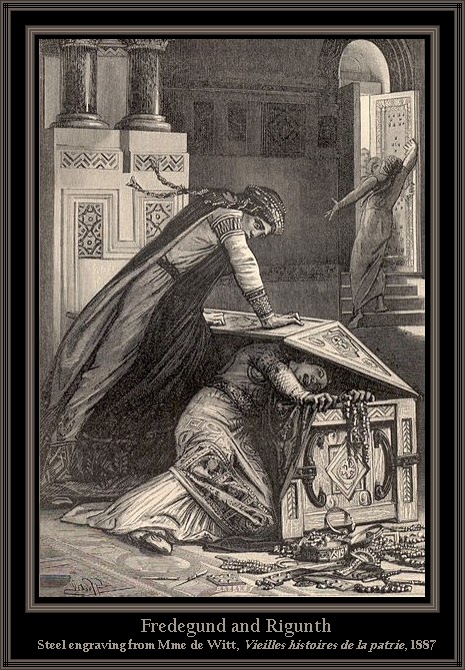 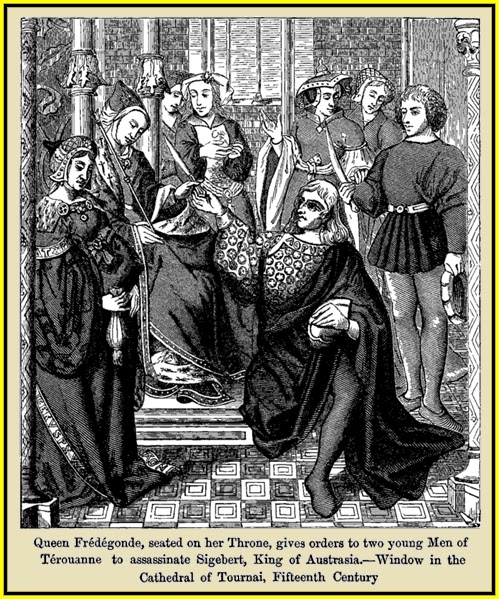 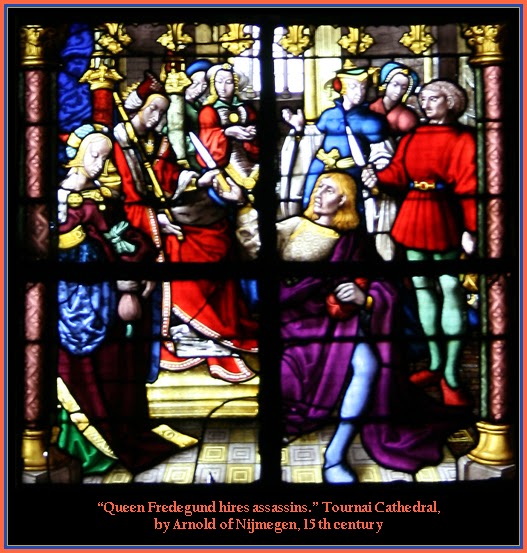