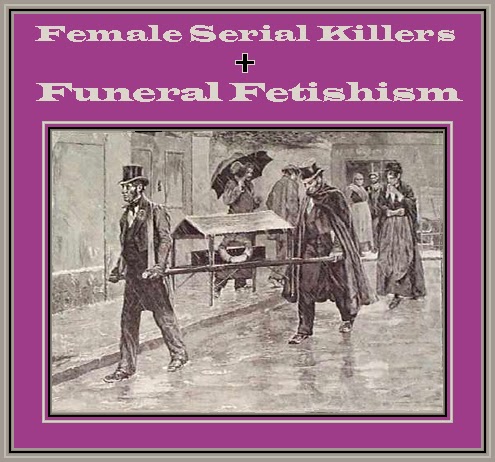 This collection contains cases involving particularly interesting aspects dealing with funerals and graveyards, most notably those in which the killer demonstrates an obsession with funerals.

“She declared herself persecuted by the apparitions of her victims; and strangely enough sought refuge at the graves to which she had sent them.” [“Remarkable Female Criminals – The Poisoners of the Present Century. Second Part” (pp. 213 ff.). The Dublin University Magazine, Volume 29, Feb.1847, 222]

"When he died she displayed most unseemly joy—even the gravedigger, who attended the funeral repast, was shocked at it. “I have been,” he said naively, 'to a great many funeral repasts, but never saw one so merry.'”

She created some indignation were also exited by the proof  that she had herself written and caused epitaphs to be placed on the graves of her victims: –

“Here lies the body of Anne Marie Florine Marchal, who died the 28th of February, 1848, aged eight years. This child, notwithstanding her tender years, displayed rare qualities of mind; her obedience and modesty caused her death to be deeply regretted by her mother, who has erected this monument to her memory.”

“Here lies the body of Jean-Baptiste Segard, aged thirty-seven. He was a good husband, an affectionate father, and a Christian devoted to the poor. To her dear and virtuous husband his grateful wife erects this monument. May he repose in peace.”

"She had the bodies of her husband and children removed from the old grave-yard to the new cemetery, paid for the new lot herself, bought tombstones, which she paid for in sewing, and left a little space between Hoag’s and little Frankie’s graves, where she was to be buried."

Before she became a murderess, she loved to prepare corpses for burial. Eventually she satisfied her mortician mania by supplying the corpses herself, about a dozen of them eventually. She loved to watch her victims suffer from the arsenic she gave them. Her confession was a remarkable revelation of human depravity. She had become obsessed with the liking for scenes of moral agony, and her mania went even farther, making her revel in coming into contact with dead bodies, which she loved to handle and prepare for burial. In the early stages of this monomania she tried to satisfy her cravings of bereavement, and by assisting in bathing and dressing the remains. These natural deaths came too infrequently to satisfy her, however, so she desperately started out to manufacture funerals by supplying the dead bodies.

She was paid by funeral parlor a tiny amount to be notified first of recent deaths.

She was only 14 at time of her apprehension. Ella had a passion for attending funerals. When a lull came about, offering no opportunities for her favorite form of amusement, she solved the problem by poisoning a number of children in series. She remarked with respect to the corpse one of her victims, Louisa Stormer who she said “made the prettiest corpse ever put under New York soil.”

It is a bizarre fact that Martha Needle spent most of the insurance money she gained from murdering her family on an elaborate grave for her family, which she visited almost every day.

The execution of this order met with unexpected difficulties. When the commission had the graves of the men who had died within the last few weeks opened, it became plain that the inscription on the graves had been falsified. The corpses of such persons as had born buried scarcely a month were quite decomposed. It was discovered that the crosses had been interchanged, obviously with a view to frustrating the judicial investigation. Consequently long and troublesome inquiries were necessary for the identification of any desired graves.

No one could have guessed that during her tenure at a Massachusetts hospital the amiable "Jolly Jane" was morbidly obsessed with autopsies, or that she conducted her own after-hours experiments on patients, deriving sexual satisfaction in their slow, agonizing deaths from poison. (Harold Schechter, Fatal)

In her flat her detectives say apparently the most cherished personal belonging was a big photograph of a well filled graveyard. They do not think it was preserved because of departed relatives, but simply because of the owner’s mental twist. This morbid characteristic is revealed likewise in the stories told the police by at least one undertaker in the small Illinois towns where Mrs. Vermilya lived prior to her residence in Chicago.

“I never saw such a woman for being anxious to work around dead bodies,” said E. M. Block, an undertaker at Barrington, in which town Mrs. Vermilya resided during their first marriage. “She actually seemed to enjoy it. I never employed her, but she went around and said she was working for me. at every death she would hear of it almost as soon as I, and wouldn’t be far behind me at the house to take care of the body. More than that, the woman seemed to glory in thinking about prospective deaths.”

She joked about discount for caskets.

When visiting a fabric store to purchase black material to make a dress for her fourth husband, Joseph Guszkowski’s funeral, the clerk offered her condolences and asked Tillie when her husband died. "My husband's," said Tillie. "When did he die?" “Ten days from now,” Tillie's next stop was at an undertaker's, where she bought the cheapest coffin in the place and had it delivered to the basement of the tenement. (Alan Hynd, Murder, Mayhem, And Mystery: An Album Of American Crime, 1958, p. 360)


“Sympathy for the seemingly grief-stricken widow governed Hauptrief’s actions. He gave her the solace of a home and the comforts of a cheerful fireside. Hauptrief heard of his wife’s confession to killing her first husband only a few days ago, as his condition had been too serious. ‘Annie’s grief at Court’s burial was natural and unassumed, as far as I could tell,’ Hauptrief said. ‘Clad in black, and with her young eyes rod from long weeping, my heart was filled with sympathy for her as she became near-hysterical when they begun throwing dirt into the grave.’ At four other funerals the woman was a living picture of a mother overcome with life’s sorrows.”

“I liked their funerals. I could get dressed up and see folks and talk to them. I didn’t miss a funeral in twenty years. The only fun I ever had was after I kilt people.”

Nurse – The only motive which the French police now hold in the mysterious poisoning of six persons by Antoinette Scierri, a nurse, is that she liked to see her victims’ death struggles. Although small sums of money were taken in several instances, it is believed that this was not the basic death motive. The nurse made wreaths for the graves of her victims and showed tender care during their last moments.


“I had feelings which would steal over me at times forcing me to destroy and kill. I felt funny and happy. I like to attend funerals.”

Nurse – Mrs. Gifford had a passion for death-beds and funerals of which she missed only one in 18 years. But just as youths sometimes become so overenthusiastic about running to fires that they finally get to setting some themselves, this death-bed fan, it is charged, could not resist the temptation, when anyone started to withdraw from the edge of the grave to just push him in with a little arsenic. She took command of the funerals too and liked to see everything done right, even going so far as to pay for the embalming of one of her victims.

It had been the custom each time one of her roomers died to have photographs made of the funeral showing her giving the corpse a final embrace.

“Marie Becker was known to attend the funerals of her victims and to gesticulate wildly her grief over their passing. She was convicted of murder and sentenced to life in prison.” [Jay Robert Nash, Look For the Woman, M. Evans and Company, Inc., 1981.]


A serial killer nurse who kept a rake, because, as she said: “I love raking freshly filled graves.”

“A weeping Christa Lehmann visited her dead friend’s family and told how the two bonbons she ate made her violently ill Saturday night. But she told the police a different story. After the funeral Christa threw a shovelful of earth on the dead woman’s grave and was taken into custody.”

One of her gruesome jests which led ultimately to police inquiries was voiced at a reception following her marriage last October to 76-year-old Ernest Wilson. A friend asked what she was going to do with a large number of cakes and sandwiches left over. “Keep them for the funeral,” she replied. Wilson laughed with the rest – and lived just 15 days more. Then it was recalled the widow of Windy Nook made another of her jokes at the registrar’s office, where she had been married and had then returned to record her husbands’ deaths. “There should be a discount for me,” she quipped.

Karla Homolka complained her parents spent too much on her sister’s funeral. She wanted the money to be spent on her upcoming wedding.

“Velma always attended the funerals of her victims and appeared to grieve genuinely for them.”

“Marybeth Tinning loves the attention she receives after her third child died of meningitis as a baby. To keep receiving that attention she quietly kills her other eight children over a span of years. She's seen as a woman with a series of unfortunate events, until she goes one step too far by smothering an adopted child.” [Wikipedia, “Deadly Women Episodes”]

Histrionic grief behavior at victim’s funerals: her own children. 9 deaths.

“She fainted during the first burial; during another, she was so overwhelmed by her emotions that she hurled herself to the ground.”  [Joyce Johnson, “Death Runs in the Family,” New York Magazine, Apr. 10, 1995, p. 58]

On November 3, 2009 a woman identified by police as “Sunday” was arrested in Juba in Southern Sudan after she was found in a cemetery near Konyo-Konyo market feasting on a corpse of a child.